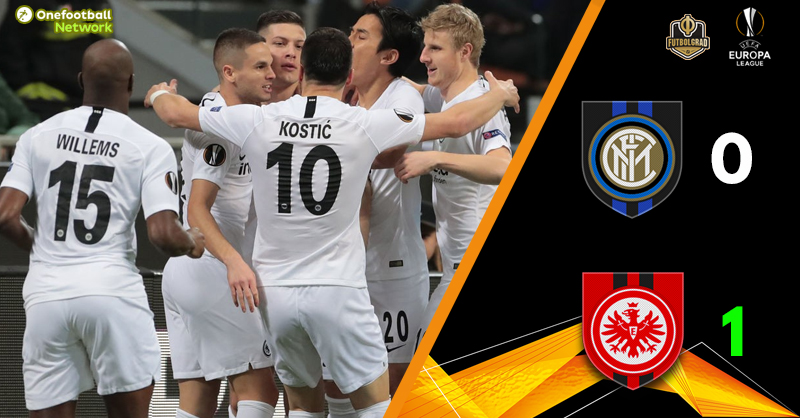 Inter Milan without a chance against wasteful Eintracht Frankfurt

Inter Milan v Frankfurt kicked off without Adi Hütter on the sideline. The Eintracht Frankfurt bench boss was suspended for the game after kicking over a water bottle in the first leg, not that it mattered his side was extremely professional seeing off an Inter side at ease despite only scoring once.

Frankfurt were pressing hard from the go, and within four minutes of the game, Sebastien Haller had hit the crossbar. The striker dived into a ball inside the box, and the ball bounced off the underside of the crossbar and stayed out. But Frankfurt did not dwell very long on the missed opportunity.

In the 5′ minute, Luka Jović broke away from Inter’s defence went one-v-one with Samir Handanović and managed to chip the keeper to make it 1-0. It was a brilliant strike by a striker in brilliant form at the moment.

It was a brilliant start by the Eagles that went a long way to settle any possible nerves Frankfurt may have had going into the game. In fact, it took Inter until the 30-minute mark to finally assert some pressure on Frankfurt’s backline. It was a situation that Frankfurt almost seemed to relish, the Eagles were sitting very deep now trying to hit the Italians on the counter.

Eintracht Frankfurt, in fact, should have doubled the lead in the 38′ minute. Going one-v-one after a breakaway from his own half Mijat Gaćinović only had Handanović to beat, but the keeper did well to stop first the shot and also scrambled out of his goal to get a hand on the ball before Haller could put away the rebound.

It was much of the same to start the second half. Inter pressing allowing Frankfurt to exploit the space when quickly transitioning through the middle third of the pitch and in the 55′ minute Handanović once again had to be on guard after Haller had broken through on the left, the keeper also had to on guard in the 60′ when Jović was allowed a shot from the edge of the box, then again in the 65′ minute when Filip Kostić tested him and Jović again in the 68′ minute.

With 70 minutes gone Frankfurt had several chances to put this game to bed. But the Eagles were not clinical enough in their forward runs and Inter somehow still in the game, even though they had only managed three shots on goal up to this point. In the 71′ minute, Inter finally produced a decent chance, but Milan Skriniar’s shot from the edge of the box was deflected and missed the far post by just inches.

Overall, however, as the last ten minutes approached it was a miracle that the game was finely balanced on Frankfurt’s 1-0 lead. The Eagles had plenty of opportunities breaking away over and over again without capitalising from their attacks.  Unbelievably in the 90′ minute, Handanović made another incredible stop this time on a diving header by Jović to keep his side in play.

Six minutes were added, in theory, enough time for Inter to come back. But instead, it was once again Handanović, who was at the centre of things. The Slovenian coming up with yet another stop in the 94′ minute to keep it at 1-0. At that point, Inter had to thank their goalkeeper it was not a more decisive score against an Eintracht Frankfurt that despite the narrow victory never seemed in doubt of advancing to the next round.

Eintracht Frankfurt are celebrating, but the man of the match wore an Inter Milan shirt. Goalkeeper Samir Handanović was impressive and the only reason the Italians had any chance throughout the 90 minutes. Time and time again the keeper stood tall to keep Frankfurt from scoring several goals, which would have perhaps better reflected the actual power balance on the pitch. 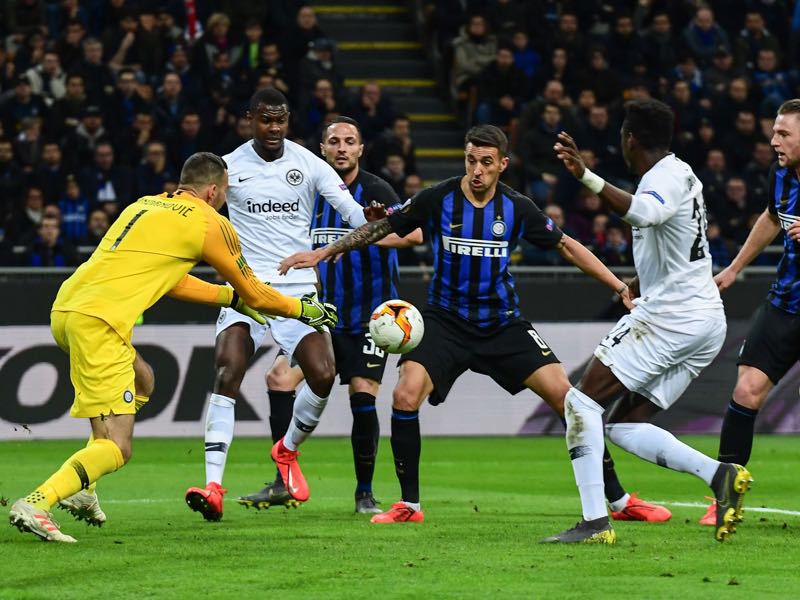 Wasteful! Eintracht Frankfurt completely dominated Inter Milan and had chance after chance to finish off this game much earlier. Handanović was a factor, but at the same time, Eintracht’s three-star attack left to many chances unused and against top teams in Europe that can be costly.