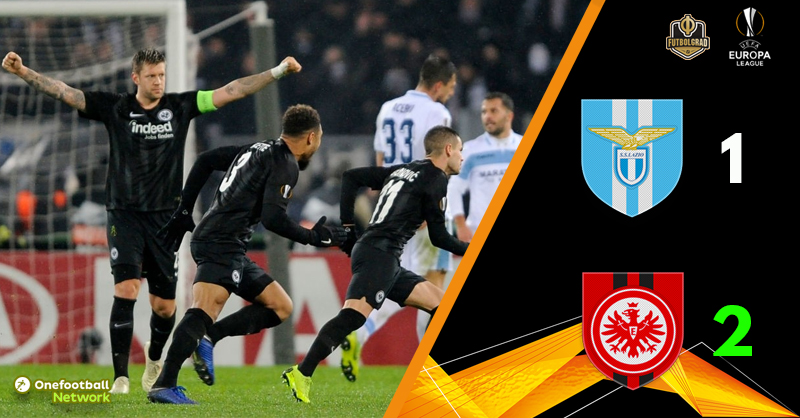 There was not much at stake at Lazio v Frankfurt both sides had already secured their passage to the next round. Furthermore, Frankfurt had already secured first in the group thanks to five wins out of five games, but no German side had ever managed to win all six of their group stage matches, and Frankfurt wanted to do exactly that and in the end, managed a famous win in Italy despite going down by a goal in the second half.

Eintracht Frankfurt were the more active side in the first ten minutes. But it took until the 12′ minute for Frankfurt to produce their first chance. Nicolai Müller won the ball with the back to the goal following a Frankfurt corner, quickly turned but could not beat Lazio keeper Silvio Proto.

Müller was also at the centre of things as Frankfurt produced their next chance in the 24′ minute. Mijat Gacinovic played a ball from the left to the middle of the box where Müller had his shot blocked at the last moment.

Lazio then had their first big chance in the 29′ minute when Joaquin Correa had beaten Makoto Hasebe on a sprint on the left-wing but while Correa was going past the Japanese international Hasebe immediately showed that he had pulled his hamstring. What followed was a gesture of fairness by Correa, who played the ball out despite being in a good position to score.

Hasebe had to be taken off, and Evan Ndicka came on to replace him. Perhaps it was that substitution, but Frankfurt now sat deeper then they did in the first 30 minutes allowing Lazio to boss possession and looking to hit the Roman on the counter-attack and while Frankfurt had opportunities to break forward dangerously die Adler lacked the conviction to finish of one of their attacks.

Within ten minutes of the first half, Lazio took the lead. Luis Alberto won the ball in midfield and played a perfect pass through the channel that found Correa streaking away into the penalty box and curl a shot past goalkeeper Frederik Rönnow in the 55′ minute.

How would Frankfurt respond? Die Adler started to now press forward with great numbers, and Nicolai Müller saw a shot blocked at the last moment by Luis Felipe in the 64′ minute. But Just one minute later in the 65′ minute, the ball was in the net.

Lazio were able to defend the corner from the Felipe block, but the ball then fell to Gacinovic outside the box. The Serbian forward stepped past two defenders and then unleashed a shot from 20-yards that curled into the far corner of Proto’s goal.

The game now opened up completely. Rönnow stopped Luis Alberto after breaking away from Frankfurt’s defence in the 67′ minute in what was a similar situation to Lazio’s opening goal. Instead, Eintracht Frankfurt would score the next goal.

Müller played a ball to centre to Sebastien Haller, who spotted Gacinovic open on the right, the forward played the ball off to his Serbian partner and continued the run. Then receiving the ball back just outside the six-yard box Haller made no mistake to slot the ball into Proto’s goal in what was a fantastic move by Frankfurt.

Frankfurt were looking for more. In the 73′ Müller was denied by Proto after going one-v-one with the keeper. The striker was then taken off and replaced with Luka Jovic, who had his first chance of the game in 83′ minute but a Lazio defender blocked his shot inside the box.

Lazio had one final chance to prevent Frankfurt to make it six wins out of six Europa League games when they were awarded a freekick on the edge of the box in the 90′ minute. Luis Alberto stepped up and found an opening in the wall, but the shot ended up in goalkeeper Rönnow’s hands.

Mijat Gacinovic was the player of the game. Starting the match just behind nominal forward Sebastien Haller the Serbian forward scored a beautiful equaliser and also assisted Haller’s goal that won Eintracht the game. Gacinovic highlights the depth that Frankfurt have behind the nominal attacking trio of Ante Rebic, Haller and Luka Jovic. 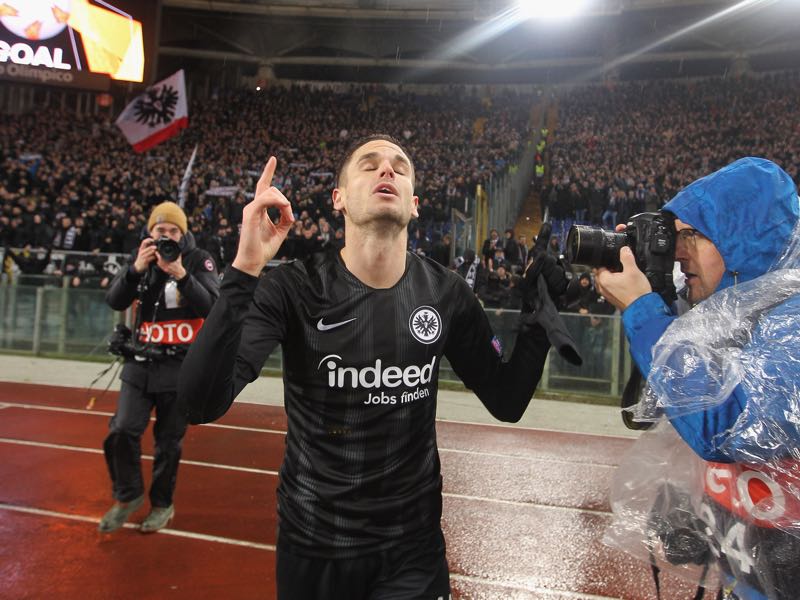 Frankfurt’s European campaign continues to impress. On the field, Frankfurt have now become the first German team to win six out of six Europa League group stage matches. But it is not just on the pitch that Frankfurt impress. Eintracht fans have embraced the competition with open arms, and 10,000 SGE fans were in Rome to celebrate their club’s success in Europe thus far this season. While many clubs from the bigger European leagues seem to shrug off the Europa League as a second-rate competition, Frankfurt have embraced a competition that deserves more attention overall.