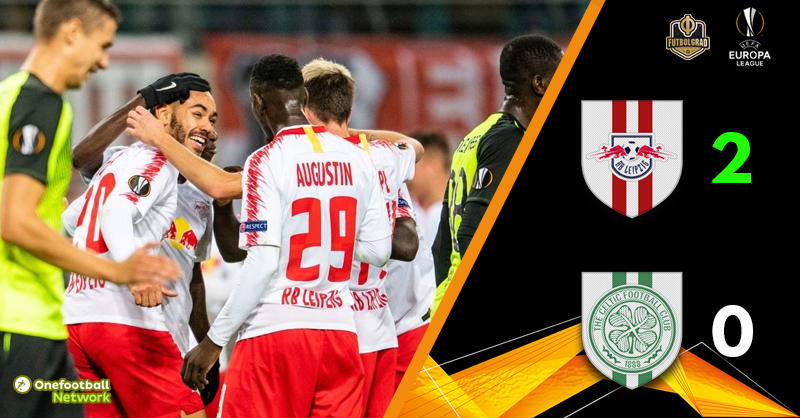 Leipzig dominate Celtic in 2-0 win at the RB Arena

Scottish side Celtic have never won on German soil. A record that the Bhoys wanted to rectify against die Roten Bullen. But Leipzig v Celtic ended up in a decisive victory for the German side with Leipzig winning 2-0.

Leipzig were pressing from the getgo, but it was up to Celtic to produce the first chance. A quick ball forward in the 7′ minute saw Odsonne Edouard break into the box where he turned Dayot Upamecano inside out and then unleashed a low drive that beat Yvon Mvogo but also zipped past the far post.

The Germans struggled in the early going to break down a well organised Celtic side. Eboue Kouassi, in particular, did well to drop back to fill any holes that were created by Leipzig’s pressing play at the centre of the pitch. The Ivorian midfielder then pressed forward whenever winning the ball making Celtic dangerous on the counter.

It was a cononundrum that took Leipzig some time to solve. Ultimately, their solution was to stretch Celtic by playing more over either wing. It was a strategy that worked. In the 32′ minute, Marcel Sabitzer played a long ball from the right to the centre where Celtic had switched off for just a moment, just enough to let Matheus Cunha score with a wonderful volley.

That goal opened the floodgates. In the 35′ minute, Leipzig had doubled the lead. This time Marcelo Saracchi delivered the ball from the left, Celtic’s defence made a meal of the ball in the centre, allowing Bruma to score from close-range. Leipzig remained relentless, and Celtic were lucky to walk into the dressing room just two goals down.

Leipzig continued to raid Celtic’s backline by playing fast direct football on either wing. In the 46′ minute, Jean-Kevin Augustin missed the ball from close range after breaking through on the left and in the 47′ Kevin Kampl missed from the same spot after he received a cross from Lukas Klostermann.

Konrad Laimer was the next to prob Celtic’s backline. Slaloming through the Bhoys’ backline in the 54′ minute Laimer went one-v-one with keeper Craig Gordon but much to the relief of the 5,000 travelling Celtic supporters the Austrian missed the target. Leipzig kept coming, and in the 64′ minute Augustin broke into the box, and his hard shot was redirected by Gordon to hit the post.

Celtic hung on for their dear lives and were slowly but surely able to stem against Leipzig’s attacks. The Germans, in the meantime, seemed to almost settle for the result and for 15 minutes slowed the match down. Leipzig’s head focused on the weekend fixture Celtic almost got back into the match in the 85′ minute. Edouard found himself with space in the box, but Mvogo had left his line and denied the Celtic striker with a beautiful stretched out save.

Kevin Kampl was the man of the match. The central midfielder anchored RB Leipzig’s midfield an initiated many of the attacks on either flank. The Slovenian national team player completed 84.7% of his 50 passes and won five of his six duels. Kampl made three key passes throughout the game and was dangerous in the attacking third as well as fantastic in his third where he made one clearance and two interceptions. 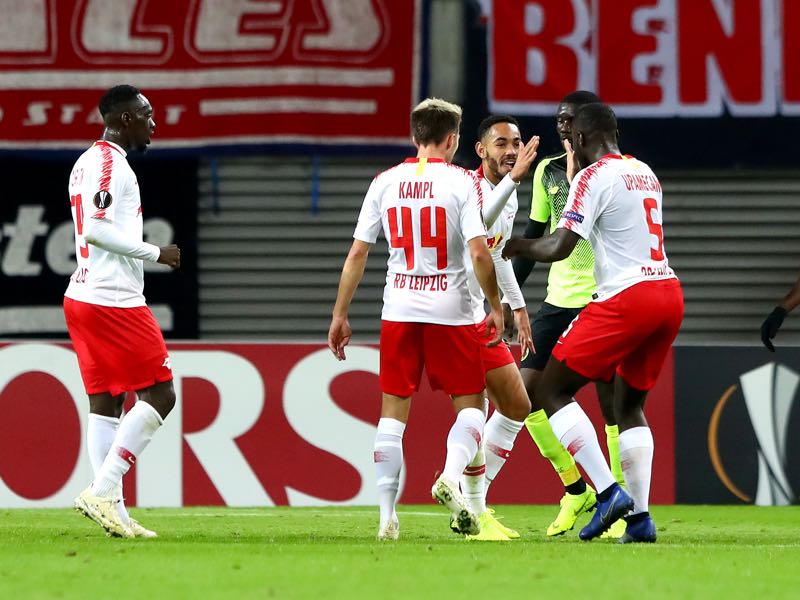 The result may have been just 2-0, which in theory, gives Celtic a fighting chance in the group should they beat Leipzig decisively in two weeks at the Paradise in Glasgow. In truth, however, the gulf between the two sides in this match makes it hard to believe that the Scots can produce a positive result in two weeks. Leipzig’s only weakness tonight was their efficiency in front of goal as die Roten Bullen should have scored four or five goals against a Celtic side lacking ideas.