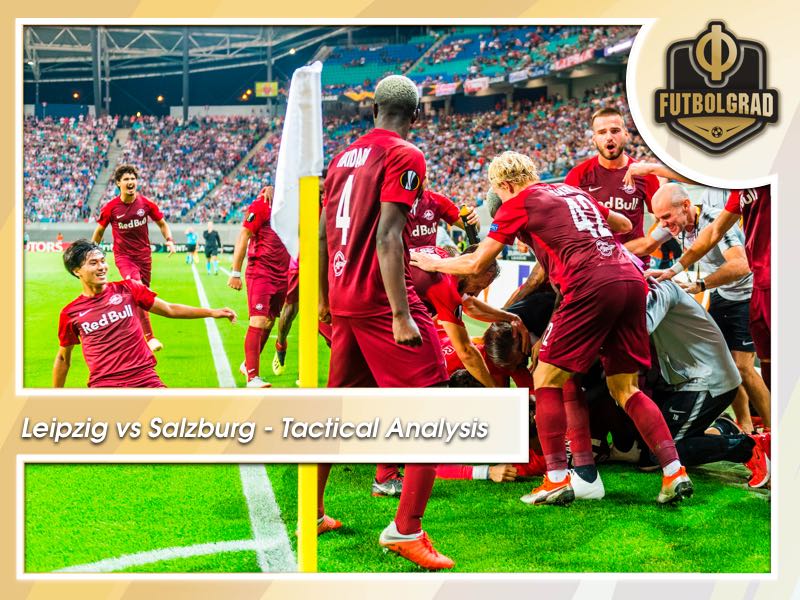 Matchday one featured a host of exciting teams and matchups with the likes of Chelsea, Marseille, Arsenal, AC Milan, Sevilla and Celtic all involved but the most eagerly anticipated match of the evening was most certainly: RB Leipzig vs FC Salzburg.

RasenBallsport Leipzig came off a hard-fought victory against Hannover last weekend. Timo Werner scored a brace while Emil Forsberg grabbed two assists. The East German side had a rocky start to the season with two wins, two draws and one loss in their last five games. A rampant Borussia Dortmund side ran riot and ended up being 4-1 winners last month.

Red Bull Salzburg entered the competition in a good form with three wins and two draws from their last five games. Two 3-1 wins against St Pölten and Admira promised us goals from the Austrian team who were able to field a relatively strong first eleven for the Red Bull Derby.

RB Leipzig & Red Bull Salzburg lined up in a 4-1-2-1-2 formation with Leipzig missing influential striker, Timo Werner and attacking wing back, Marcelo Saracchi through injury with playmaker Emil Forsberg only fit enough for the bench. This narrow formation results in the wingbacks providing width for both teams. The midfield battle was crucial which would decide the outcome of the game.

The game had a youthful look to it with 11 under-23 players starting in the Red Bull clash.

Die Rotten Bullen tends to press high up the pitch with their forward line ushering the ball into the wing backs. The two wing backs are the primary source of width when playing a narrow 4-1-2-1-2 or 4-3-1-2 formation. Konrad Laimer, a natural central midfielder was placed at right back and was positioned higher up the pitch. His positional play was exposed due to the lacklustre performance from the midfield who failed to win the ball back effectively. This originated from the two forwards – Jean-Kévin Augustin and Bruma – failing to pressure the Salzburg defenders.

Red Bull Salzburg took advantage of the situation and exposed the abundance of space in behind Konrad Laimer. The Austrian right-back was caught out time and time against the pace of Munas Dabbur and Reinhold Yabo who played off the shoulder of the defence. RB Salzburg’s midfield attempted a variety of deliveries for the quick forwards during the build up.

Reinhold Yabo has taken up a position in between the centre back and left back with neither player close to him. This meant Amadou Haidara was unmarked and had a free run into the box.

Andreas Ulmer’s pass to Hannes Wolf allowed him to play a quick one-two combination and allowed the left back to run into space with Konrad Laimer caught out of position, indirectly allowing three players to make a run into the box. We can see the vast amount of space the attackers can run into.

The speed, at which RB Salzburg played, disrupted their rhythm and capitalised on the shaky start made by the Leipzig defence. A positive outcome for the attacking team who scored thanks to Haidara’s late run. But, this was not the first time the Leipzig right-back was caught out of position in the first half.

RB Leipzig usually employs a high defensive line to complement their high counter-pressing style allowing the midfield and attack to win the ball back further up the field, especially in the full-back areas. Their ball retention data proves their knack to usher the ball wide triggering the midfield four and two strikers to close in on the opposition ball carrier.

However, the ramifications of keeping a high line can be devastating if not properly paid attention to.

The Leipzig defence maintained a high line and were punished by the Salzburg forwards in both halves. The first image shows Reinhold Yabo in space between the two defenders with space to run into. Pressure-induced by Hannes Wolf caused a misplaced pass from the midfielder allowing both Yabo and Dabbur to make a run.

With players out of position, it makes it much more difficult for defenders to recover and reposition themselves to prevent the counter-attack. This makes Laimer’s positioning even more crucial to stop the threat of the counter-attack.

In the dying minutes of the game, RB Leipzig committed men forward in search of a winner with the two centre-backs positioning themselves much closer to the halfway line. Even with their pace, the Dayot Upamecano and Ibrahima Konaté were unable to prevent Wolf and second-half substitute, Fredrik Gulbrandsen from racing past them.

Ralf Rangnick made wholesale changes at half-time bringing on Yussuf Poulsen, Marcel Halstenberg and Diego Demme to inject some physicality and pace into Leipzig’s game.

Rangnick changed the role of Kevin Kampl and Konrad Laimer giving Leipzig the impetus to stage an incredible comeback. Laimer was asked to play further upfield, acting as an auxiliary right winger becoming a constant threat nullifying Salzburg’s threat from left back. Diego Demme excels at reading the game from a defensive midfield position. Laimer’s tenacity put the Ulmer under pressure when he eventually lost the ball and the Austrian was able to capitalise and bring Die Rotten Bullen back into the game.

Kevin Kampl started the game as a deep central midfielder, recycling possession and making forward passes but was asked to play the role of a Mezzala in the second half. The Mezzala is a roaming playmaker who plays in the half spaces between an orthodox central midfielder and winger.

Kampl transformed into an effective winger-midfielder hybrid, operating in the channels providing an extra layer of width, and another crossing option for Danish forward Poulsen.

Kampl’s persistence yielded results. His wider position was not tracked by the Salzburg midfield giving him enough time and space to produce a pinpoint cross to Yussuf Poulsen who obliged with a bullet header to draw the game level at 2-2 in the 83rd minute.

This was truly a game of two halves. Red Bull Salzburg utterly dominated the first half with their positioning, pace and work rate. The midfield quadrant ran the show and denied the Leipzig midfielders and defenders any room to breathe putting under immense pressure. The East German club were much improved in the second half with Ralf Rangnick showing his ingenuity and tactical nous to stage an incredible comeback but costly mistakes from their young backline ultimately lost them the game.

This was not a true showing of RB Leipzig’s potential who were missing three of their most influential players in Werner, Sarrachi and Forsberg through injury. Though, nothing should be taken away from the Austrian Champions who played to their strengths and proved why they should not be a forced to be reckoned with.