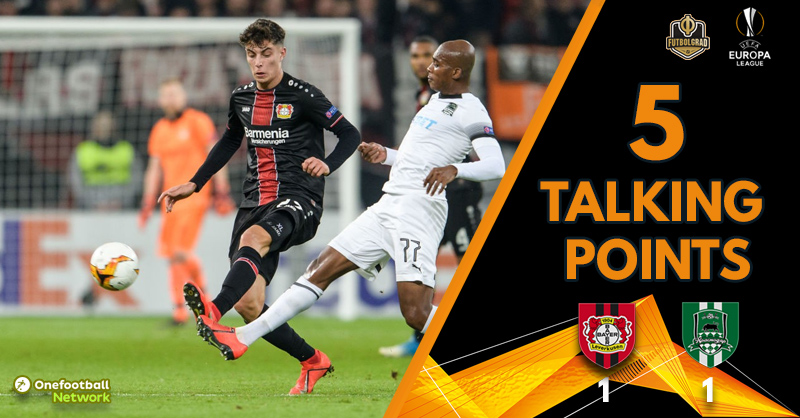 Leverkusen crash out of Europe, Krasnodar on the up

BayArena – Leverkusen v Krasnodar – Bayer Leverkusen’s Europa League campaign is over after a 1-1 draw against FK Krasnodar. The Werkself fell behind after Shapi Suleymanov’s late free-kick, and despite equalising through Charles Aránguiz, they couldn’t find a winner and were eliminated on away goals.

European dreams are over

The longer the match remained 0-0, the longer a Krasnodar goal could have serious implications. Just when it seemed that extra time was imminent, Julian Baumgartlinger’s error in a dangerous position gave the Russian club a free kick with 19-year-old Shapi Suleymanov making no mistake.

Leverkusen bombed forward and gave themselves a chance through Charles Aránguiz, but it was too little too late as Bosz’s side paid the price for a disjointed performance. Optimists may say it’s a blessing in disguise with a top-six spot in the Bundesliga up for grabs, but there is no hiding the fact that this was an opportunity squandered.

How did it happen?

Peter Bosz replaced the injured Karim Bellarabi with Lucas Alario which forced Kevin Volland out wide, the only change from the team that completely dominated Fortuna Dusseldorf on Sunday. Leverkusen’s high press created some opportunities with Leon Bailey looking the likeliest as the winger combined well with Julian Brandt.

Volland’s cross saw Alario go close, but the Werkself were having difficulty preventing Krasnodar on the counter-attack. Wanderson broke clear and found Viktor Claesson who forced a fine save from Lukas Hradecky which was the best chance of the first half. 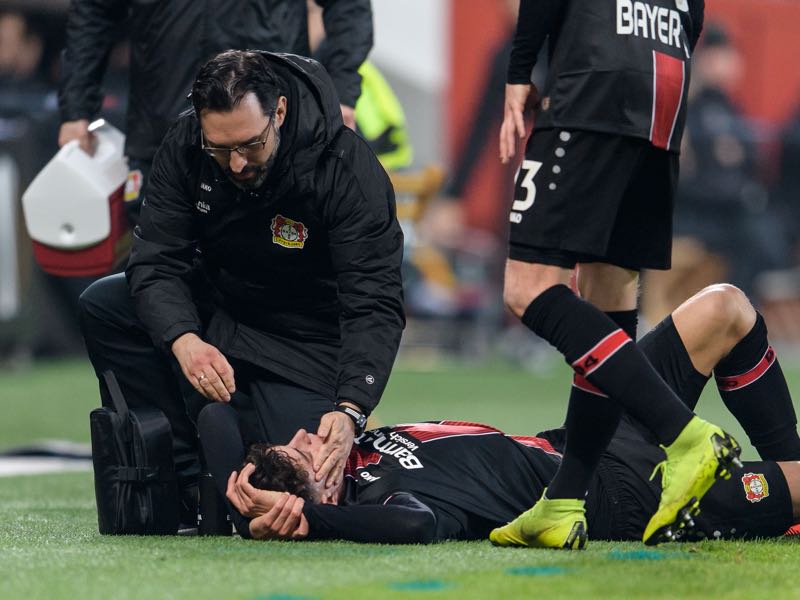 Leverkusen v Krasnodar – Kai Havertz of Bayer Leverkusen gets medical assistance during the UEFA Europa League Round of 32: Second Leg match between Bayer 04 Leverkusen and FK Krasnodar at the BayArena on February 21, 2019 in Leverkusen, Germany. (Photo by Jörg Schüler/Getty Images)

Leverkusen improved their combination play in the second half and had a great chance after Jonathan Tah’s through ball found Alario. The Argentine’s shot took a deflection and beat Matvey Safonov, but the ball bounced off the crossbar.

Extra time appeared imminent until Julian Baumgartlinger lost possession on the edge of the box and committed a sloppy foul. Shapi Suleymanov curled it home which forced the hosts into action, Bailey hitting the side netting before Araguiz powered a shot into the bottom corner but there was insufficient time to find a winner.

Kai Havertz was involved in a heavy collision in the first half which seemed to rattle the 19-year-old. He didn’t have the impact we have become accustomed to after failing to spot several promising runs from Volland.

Havertz shot well wide after Aranguiz went on a great solo run and was withdrawn for Julian Baumgartlinger in the 66th minute. It highlights how important Havertz has become at Leverkusen because when he is at his best, has proved to be virtually unplayable.

Anyone who underestimated Krasnodar would have been pleasantly surprised by their individual and collective ability. Much is made about the Russian winter break and a potential lack of fitness and sharpness – we might have seen that come to fruition in extra time – but Krasnodar showed that they are a quality team who fully deserve to be in the round of 16.

Viktor Claesson, Ivan Ignatyev and Mauricio Pereyra had chances early on with Wanderson looking dangerous on the break. Krasnodar were confident, competent and had executed a solid game plan designed by 35-year-old manager Murad Musaev.

Ignatyev had a header saved, and Claesson should have scored before half-time when through one-v-one against Hradecky. Musaev’s second-half substitutions made a difference and there are a number of experienced and promising players in his squad.

Krasnodar on the up

This was a significant win for the unfancied Russian club who showed that they are getting things right on and off the pitch. Musaev’s stock is rising rapidly, and he could have a very bright managerial career ahead of him.

Striker Ivan Ignatyev is just 20-years-old, goalkeeper Matvey Safonov is 19 as is goalscorer Suleymanov who has an outstanding strike rate coming off the bench.  Defenders Aleksandr Martynovich and Cristian Ramírez performed well in front of defensive midfielder Charles Kaboré who impressed over both legs. 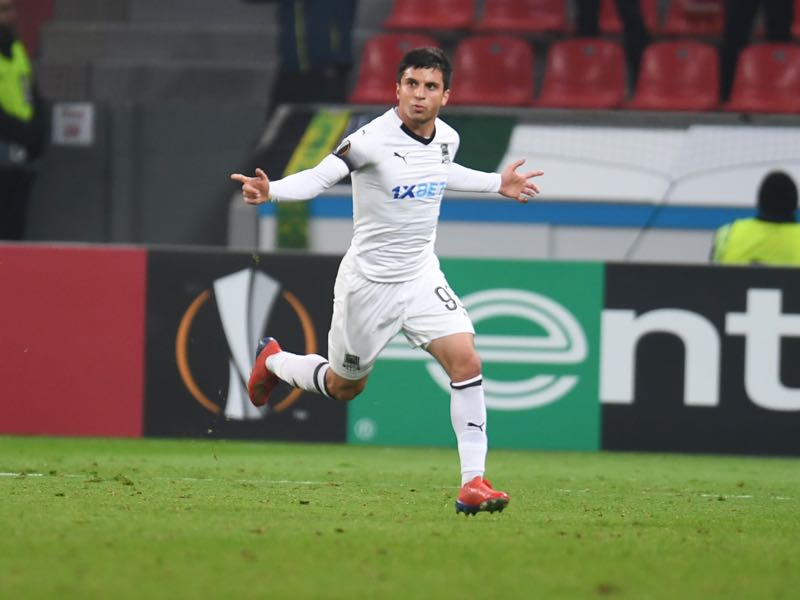 Yuri Gazinskiy and Viktor Claesson showcased their skills for Russia and Sweden at the World Cup and added a touch of class. Wanderson was a danger throughout and Krasnodar did it all without their most productive player in 33-year-old Brazilian striker Ari.

Write them off at your peril, but they have plenty of potential, and a kind draw could see their Europa League adventure continue for some time yet.