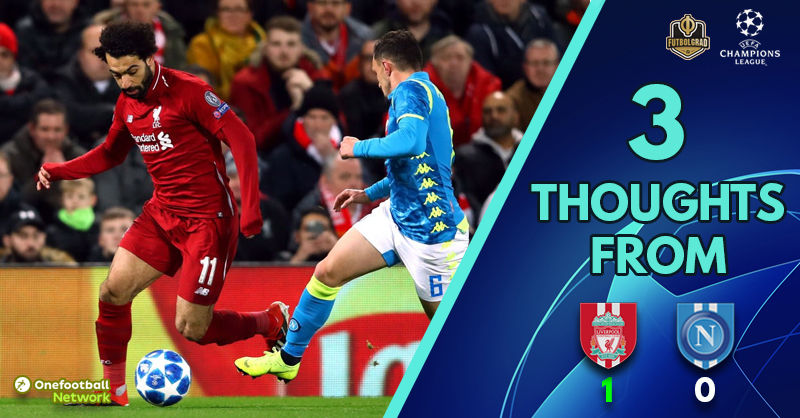 Liverpool vs Napoli may have ended with just the one goal, but the match-up was a gripping encounter that had everything needed to make it a memorable occasion, especially for those in Red.

Liverpool vs Napoli : A thrilling encounter 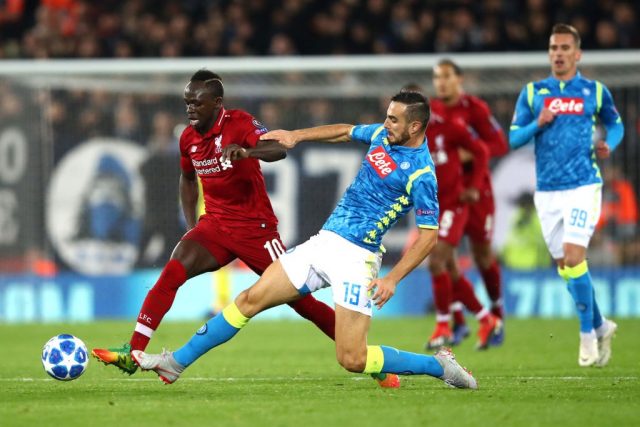 Sadio Mane and Nikola Maksimovic battle for the ball during Liverpool vs Napoli Anfield. (Photo by Clive Brunskill/Getty Images)

When you envisage a Champions League fixture, the thoughts conjured up are moments of brilliance, fast flowing attacking football and an atmosphere in the stands to match.

This game had all the ingredients and come the final whistle, those inside Anfield – and those watching around the world on television – had witnessed a wonderful game full of drama.

Liverpool had to win by one-nil, if Napoli scored they needed a victory by two clear goals. The chances for both sides could have thrown up a final scoreline of 5:3 such were the opportunities.

Sadio Mane spurned a number of chances. Had Liverpool been knocked out the Senegalese forward would have had a sleepless night, he should of walked away with the match ball.

The closest the visitors got to their all important goal was via Arkadiusz Milik, the Poland international denied by Liverpool’s Alisson in the 93rd minute.

It was a wonderful save but in truth, the 24-year-old should have broken Red hearts with his added time one-on-one.

Big games require big players, and for the hosts it was two ex-AS Roma players who shone the brightest. With Liverpool needing a goal it was no surprise it came via Mohamed Salah.

The Egyptian rolled Mário Rui, side stepped Kalidou Koulibaly beautifully then slotted the ball past Ospina. It was the Salah of last season, doubted by some since August he emphatically answered them with a goal worthy of winning any game.

If the goal was worthy of winning a game, then at the opposite end of the field deep into added time, Brazilian goalkeeper Alisson provided a moment just as equal to Salah’s.

The 26-year-old was signed by Liverpool in the summer at a cost of £65 million, in the 93rd minute he showed why the Reds moved heaven and earth to bring him in.

Stopping Milik by spreading his frame, he became twice as wide and the Napoil hit-man fluffed his lines. At the end of the match Jürgen Klopp joked that if he knew just how good his ‘keeper was, he’d have paid AS Roma double the price.

Liverpool vs Napoli : What next? 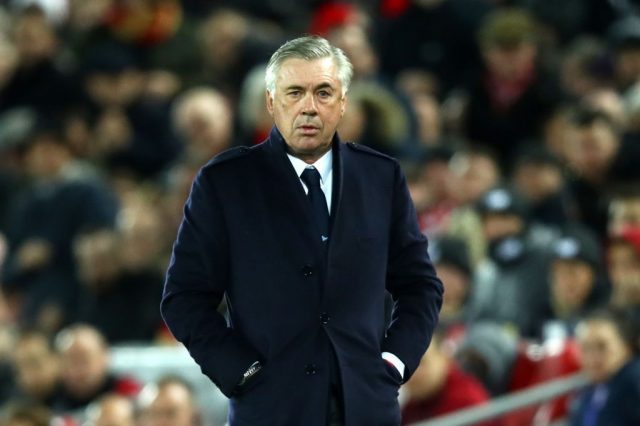 Carlo Ancelotti, looks on during Liverpool vs Napoli. Next up for the Italian coach is the Europa League. (Photo by Clive Brunskill/Getty Images)

Carlo Ancelotti commented at the end of Matchday Five that his side would be ‘stupid’ not to progress from Group C. Whether he meant in the Champions League, or Europe in total, is up for discussion – however, Napoli must be regarded as one of the Europa League’s most fancied sides now they have entered the competition.

Their attacking play is backed up by a defence that – on the whole – has shown it can compete at this level, while Ancelotti himself has an honours list that is the envy of many a coach.

Liverpool just missed out on the biggest prize last season, and even with a change in tempo have shown that they are still a side to be reckoned with.

They will though, have to address their away form in this competition. Three away defeats this season fall off the back of two during the last campaign.

Factor in that Virgil Van Dijk is suspended for the fist leg of the Round of 16, and the Reds will have to be at their best come the spring if they are away for game one.