After Santiago Ascacíbar’s move to VfB Stuttgart last week in what was the club’s biggest ever transfer, the Bundesliga is likely to welcome another Argentinian by the end of the week as the transfer of Lucas Alario from River Plate to Bayer 04 Leverkusen has been unofficially confirmed by his agent yesterday. According to the player’s agent, the move is “already completed”, the contract is signed, and it is only a matter of time until Leverkusen trigger the release clause of €18 million to acquire the services of the lethal front man.

Despite the fact that the transfer seemed to be all but concluded there are still many complications. Lucas Alario’s transfer to Bayer Leverkusen is, in fact, turning into a sort of telenovela.

With the closing stages of the European transfer window already upon us, the most interesting part of this period loathed by some and patiently awaited by others has finally commenced. A series of weeks in which speculation emerges among football fans, players and managers alike as the teams from all over the world are allowed to modify their squads whether by adding new talent or by getting rid of those who are no longer useful to their particular cause. However, it is only this final part of the transfer window that gathers most of the attention due to the nature of its signings: the most awaited and the less expected. 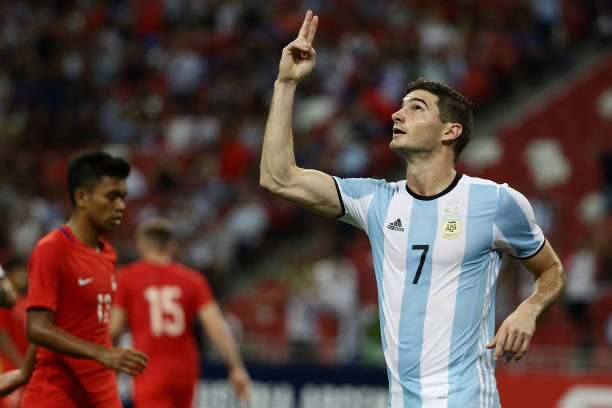 Lucas Alario is one of many talented Argentine players coming through the ranks at the moment. (Photo by Suhaimi Abdullah/Getty Images)

In South America, this period in-between seasons is hardly ever a pleasant time. All the top clubs on the continent are almost entirely dismantled year after year—since very few can manage to resist the lunge of European capitals and their opportunities.

Inevitably after the rise of Argentina’s new premium selection of high-quality players and the aforementioned nature of the game on the continent, the transfer window becomes a feast for Europe. Comparable to Latin American tourists on holiday in Miami, most European teams bring their trolleys from across the ocean and enter the mall that is the Argentine league looking for top quality products at amazingly affordable prices.

Even though he has already posed wearing a Leverkusen jersey, Alario’s future is still a mystery, for not a single part of the move is official yet because the two clubs have not come to an agreement.

Only days ago, when even some River fans believed the transfer threat was over and they remained confident that the team would not lose any more key pieces like Sebastián Driussi, information of Lucas Alario undergoing a medical that River never authorised made the alarms go off in the northern part of Buenos Aires. Soon after, pictures of the player wearing a Leverkusen’s jersey and holding another one showing his likely future squad number on the reverse of it caused mayhem within the River world, with a powerful demonstration of anger and a terrible sense of loss from the fans. This attitude was considered improper by the club and its supporters, to which Alario’s agent responded: “He is not happy about the way he is leaving, but it was the only way out”. This is when, according to the agent, Alario signed a contract that will make him a Leverkusen player for the next five years.

Back in February, Lucas Alario received a rather tempting offer from China, which he turned down without hesitating in the hopes of earning a significant move abroad shortly. Apparently, his decision was the correct one since two top Bundesliga sides have already shown interest in him as Borussia Dortmund had already scouted the player a month before Leverkusen got in contact with him and convinced him of signing for Heiko Herrlich’s side.

River Plate obviously are not satisfied with the way things were handled and is now threatening to take the case to FIFA’s authorities questioning an alleged violation of a principle in the association’s transfer regulations (article 16) which states that a contract cannot be unilaterally rescinded should the affected club be already competing officially. With the team weeks away of facing the CONMEBOL Libertadores quarter-finals and the Argentine Superliga already underway, River is trying to avoid the loss of their hitman. They are therefore recurring to legal action and therefore accusing Bayer 04 Leverkusen of also violating the article 17 of the transfer regulation, arguing the German team might have induced Alario to break his contract in the middle of an official competition.

Will Alario Make it in Time to the Bundesliga?

While the player’s side remains confident that the deal will happen, River Plate’s position seems quite rigid. In fact, they have refused to provide their bank account information to Bayer 04 Leverkusen in what is another episode of the wonderfully bizarre world of South American football.

The German club have already done everything in their power to make the transfer happen and as it seems they have also played their cards very well. However, they could not have done it on their own since the player’s agent has played a significant role in this scandal. According to the press, he was the one who advised Leverkusen to buy Colón de Santa Fe´s share of Alario’s transfer (40%), something that will certainly put some pressure on River’s side. 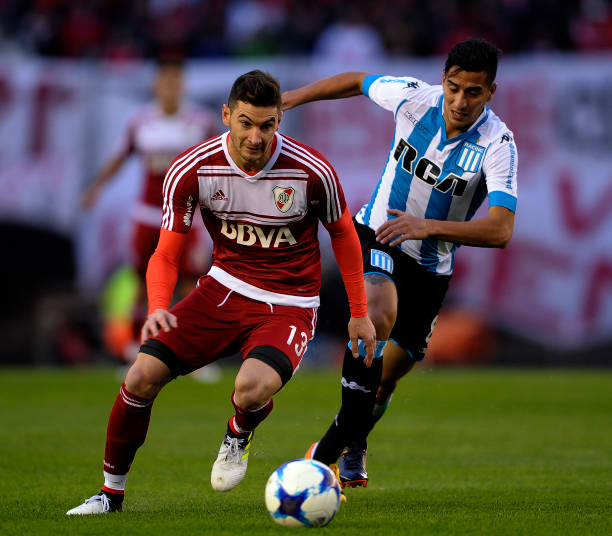 Lucas Alario (l.) is one of many key players on his way out of River Plate this summer. (ALEJANDRO PAGNI/AFP/Getty Images)

The most interesting part of this quarrel is that the transfer window closes on September 31, in less than 24 hours. Will Leverkusen manage to register Alario in time? Apparently, they will, for they already have a signed contract at their disposal. However, will they be allowed to deposit the payment? That remains uncertain as of yet and currently constitutes Leverkusen’s primary concern and the player is already trying to get the operation done through AFA instead of River with a formal complaint. Nevertheless, even if the transfer happens, legal sanctions could be on the way for the German club.

Both parts have already stated their opinions on the matter and are waiting for responses from the authorities:

It certainly looks like we are in for a proper thriller approaching the end of the transfer window. Lucas Alario will inevitably move to Bayer Leverkusen (stay tuned for his scouting report on fussballstadt.com). In the meantime, enjoy the last chapters of this great telenovela.