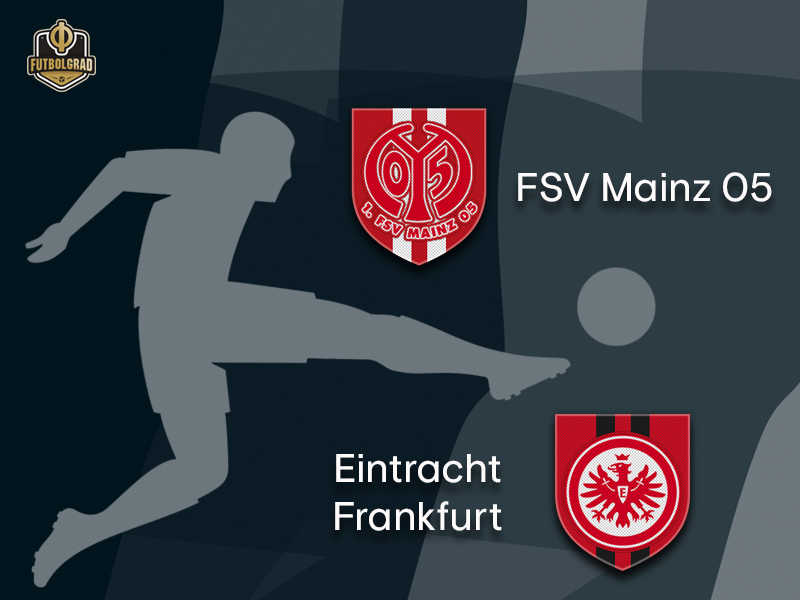 Mainz vs Frankfurt will take place at the Opel Arena in Mainz. (Photo by Simon Hofmann/Bongarts/Getty Images)

The Rhein-Main-Derby between Mainz and Frankfurt will kickoff on Wednesday night at the Opel Arena in Mainz. It is not one of the biggest derbies in German football as the matchup simply lacks the historical foundation for a major rivalry. Nonetheless, it is a game that in recent years has seen plenty of historical matchups.

Last season Frankfurt eliminated Mainz in the quarterfinals on their way to the DFB Pokal Final and ultimate victory over Bayern. Two years before that Frankfurt would have been relegated had they not won 2-1 thanks to a fortunate goal in the last minute. Those tables were reversed in May 2017 when Mainz turned around a 2-0 deficit on the second last game of the season to avoid relegation.

Such drama is unlikely at this stage of the season. Furthermore, both sides have played good campaigns this season. Mainz had collected 19 points from the first 14 games and were starting to eye up the upper end of the table. Those ambitions were quickly silenced after a heavy 4-1 defeat to RB Leipzig on the weekend.

Mainz were not poor, but Leipzig were more efficient on Sunday. “The defeat was not necessary,” sporting director Rouven Schröder told kicker after the match. “Our performance was actually alright, but the result is frustrating,” head coach Sandro Schwarz added. Mainz are in the middle of a restructuring and have brought in many young players ahead of the season and, as a result, have shown signs of inconsistency.

An inconsistency that the side wants to shut off against rivals Eintracht Frankfurt. “We want to do it better than in the Cup defeat last season. We will tear down this house and get the fans to provide the energy to collect all three points,” midfielder Danny Latza promised. Sporting director Schröder believes that the unnecessary defeat to Leipzig will provide further motivation.

Motivation that will be necessary against an Eintracht Frankfurt side that is back on track after two unnecessary defeats to Wolfsburg and Hertha. But a midweek win against Lazio – making Frankfurt the first German club to win six out of six group stage matches in Europe – and a 2-1 win against Bayer Leverkusen means that die Adler are once again soaring high.

The only piece of bad news is that Frankfurt will be without centre-back Makoto Hasebe. The Japanese midfielder/defender, who renewed his contract on the weekend, picked up a knock against Lazio. “The way he plays and reads the game is unbelievable. There is no-one better. He is a key player for us and one of the most intelligent defenders in the Bundesliga,” Frankfurt head coach Adi Hütter said about the 34-year-old, who only seems to get better with age.

Against Bayer Carlos Salcedo, Simon Falette and Evan N’Dicka held the defence together but without Hasebe lacked the buildup play and the routine to completely shut down die Werkself. Mainz could exploit the absence of Hasebe but given Frankfurt’s attacking power, 32 goals in 15 games, die Adler should have enough to win the Rhein-Main-Derby.

Mainz vs Frankfurt  – Players to look out for:

Jean-Philippe Mateta has been a brilliant signing for Mainz. The French striker, who spent the last season on loan at Ligue 2 side Le Havre, was signed for €8 million from Olympique Lyon this summer. A tall and lanky forward the striker adapted relatively fast to live in the Bundesliga scoring four goals and one assist in 15 Bundesliga matches. An absolute weapon on high balls Mateta has won 44.1% of his on average 9.42 aerial duels and could provide plenty of problems for an Eintracht side that will be without the experienced Hasebe in this match.

ean-Philippe Mateta of Mainz controls the ball during the Bundesliga match between 1. FSV Mainz 05 and Hannover 96 at Opel Arena on December 9, 2018 in Mainz, Germany. (Photo by Simon Hofmann/Bongarts/Getty Images)

Filip Kostić finally scored his first goal for Eintracht Frankfurt this weekend. The Serbian winger has been somewhat re-invented by Adi Hütter. Signed from Hamburger SV, the Serbian winger managed to be relegated twice in the last two years (Stuttgart 2017, Hamburg 2018). A fate that is unlikely to befall him in Frankfurt. In fact, in Frankfurt, he wants to fulfil his dream of playing in the Champions League. “My dream is to finish in the top four and play in the Champions League,” Kostić told the media this week. Under Hütter the winger has been moved further back and now operates mostly as a wing-back in Frankfurt’s 3-4-3 system, it is a role that suits him as he managed to complete 80% of his on average 4.14 dribbles a game and also completes 36.2% of his on average 5.85 crosses per game making Kostić a fantastic weapon on the flank.