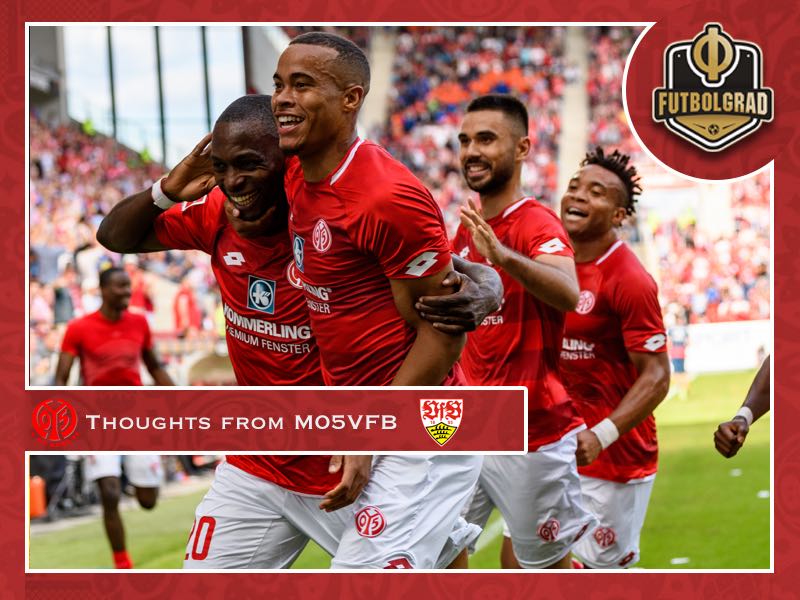 Mainz got their Bundesliga season off to a positive start with a 1-0 win against VfB Stuttgart in a tight match at the Opel Arena. Robin Quaison beat Holger Badstuber to set up Anthony Ujah for the winner, a fitting way for the home side to celebrate their tenth consecutive season in the Bundesliga.

Mainz sold some important players this summer including Abdou Diallo, Suat Serdar and Yoshinori Muto. Part of the estimated €50 million they generated was used fund the purchases of Moussa Niakhaté, Pierre Kunde and Jean-Philippe Mateta with Aarón Martín signed on loan.

All four recruits were in action today with Kunde replacing the injured Jean-Philippe Gbamin before half-time. Niakhaté took on the challenge of marking Mario Gomez and came out on top, left-back Martín growing into the game where he became more involved in the second half.

Mateta went close in the first half and his combination of height, speed and determination could be a real weapon this season. Kunde displayed a willingness to get stuck in and showed good vision and passing range, all four players providing promising debuts for their new club.

Many pundits wrote Mainz off before a ball had been kicked this season, using the quality of players sold as the main justification. The Zerofivers and Sandro Schwarz received very little love and were predicted by many to be relegated.

Mainz may still have an awful season and go down, but the reasons for that assumption don’t seem justified to me. Sporting director Rouven Schröder has done a fantastic job in a short space of time, buying young and talented players including Diallo and Gbamin whose market values rapidly increased.

The four recruits mentioned above could all be on a similar path. Another reason for such pessimism surrounding Mainz may be the perception of Sandro Schwarz, but I think he learned a great deal towards the end of last season and has more improvement to come.

Baku is a natural

Ridle Baku’s rise was one of the feel-good stories last season. Pulled off a bus in April to make his Bundesliga debut in desperate circumstances, the 20-year-old Mainz junior scored against Leipzig and followed up with a goal at Dortmund to help the Karnevalsverein steer clear of relegation. 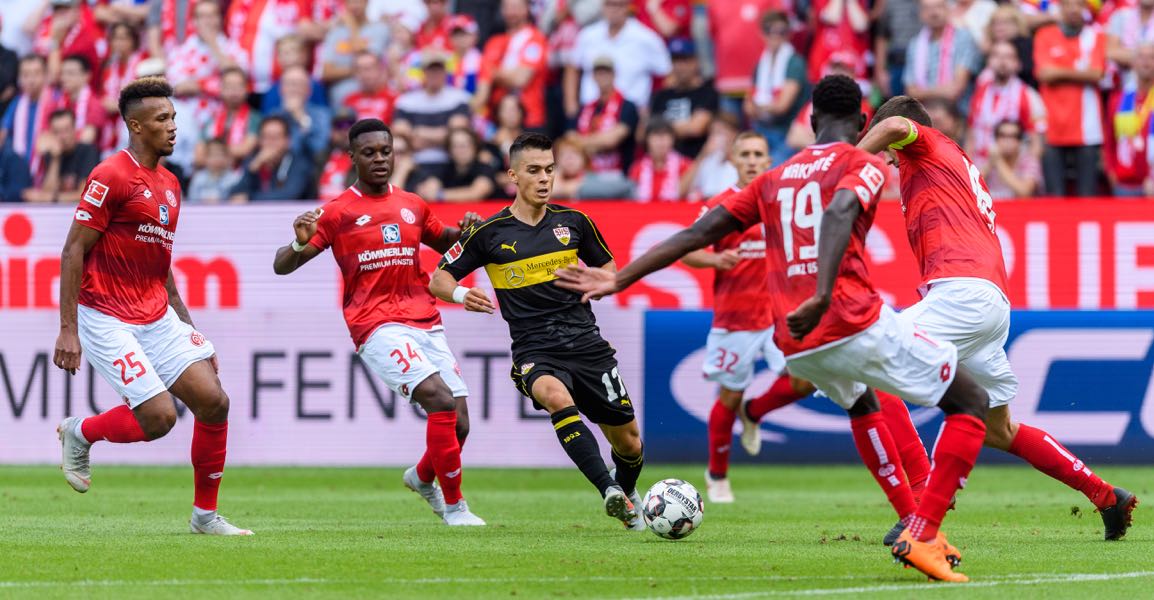 Erik Thommy of Stuttgart in action against Stefan Bell of Mainz (R) during the Bundesliga match between 1. FSV Mainz 05 and VfB Stuttgart at Opel Arena on August 26, 2018 in Mainz, Germany. (Photo by Alexander Scheuber/Bongarts/Getty Images)

His picture now adorning the exterior of the Opel Arena, Baku has quickly become a cult hero due to his ability and enthusiasm. With just a few top-flight games under his belt, Baku’s confident demeanour defies his age and inexperience.

Alongside 20-year-old Florian Müller who had a solid game in goal, it’s clear that sharp recruitment isn’t the only way to develop young and promising talent at Mainz.

Stuttgart performed well after Tayfun Korkut replaced Hannes Wolf in January, going on a run that secured 7thposition in the Bundesliga. It wasn’t pretty at times, built on solidity and a straight up 4-4-2 formation with two deep-lying central midfielders.

The only significant departure has been Daniel Ginczek with a host of players coming in including Marc Oliver Kempf, Pablo Maffeo, Borna Sosa, Daniel Didavi, Gonzalo Castro and Nicólas González. Michael Reschke appears to have recruited well, but does Korkut have enough tactical nous and ability to take Die Schwaben to the next level?

It’s a discussion for another day, but Korkut’s tactics are easy to predict and second season syndrome is a real danger. The pressure could quickly build for Korkut after Stuttgart offered little threat at the Opel Arena which followed the 2-0 defeat at Hansa Rostock in the DFB-Pokal.