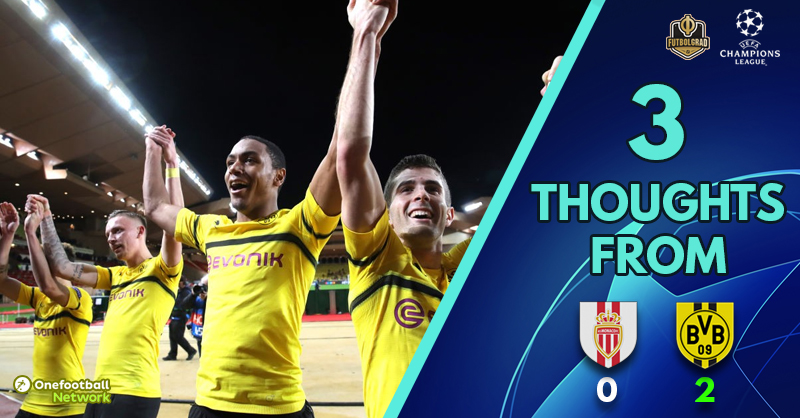 Monaco v Borussia Dortmund saw the German visitors needing all three points and hope that Brugge would beat Atlético to secure first place in the group. Dortmund got the job done in Monaco and thanks to Atlético’s 0-0 draw against Brugge finish first in Group A.

Lucien Favre rotated his side ahead of the encounter. In defence, Ömer Toprak was given a rare start furthermore Favre fielded Mahmoud Dahoud and Julian Weigl in central midfielder allowing Axel Witsel and Thomas Delaney some much-needed rest. Meanwhile, Raphaël Guerreiro, Christian Pulisic and Maximilian Philipp all gained some valuable playing time from the start as well.

Unlike it has been the case against Club Brugge, however, this time the rotation did not hurt Dortmund. Dortmund had 62% ball possession, dominated shots on goal (14 to 6), shots on target (4 to 0), shots inside the box (10 to 2) and managed to complete 89% of their 674 passes played against a Monaco side that never really got into the match.

The performance by the reserve players will give Lucien Favre some food for thought ahead of the Bundesliga match against Werder Bremen on Saturday. Christian Pulisic and Raphaël Guerreiro (more on him below) played their best games in a Dortmund uniform this season and with three Bundesliga games in just two weeks could provide some much-needed alternatives on Dortmund’s way to the Herbstmeisterschaft (half season championship).

Raphaël Guerreiro with an immense performance

Guerreiro, in particular, was impressive on Tuesday night.  The French-born Portuguese national team player had a fantastic night playing as a winger in the 4-2-3-1 formation scoring both goals to seal Dortmund’s victory.

The 24-year-old not only scored twice but he also managed to complete 95.1% of his 78 passes and completed two of his three crosses and won four out of his duels to cap off a great night. Defensively he was also of value making four key interceptions and one clearance. 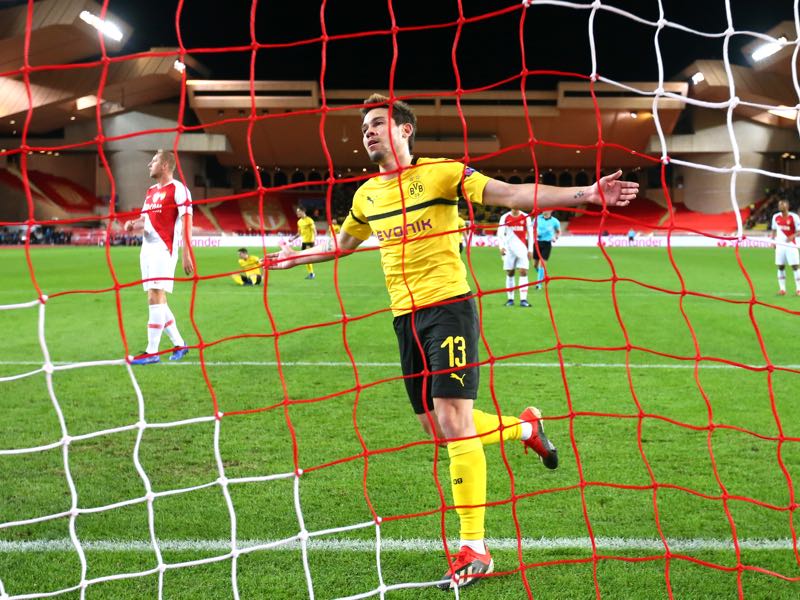 Overall, a well-rounded performance by a player, who many suspected could be on his way out in the medium-term. But Favre has now fielded Guerreiro twice as part of an attacking-trio behind a nominal forward, and while the winger was disappointing against Brugge two weeks ago he showed tonight that he could be a good option as a winger going forward, especially if Dortmund do opt to sell Christian Pulisic in the winter.

Dortmund seemed to have gambled their first place away two weeks ago when they were held to a 0-0 draw by Belgian side Club Brugge at the Westfalenstadion. Finishing second would have meant that Dortmund would have faced a group winner in the round of 16 and would have had to play the second leg away from home.

Brugge, however, managed to hold Atlético to a 0-0 draw at home and with Dortmund winning the head-to-head thanks to 4-0 victory at home over Atlético the Black and Yellows now finish first in the group. As a result, Dortmund will now avoid the likes of Barcelona, Paris Saint-Germain, Porto, Manchester City, Real Madrid in the next round. At the same time, a meeting with former head coach Jürgen Klopp could be in the cards as Liverpool finished second in their group after beating Napoli on Tuesday night.

Finishing first was the task ahead of this matchday and after Dortmund’s miserable 2017/18 Champions League campaign that first place finish has put the polish on an already excellent half season.