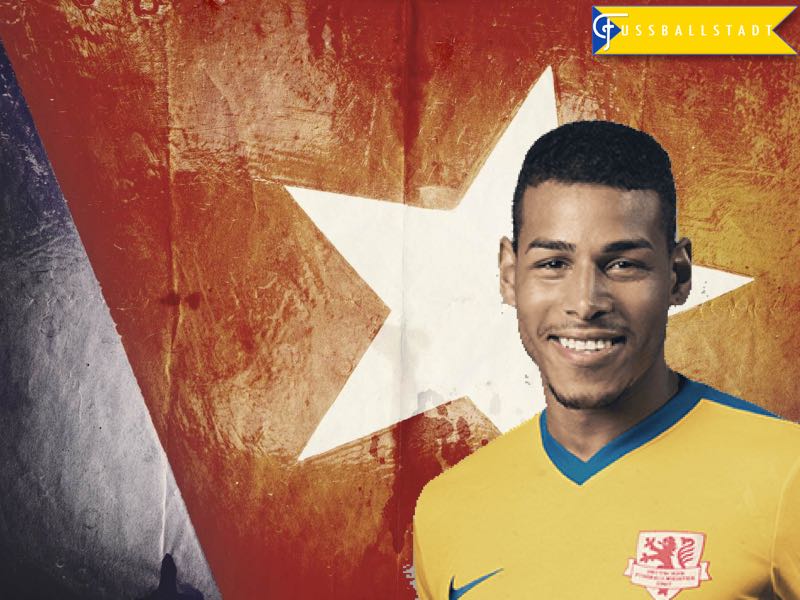 Eintracht Braunschweig’s Onel Hernández is one to watch in the second half of the Bundesliga 2 season. Born in Morón, Cuba, the 23-year-old left-winger, who has spent most of his life in Germany and has represented the country at the U-18 level, has been one of Braunschweig’s best players in the Hinrunde, and is a major reason why his club is leading the league ahead of favourites Hannover 96, and VfB Stuttgart.

Signed in the summer from rivals VfL Wolfsburg, where he played for the second team in the Regionalliga Nord (fourth division), this is Onel Hernández second attempt to establish himself in professional football.

A product of Arminia Bielefeld’s youth academy, Hernández first debuted in the Bundesliga 2 during the 2010-11 season under then head coach Christian Ziege. After playing ten games with the club, Bielefeld was relegated at the end of the season. He stayed on for one more year but, with his playing time diminished, he moved to Werder Bremen, where he was only used in the second squad, and then on to Wolfsburg.

Stuck in the Regionalliga Nord, and without much of a chance to make an impression in the first team, Onel Hernández landed a free transfer to Wolfsburg’s regional rivals Eintracht Braunschweig this summer. So far it appears to be a match made in heaven.

Located in what many Germans still call Zonenrandgebiet (on the border to the Zone, the term used to describe the former GDR) Braunschweig, or Brunswick in English, still suffers from the stigma of being located in the middle of nowhere. But German professional football, in many ways, reflects the German economy, which was built on the mittelständische Betriebe (medium sized companies) that are distributed around the country.

Recent World Football Index Gegenpressing – Bundesliga Podcasts have highlighted the excellent work of clubs that are located in medium size cities like Mainz, or Freiburg. Those teams, like the medium sized companies throughout the country, are the backbone of German football, as they are the breeding ground of tactical innovation, and talents that would normally not be given a chance at major clubs.

Eintracht Braunschweig, which won the championship in 1967, falls in the same category as the likes of Freiburg. The club was last part of the Bundesliga in 2013-14, but unlike most teams, Braunschweig did not fire their management, sport director Marc Arnold and head coach Torsten Lieberknecht, after the club was relegated.

Eintracht Braunschweig has a healthy dose of realism

There is, above all, a sense of realism at the club; the attitude is that Braunschweig will never become a major force in German football, and instead they have the vision to establish themselves within the top 25 of German football. As a result, the club must rely on tactical innovation, youth products, and uncovering hidden talent in order to compete with the big boys.

It is therefore no surprise that Braunschweig took a chance on Onel Hernández in the summer despite the fact that the German-Cuban winger had been unable to impress at Werder and Wolfsburg.

After a strong Hinrunde, however, Onel Hernández was ranked the fifth best winger in the prestigious kicker Rangliste des deutschen Fussballs. Scoring four goals, and three assists in 17 games Hernández has been identified as one of the Bundesliga 2 players, who could make the jump to the Bundesliga in the near future.

Bundesliga 2 will kick off the second half of the season on January 27, and Eintracht Braunschweig is set to travel to Würzburg where they will face the Kickers on matchday 18. Many expect that Braunschweig will not only challenge for a promotion spot this season, but could even challenge the big boys from Stuttgart and Hannover for the Meisterschaft (championship).

Die Löwen from Braunschweig do indeed mean business, as they recently defeated Werder Bremen in a test match. Onel Hernández was one of the best players on the field, and the German-Cuban winger scored the decisive goal after a wonderful solo in his club’s 2-1 victory over the Bundesliga side. Hernández asserted, “We have kicked off the new year with a great result, but more importantly: We want to underline our good performances from the first half of the season. ”

Braunschweig have now travelled to Mijas-Costa in Spain, where they will try to make fine adjustments to guarantee a successful conclusion to the season. Whether or not Braunschweig will conclude the season with a promotion spot remains to be seen, but one thing is certain, another strong half year by Hernández will likely result in the winger becoming a major transfer target for ambitious Bundesliga sides.