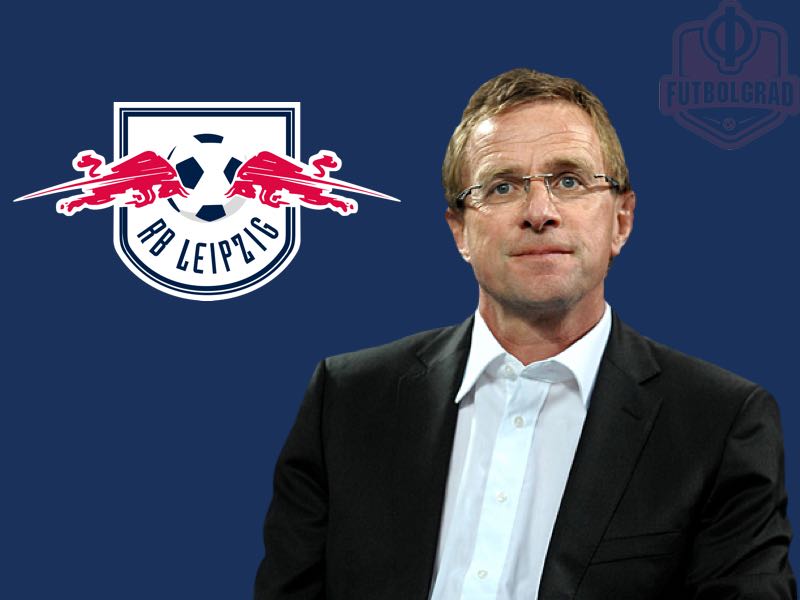 These days Ralf Rangnick is perhaps one of the most talked about sporting directors in the English media. The RB Leipzig strong man has surprised with his rather strong stance when it comes to hanging on to die Roten Bullen’s top players. Rangnick has declared that both Naby Keïta and Emil Forsberg will not be for sale this summer.

The sporting director has in fact reiterated this stance on several occasions and was once again the news on Wednesday when he declared that Forsberg and Keïta would not be sold this summer. Keïta, in particular, has been in the news as Liverpool FC have been very active in their pursuit of the player.

Believing various reports, Leipzig have turned down several bids for Keïta, and Rangnick remains adamant that he will not be released this summer. It is a strong statement given the amount of money that has been offered for Keïta, but Rangnick has even secured the backing of Red Bull owner Dietrich Mateschitz, who came out with a public statement that no Leipzig player will be sold this summer.

It is a rather curious situation as Ralf Rangnick appears to be in absolute control over the club, but also because it somewhat goes against the philosophy that was voiced by Rangnick and Red Bull when they began the football project in earnest in both Leipzig and Salzburg. Speaking to the Blizzard in 2015 about Red Bull Salzburg’s transfer policy Rangnick stated: “we sign players who are signing their first or second contracts so when they are ready for the next step, we have to let them go if you get the right offer. Our next players must be in the pipeline already.”

Many believed that this would also be the case at RB Leipzig and when the club first came into the league that was certainly the case. The idea behind Leipzig was to slowly build a club that one day could compete for the Champions League spots as well as win in Europe. Before last season both Rangnick and head coach Ralph Hasenhüttl stated that this would take at least three years.

Hence, it was expected that Leipzig would key players on the way to the top over the next three years. It was after all part of the philosophy to focus on players, who were young and could be developed for the next stage. Especially as Rangnick believes that only young players can play the high pressing demanding type of football that Red Bull requires from all its teams.

Therefore under normal circumstances, Keïta and Forsberg would have been gone after this season. But Leipzig’s season last year defied circumstances. The club stormed into the Bundesliga and became the first club in European history to reach the group stage of the UEFA Champions League after playing just one season in the top flight.

In other words, the project had taken a shortcut when the club reached the Champions League this season. The Futbolgrad Network was in Leipzig when the club secured a top three finish in the league, but despite the historical success, there was a sense of disappointment at the club.

Leipzig had just faced Bayern München and given away a 4-2 lead to lose the game 4-5. Following the match, there was a real sense of disappointment with both Hasenhüttl and Rangnick who was watching the press conference while sitting on a table in the corner of the pressroom.

That game against Bayern München is an important benchmark when it comes to understanding Leipzig’s transfer dealings this summer. Leipzig had played fantastic football for the most of the season but were bested twice by the Bavarians. The game in Munich on matchday 16 was in particular telling. Here the Rekordmeister dominated Leipzig and won the match 3-0.

It was a footballing lesson, and when Leipzig went up 3-1 and 4-2 at home against Bayern on matchday 33, the leadership of the club felt that they could now compete. But when Leipzig took off Marcel Sabitzer, Yussuf Poulsen and Timo Werner Leipzig lost track of the game. Bayern in the meantime were able to bring on Thomas Müller, Arturo Vidal and Douglas Costa. Strength in depth was the difference maker on that night.

Rangnick and Hasenhüttl, therefore, realised that to both challenge for the top of the table and be competitive in the league they had to increase their depth. Hence, sign players and keep the core group. In other words, Leipzig reaching the Champions League and two successive defeats to Bayern have meant that the club has changed its philosophy.

There is, however, another factor. Rangnick wants this project to be successful. Not just for Leipzig, or Red Bull, but also for himself.

A well-educated man Rangnick took a very different approach to reach the top of the Bundesliga. Playing for lower class teams throughout Germany it was not until Rangnick became coach of SSV Ulm 1846 that he was able to make a name for himself.

Playing with four at the back Ulm managed promotion to the Bundesliga 2 in 1998-99. The club then took that league by storm. This was a different time in German football. The national team was struggling and many teams still played with a libero. Rangnick was then invited to the ZDF Sportstudio (Germany’s equivalent to the Match of the Day) where he explained how to play with four at the back on a tactics board.

The all-powerful VfB Stuttgart President Gerhard Mayer-Vorfelder belonged to the first camp and quickly moved to appoint Rangnick to become the new head coach starting with the 1999-00 season. The deal was announced during the winter break of the 1998-00 season, and as a result, Ulm’s performance crashed, and Rangnick resigned in other to take the pressure of the club—Ulm was later promoted to the Bundesliga.

Rangnick’s tactics, however, did not work at Stuttgart and he was fired in February 2001. He then coached Hannover 96, Schalke 04 and then moved to Hoffenheim to the third division. At Hoffenheim, Rangnick was given the complete freedom to build a club to his liking, and as a result, he would turn a third division club into a Bundesliga side.

Signing young players who could be developed Hoffenheim briefly managed to take the Bundesliga by storm during the 2008-09 season. In the end, the club, however, slipped down the standings and finished in seventh place. The following season Hoffenheim finished 11th. The club then started well in the 2010-11 season, but when Hoffenheim owner Dietmar Hopp sold midfielder Luiz Gustavo to Bayern Rangnick decided to step down—another critical moment in Rangnick’s story.

He then joined Schalke but quickly left the club as a result of a burnout syndrome. After taking a year off, he then joined Red Bull to become the sporting director of Red Bull Salzburg and was also put in charge of the global football development of the company.

As part of that position, he was also brought in charge of getting RB Leipzig. Leipzig had struggled at this point being stuck in the fourth division Regionalliga. Rangnick quickly fired head coach Peter Pacult and replaced him with Alexander Zorninger moved to make the squad younger. Within two years RB Leipzig had reached the Bundesliga 2. The club somewhat struggled in Germany’s second division, however, and as a result, Zorninger was fired and when Rangnick failed to land head coach Ralph Hasenhüttl from Ingolstadt took over the coaching position himself.

He then guided the club to the Bundesliga. Once there he then completed the transfer of Hasenhüttl showing a determination by getting the only man he thought fitted the RB Leipzig project.

Rangnick – A Man of Principles

Leipzig’s rise through the ranks is another important episode. It showed that Rangnick is a man who is determined to hold out when it comes to securing the right people for his club. As we now know Rangnick was bang on when it came to identifying Hasenhüttl as the key to bring the club forward.

RB Leipzig play a brand of football that we have not seen since Hoffenheim was first promoted. But with one key difference, the club was able to sustain Hoffenheim’s success of an entire season. The result is that for the first time in history a Red Bull branded club has reached the UEFA Champions League. Something that was always identified as Red Bull owner Didi Mateschitz’s biggest dream. 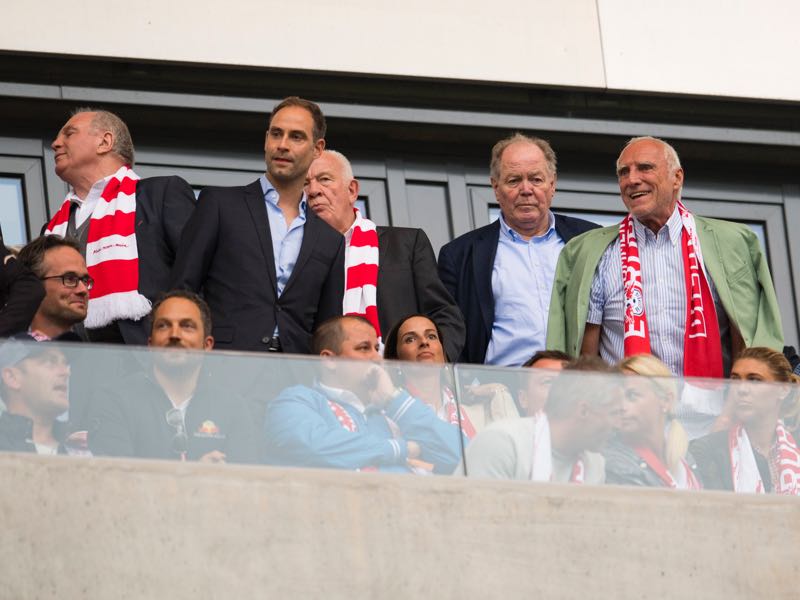 Mateschitz (on the very right at the game against Bayern) has 100% backed sporting director Ralf Rangnick. (ROBERT MICHAEL/AFP/Getty Images)

Mateschitz, however, wants his brands to not only qualify for the biggest competitions; he also wants them to win those matches. This is completely echoed by Rangnick who for the first time has been given a vehicle to both test out his football theories and also win trophies. It would show that he is not just a football professor who can lead clubs from nothing to the Bundesliga, but that his theories can also win at the biggest stage.

It is for that reason that Rangnick has been steadfast when it comes to hanging on to his best players—even if it somewhat defies his strategy to a certain extend. He wants to see what this group of young players, which has been nicely supplemented by the talent this summer, can do at the Champions League level.

Therefore with the full backing of the owner Rangnick was able to overrule everyone else at the club thus far. There is, of course, a danger in those principles. Rangnick’s statements leave no room for manoeuvres and as we have seen in the past can lead to a sudden departure from a project if things do not go his way, which would explain why Mateschitz came out and strongly supported his stance.