Titel candidate RB Leipzig hosted relegation candidate Werder Bremen. And the Red Bulls should have taken an early lead but Dani Olmo missed the open net from just a few yards out (6′). From there, an open game developed in which one could not tell the title candidate from the team fighting relegation. Often the difference is in small margins, most visible in the 18th minute when Werder failed to defend a freekick allowing Lucas Klostermann to tap home the ball from short-distance.  Leipzig were the better team but needed a second set-piece to double the score. This time it was Patrik Schick, who scored with a header after a Leipzig corner (40′).

The second half was just two minutes old when Konrad Laimer picked out Nordi Mukiele’s run, the defender rushed in the box and beat goalkeeper Jiri Pavlenka with a low drive. That goal settled it for RB Leipzig. Julian Nagelsmann, with the clash against Tottenham in mind, now started to rotate his side and took key players like Konrad Laimer off the pitch. But even with squad players on, RB Leipzig never struggled to contain Werder. 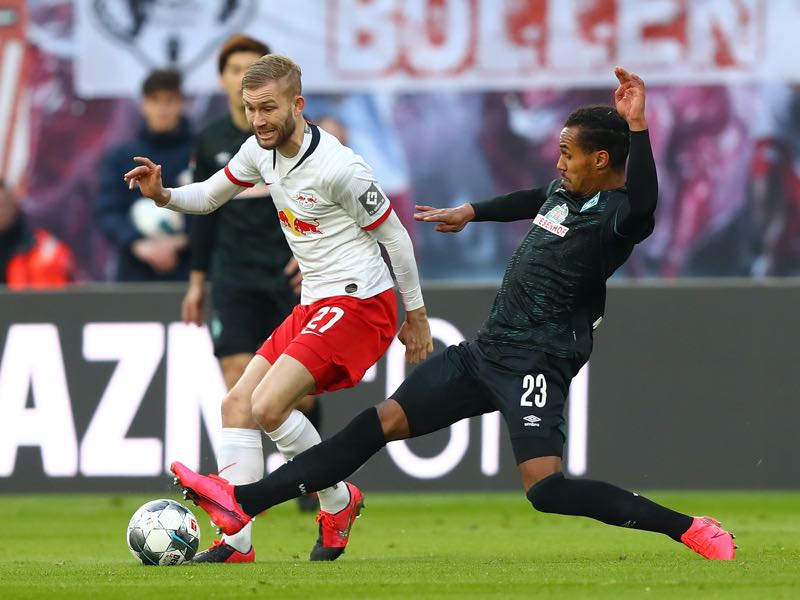 Konrad Laimer had an excellent game. Playing in central midfield, the 22-year-old Laimer dictated Leipzig’s game. Laimer was both the most active player when it came to winning the ball but also when it came to distribution. His assist ahead of Mukiele’s goal was exemplary for his fantastic day at the office.

Ever since the Liverpool rumors, Timo Werner has been struggling for goals a bit. Thankfully, for Leipzig the Red Bulls have an excellent plan B. The striker scored with a thundering header in the first half. With Leipzig possibly selling Werner, Schick’s future now seems to be firmly in Leipzig.

Angeliño has been a great addition to RB Leipzig. The Manchester City loanee created plenty of tempo on the left. Also with Angeliño on the pitch the transition game is less predictable as Leipzig can now turn over the ball at several areas of the pitch.

RB Leipzig underline a strong performance against Bayern Munich with a fantastic win over Werder Bremen. The Red Bulls will be first for at least 24 hours. The pressure is now on Bayern to answer the result tomorrow against 1.FC Köln.

The pressure is also real for Werder. The Green and Whites finished the game in joint last place with Fortuna Düsseldorf. Under head coach, Florian Kohfeldt have a good playing idea but generally lacks a plan B for difficult situations.

Loading...
Newer Post
Eastern European Clubs and their Performances in the Champions and Europa Leagues
Older Post
What is the future for Ole Gunnar Solskjaer as a Manchester United coach?