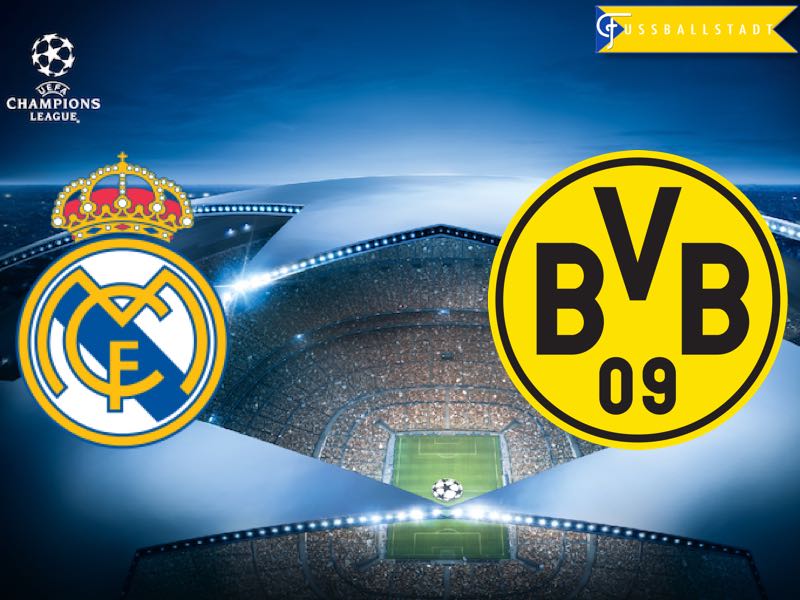 It was a lively beginning between the two giants of European football with Andre Schürrle having the first clear cut chance in the early goings, his shot from 20 yards went over the goal, however. Shortly after Cristiano Ronaldo and James Rodriguez played a nice give and go in the box, but Roman Weidenfeller came up big to stop the close range shot from James. Real Madrid C.F. would eventually score, however, as Dani Carvajal low cross found Karim Benzema, who tapped the ball past Weidendfeller. Dortmund had chances to equalize the score, but Christian Pulisic had a close range attempt stopped by Keylor Navas, who would also do well to stop a wonderful freekick by Schürrle.

Dortmund started the second match on the attack, and Gonzalo Castro could have equalized when he received a low cross from Ousmane Dembele, but he could not get a shot away. But instead Benzema would double the lead for Real with a short-range header. Dortmund, however, did not give up, and Pierre-Emerick Aubameyang pulled a goal back after a great ball from Julian Weigl found Marcel Schmelzer in the box, who passed the ball to Aubameyang, and he had no problem finishing the play. Both teams had chances to run up the score-line, and in the end it was Dortmund, who would get the goal after Aubameyang found Marco Reus at the centre of the box, and the attacking forward made no mistake to equalize the game.

With Bayer Leverkusen, and Bayern München finishing second in their respective groups Borussia Dortmund can only face Manchester City, Benfica, Porto, Sevilla, and Paris Saint-Germain. The draw will take place on Monday December 12.

Real Madrid vs Borussia Dortmund -Man of the Match

Pierre-Emerick Aubameyang scored once, and assisted Marco Reus’ goal that made it 2-2. Aubameyang was also a constant threat to Real’s defence, and was a major part of what was a historic night for Borussia Dortmund.

Borussia Dortmund have scored 21 goals in the group stage of the UEFA Champions League this season, which is a new record. The previous record was set by Barcelona just last night, as the Spanish club has finished the group stage with 20 goals.