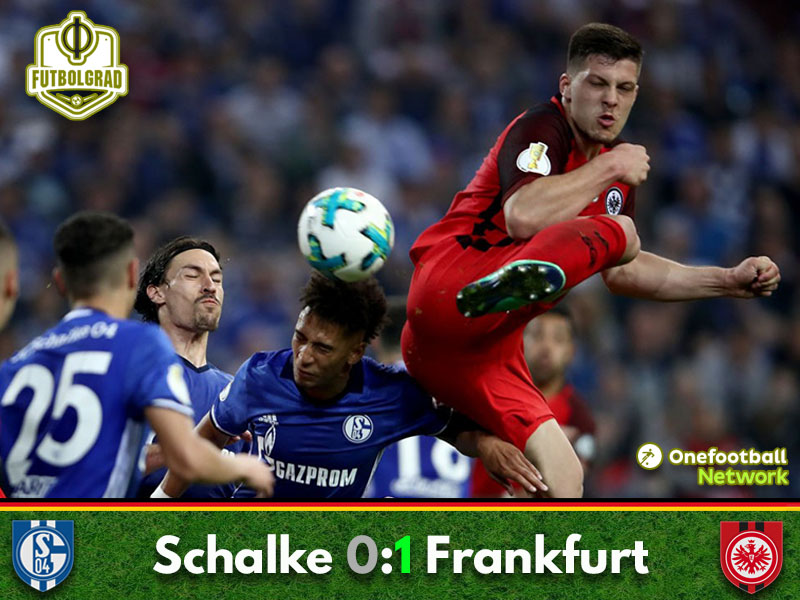 In a stark contrast to last night’s semi-final fixture, Schalke v Frankfurt was a bad-tempered affair. Frankfurt eventually edging past their hosts to set up Pokal Finale that will be dominated by one man.

A half littered with strong challenges and ferocious battles summed up the first 45 minutes inside the Veltins-Arena. Opportunities came, but ultimately they went – neither side able to capitalise on any half chance that presented itself.

Lukas Hradecky became the busier of the two goalkeepers once the tempers briefly simmered. The 28-year-old called into action just after the half hour mark, a diverted shot had the Finland international routed to the spot – he will have been relieved to see the ball just about creep past his far post.

From the resulting corner Schalke’s danger man – Guido Burgstaller – forced the Frankfurt ‘keeper into a wonderful reactionary save. Hradecky tipping the Austrian’s header over the bar at close range when it looked destined for back of the net.

Kevin-Prince Boateng was replaced by Mijat Gacinovic shortly before half time – the Frankfurt forward leaving the field after a clash with Daniel Caligiuri. It had been the story of the half – individual battles interjected with the occasional glimpse of goal.

The second half began as the first ended – both sides wary of committing men forward in search an opener.

Schalke allowed their visitors time on the ball as the Königsblau waited patiently for a counter-attacking option. Frankfurt alive to the plan invited their hosts to push out, it became a battle of wills – a Pokal stalemate.

Foul followed foul in a game perpetuated by quiet words when a yellow card may have forced a different route. Amine Harit picked up a first half caution, he should have been followed into the book by at least three others as the fixture briefly sparked into life.

Schalke’s Ruhr derby victory was powered by a strong performance from Yevhen Konoplyanka – On 52 minutes Domenico Tedesco looked to the Ukrainian to inject some much-needed quality into a what was becoming a dull fixture.

Saturday’s standout player almost delivered instantly – the Schalke midfielder forcing Hradecky into his second quick reaction save of the evening, it was close for the hosts but not close enough.

With their third corner of the night, Frankfurt found the opening goal. Jonathan de Guzman eventually delivered something of real quality – Luka Jovic flicking the ball beyond Fahrmann into the far corner to send the travelling Eagles fans wild.

Just as die Adler seemed to have control of the fixture Gelson Fernandes’ rush of blood changed it in an instant. The Frankfurt substitute on the pitch for three minutes before seeing red. A consultation of VAR turning the Swiss midfielder’s yellow into a straight dismissal – the visitors down to 10 men with 10 minutes to play.

Schalke threw bodies forward but they couldn’t find an answer to Jovic’s goal. Frankfurt clinging on to reach their second Pokal Finale in two years.

With his ninth goal of the season the Serbian forward sent the Eagles to Berlin. Asked to feed off scraps all evening, he remained astute and focused enough to take the only clear opportunity presented to him. 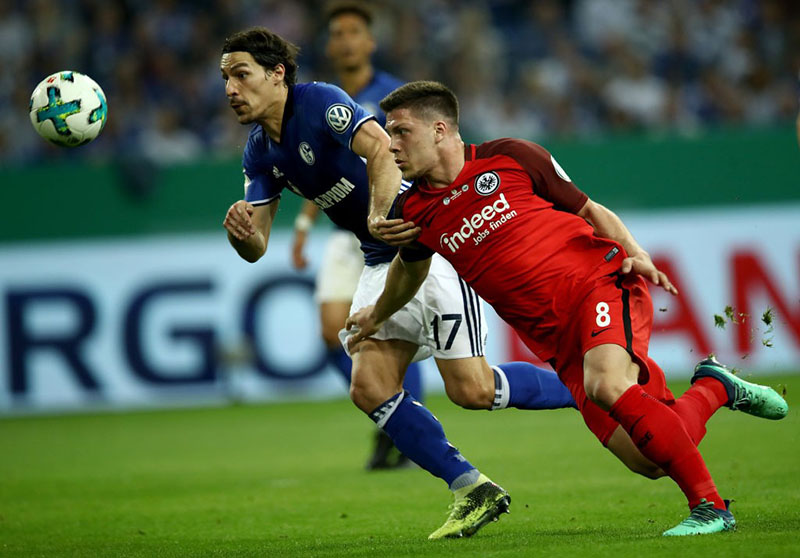 Luka Jović bided his time to slot away the only goal in a close encounter. (Photo by Maja Hitij/Bongarts/Getty Images)

In an ill-tempered game a red card became an inevitability. The tempo was set early on, it should have been shut down by the referee. Leon Goretzka escaped a yellow card after several warnings and it was the Schalke midfielder who was involved in the Frankfurt dismissal.

Even as the game went into added time the referee allowed the Königsblau to show a side of frustration that should have been acted upon.