A brace by Erling Haaland and goals from Jadon Sancho and Raphaël Guerreiro were enough to sink Dortmund’s neighbors Schalke in Saturday’s Revierderby, it is a result that almost certainly confirms no way back for the Gelsenkirchen side now with 2. Bundesliga beckoning.

With both clubs suffering a loss in form and fortune, the 98th Revierderby had more at stake than just local pride. Schalke locked into the league’s bottom place, their 2020/21 remains the second-worst campaign in Bundesliga history.

Prior to today Dortmund had won only one of their last six league games and a quest to reach the UEFA Champions League next season seemed genuinely under threat due to their rollercoaster form, the Schwarzgelben could ill afford any more slipups–especially to their neighbors and fiercest rivals.

As the situation was so tense for both teams, it was natural that the fixture would begin with a period of nervousness, and so the pattern developed for the opening 15 minutes. However; uncertainty was replaced by ambition as both Schalke and Dortmund looked to test each other’s defences.

The hosts were struck by two bouts of bad luck, firstly Shkodran Mustafi was taken out of the starting XI moments before kick-off, and then on 32 minutes, Ralf Fährmann was replaced by Michael Langer after the goalkeeper looked to have either pulled a muscle in his stomach or damaged a rib.

Control in the midfield oscillated, but neither side could find any sort of real quality in the final third to test the goalkeepers. As the half edged towards its conclusion, the level scoreline was a fair representation.

But with two minutes remaining breakthrough was achieved, and it came for Dortmund. Jadon Sancho’s pressing forced Benjamin Stambouli to take a heavy touch, his mistake was pounced on by Mateu Morey who fed the ball back to the Englishman, the finish was simple.

Deflated, the Königsblauen then had to witness the absolute world-class talent that is Erling Haaland. Three minutes after Sancho’s opener, the Norweigen seemed to defy gravity by floating in the air, the way he dispatched his volley into Langer’s far corner was unstoppable. Dortmund had given their neighbors a double sucker-punch just as the half ended.

Christian Gross tried to freshen his side up, Omar Mascarell came on to add shape and vision to the midfield area, as did Alessandro Schöpf–William and Nassim Boujellab pulled at half time.

Buoyed by a sensational ending to the first 45 minutes, Dortmund immediately went looking for a game-defining third, and it allowed Schalke to exploit the empty space. A mixture of the post and Marvin Hitz stopped a Schalke revival on 51 minutes, Suat Serdar denied an all but certain goal–the story of the host’s season in one phase of play.

It went from bad to worse for the Royal Blues, just as they looked to be getting back into the fixture, Dortmund struck again. Raphaël Guerreiro’s simple pass into the net on the hour mark signaled no way back for the relegation favorites. A fourth goal was the icing on the cake for Dortmund–Haaland with his 43rd goal in 43 games for the club ended any sort of fightback with 11 minutes remaining. 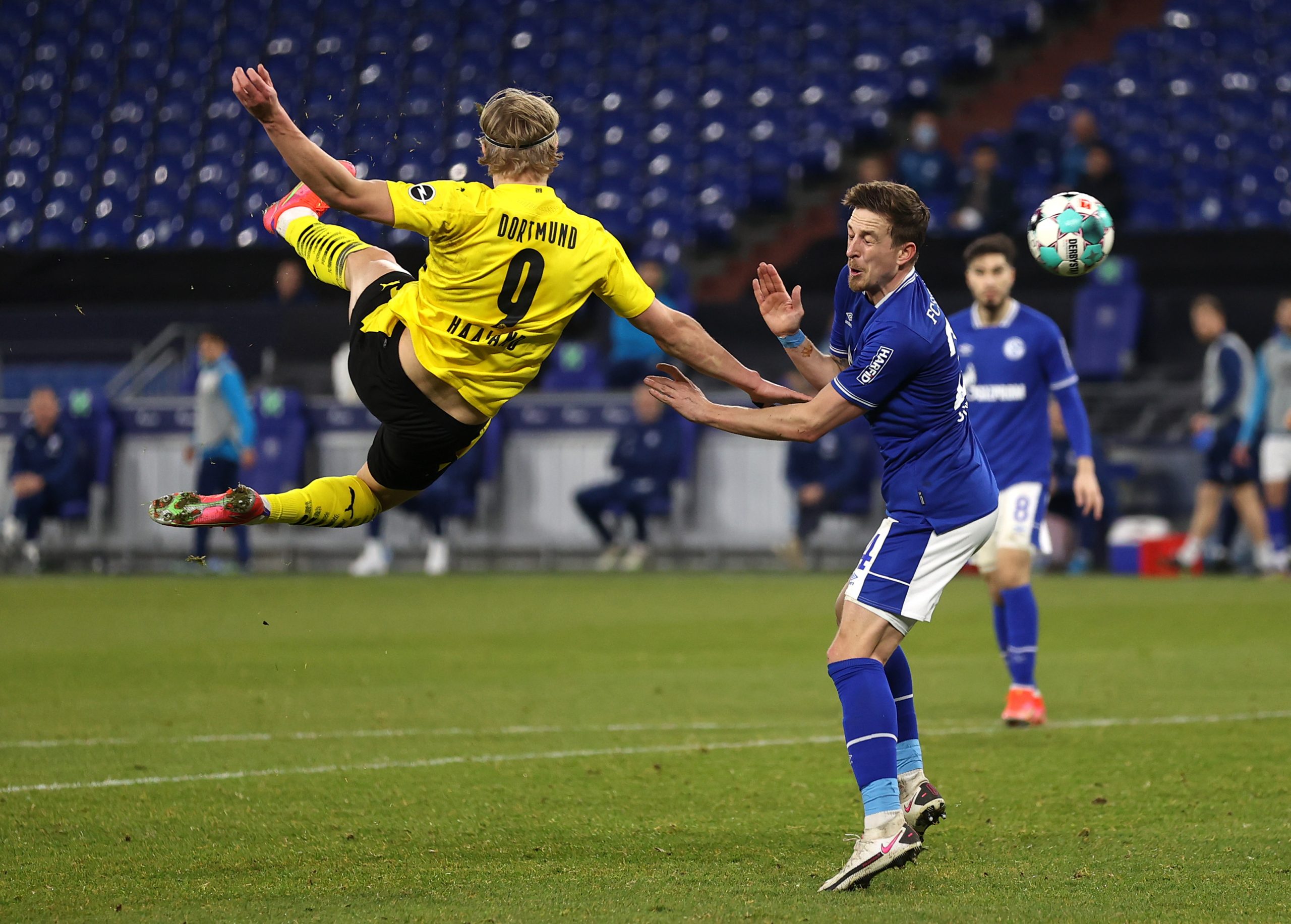 Dortmund’s second goal was a work of art, Haaland hung in the air to volley home–he is quickly becoming the hottest talent on the global stage. That talent is matched by his work-rate, he is every inch a classic number nine. A tap in for his brace, but another illustration of the forward knowing where to be at exactly the right time. The Norwegian’s 42nd and 43rd goals for the Black and Yellows in his 43rd game, scoring on average with every fourth shot–simply sensational.

The hosts lacked any real firepower in the final third, but the chances still came–mostly thanks to Harit. Operating on the left flank he was a constant danger whenever Schalke did muster an attack, but as for the last 18 months–the Königsblauen just can’t seem to score when it looks a certainty.

Netting the opener, the Englishman made Bundesliga history. At 20 he becomes the youngest player ever to reach the mark of 35 league goals, it brought his campaign total to 10 across 28 games in all competitions, the assist to Haaland for Dortmund’s second his 15th this season. Not bad for a player said to be out of form by some.

Subs: 61′ Bellingham for Brandt, 80′ Reyna for Dahoud, Reinier for Reus, 83‘ Meunier for Morey, Moukoko for Delaney