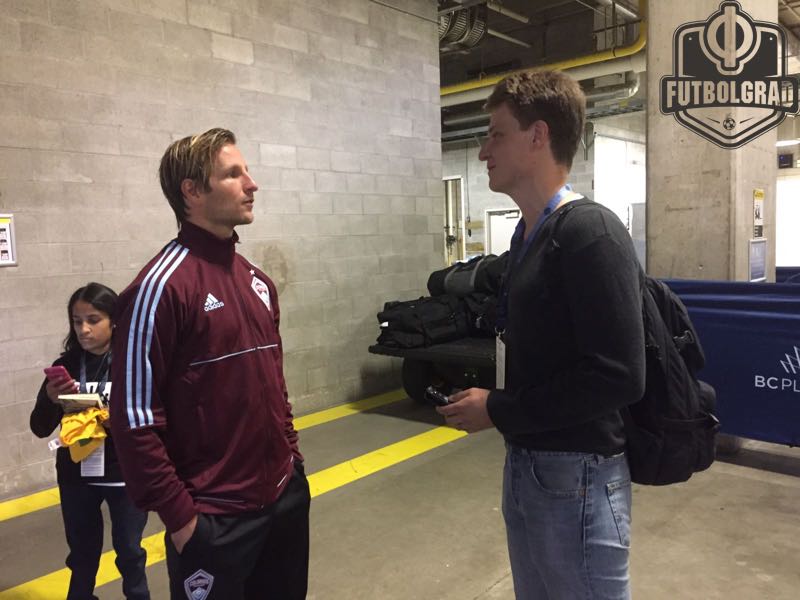 Stefan Aigner – The Big Interview With the New Colorado Star

Stefan Aigner, who meets us wearing the burgundy red tracksuit of his new club, mirrors this attitude. Asked whether to conduct this interview in German or English Stefan Aigner responds that he would prefer German. He then smiles when I tell him that I am from Munich and laughs when I say that I support 1860. What follows is an interesting conversation about his return to 1860 and the transition to the Colorado Rapids to Major League Soccer.

Stefan Aigner was a Symbol of Hope for 1860 Supporters

1860 fans, of course, met the return to 1860 München last season with a lot of hope. The club’s investor Hasan Ismaik ended years of little spending and invested in new players. The signature of fan favourite Stefan Aigner from Eintracht Frankfurt was understood to be a gift to the fans. Aigner in the meantime had ambitions that he could return to the Bundesliga with his favourite club: “I had lots of hopes. I wanted a new challenge. I wanted to come back and get promoted. Secretly that was our goal. We also brought in some key players like Ivica Olić, who had the experience to play in the Bundesliga.”

The problem, of course, was that the club never really found its form. Midway through the Hinrunde sporting director Thomas Eichin and head coach Kostas Runjaic were fired. Aigner explains: “We just couldn’t find our form. On a personal level I had a great start, but then had problems with injuries, and just couldn’t find the form that I expected from myself. The rest that went down at the club is public knowledge.”

The coaching change to Vitor Pereira did little to change the fate of 1860 München. Good results at the beginning of the Rückrunde were quickly squashed when the club fell into a trot of poor performances. The club kept falling deeper and deeper and by the time the relegation playoffs kicked off the team was a collective of individuals and not a unit any longer. For Aigner, this was one of the most difficult periods of his career.

Things were then made even worse when investor Ismaik refused to finance the club’s Liga 3 licence. As a result, 1860 had to restart in the Regionalliga Bayern (fourth division). Too deep of a drop for Aigner: “I thought about staying at the club. First I went on holiday that was the most important thing for me. I needed time for my head the season was tough for me mentally. There was a lot of pressure on me at the beginning of the season. I came back, and huge expectations were surrounding my return to the club, and then you get relegated. That was brutal, very hard. Hence, I went on holiday I tried to relax, which was difficult. At the same time, my thoughts were ‘now you have been relegated I should try to help the team to get back up [to Bundesliga 2].’”

The lack of a Liga 3 licence changed then changed everything. “When the news about the lack of Liga 3 licence came in the decision was clear for me. I am a 1860 fan. Everyone knows that. But this is my job. I have a family and a kid.”

Aigner does, however, still follow what is happening at the club. Following all the latest on the kicker app and asked about last Saturday’s result he answers: “It is looking good for the club.” Asked whether he would ever go back though he quickly says: “no that is over.”

Reports have suggested that several Bundesliga sides were interested in signing the winger. But Aigner was looking towards a new experience. “I wanted something completely new. First I needed some time to switch off from football. Usually, I just need a couple of weeks until I miss football. This time it took a bit longer like seven to eight weeks. But then I got this offer from America. And then I flew over here because I wanted to take a look.”

Stefan Aigner liked what he saw. Speaking to the Futbolgrad Network, one gets, in fact, a real sense that he loves his experience over in the North America. When we first meet I am asked several questions about live in North America and how long it took me to adjust. “I knew that if I move to the USA that will be the end of my European career. That is just how it is. I am now 30. But now in retro perspective, it was the best decision I could have made. There is not the same pressure here as it was in the Bundesliga or at 1860. First and foremost it is about having fun, which is nice and I am enjoying it. I am happy that I have done it.”

Aigner: “The Travel is Different Over Here.”

One of the biggest differences between playing in Europe and Major League Soccer is of course travel. The flight from Denver to Vancouver, for example, takes about three hours and MLS teams are not allowed to fly charter. Instead, teams are using regular passenger planes. Aigner does not seem to mind this a bit, however: “It is different [than in Europe]. You spent a lot of time flying and are often gone for days. But there is a positive aspect to this. You get to see a lot of the world. Other people spent a lot of money to see new cities. This is of course not a sightseeing trip, but we get to see new cities and I want to take it all in.”

While the flying is tough players at least get some time to see the cities that they visit. “Yes, we have time. It isn’t as strict as in Germany where you have to spend eight, nine hours in a hotel. We are not locked into the hotel when we have an evening game here. We can go out and take a look. It isn’t sightseeing. But I have time to take a look to see the city it is more relaxed over here.”

On the pitch, the results have not been great for Colorado, but Aigner at least is feeling that he is slowly gaining the level necessary to compete again. One of the toughest things, of course, has been playing a full season in the Bundesliga and then going straight to MLS, which is now in midseason. “I feel good. It has taken some time, and I haven’t played, or trained, in three months. I, of course, kept myself fit and went for runs in Munich. It isn’t the same though than being fully in a team practice. I didn’t want to make the same mistake as I did when I was at 1860 that I would come back to early. There I returned from a knee injury after just two weeks, which didn’t do me, or the team, any favours.” 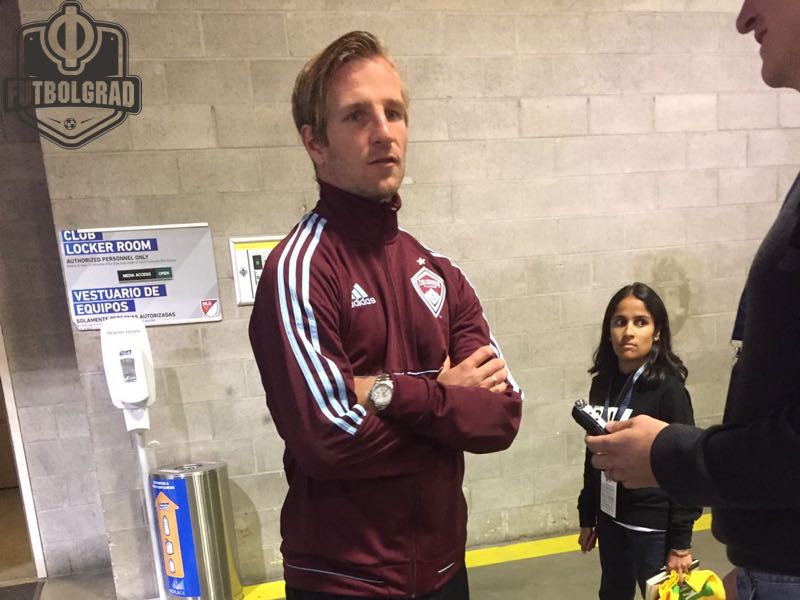 Colorado Rapids play at altitude, which makes it difficult for new signings to make the transition right away. This was no different for Aigner who started the first four matches of his MLS career on the bench. “Colorado’s elevation is 1600 metres, which meant double the pressure when it came to adjusting.”

While it has been a long adjustment and the results have not been great he feels that he is now ready to compete and that the results are not the most important thing for himself. “I feel great, and I enjoy it despite losing today to Vancouver Whitecaps. It isn’t the same as in the Bundesliga where defeat is the end of the world. Here they have a positive mentality, which makes it more fun.”

Fun is one of the keywords during our conversation. Aigner over and over highlights that he wants to enjoy football again. To play without the pressure of being the club’s darling and without all the cameras of a city directed on him as it was the case in Munich. As for his ambitions with Colorado, he remains coy. “I don’t know how they are planning. I want to play as much as possible. We won’t reach the playoffs. We want to play and have fun.”

While fun is the keyword, Aigner believes that Major League Soccer is a competitive league. Responding to Bastian Schweinsteiger’s comments in die Sueddeutche about the level of Major League Soccer Aigners says: “That is hard to tell. I feel that many teams are very strong at home and then weak on the road. There are exceptions. I recently saw Portland play and they are at least on the level of a top Bundesliga 2 side, perhaps a bottom Bundesliga side. I think that there is a lot of quality in this league especially up front and I believe the league is growing quickly.

Aigner is also quick to point out that MLS is a growing league and that it deserves more credit than people give it: “It isn’t that much worse than the quality I am used to after all there are some world stars in this league, and yes I realise they are older, but they have still won Champions League titles and World Championships. The league can’t be bad if the likes of Pirlo and David Villa play here it shows that there is quality.”

Leaving the Futbolgrad Network, he smiles and says “I will have fun here.” Those who remember the distraught picture of Stefan Aigner next to the 1860 München mascot following the relegation playoff defeat to Jahn Regensburg will be happy to hear that Aigner has regained his love for the game. After all, that is all that matters in football.