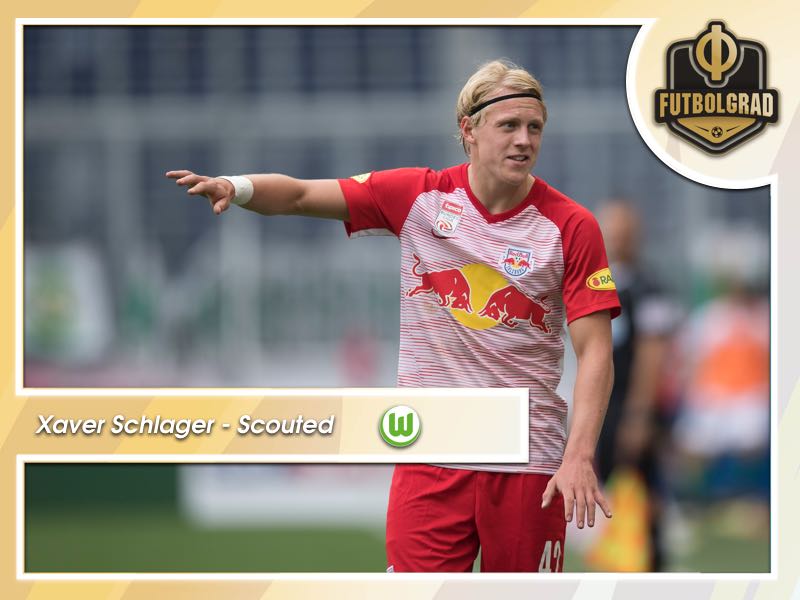 There was an expectation of sorts that Austrian midfielder Xaver Schlager would follow the common path from RB Salzburg to RB Leipzig this summer. After all, as a high pressing midfielder he would have been a perfect fit for Leipzig’s football philosophy.

From the getgo, however, Xaver Schlager was looking for a different path. Hence, his primary options for a move from Austria to Germany was Borussia Mönchengladbach, now coached by his former head coach Marc Rose, and VfL Wolfsburg where Austrian Oliver Glasner took charge this summer.

In the end, it was Wolfsburg that won the race to sign the 21-year-old Austrian national team player. “The time for change had come,” Schlager said at the club’s official presentation. “Wolfsburg offers both a professional but also familiar atmosphere and I think I can develop here the best. … It is a new challenge, that I did not want to refuse as it is both attractive and exciting,” Schlager added.

“[Xaver Schlager] is a young ambitious player, who wants to make the next step in his career,” sporting director Marcel Schäfer said. “He already has a lot of international experience despite his young age and his qualities are a perfect fit for Wolfsburg.”

It is that sort of experience Wolfsburg were looking for when they signed the 21-year-old. After all, Wolfsburg qualified for the group stage of next season’s Europa League and sponsored by Volkswagen have ambitions to be a significant force in that competition.

For Glasner, however, signing Schlager was not just about experience. “[Xaver Schlager] is a typical box-to-box player and very ambitious,” former Werder Bremen midfielder Zlatan Junuzovic told kicker. “He fights for every ball and works hard until the last minute. On top of that he is technically gifted.” 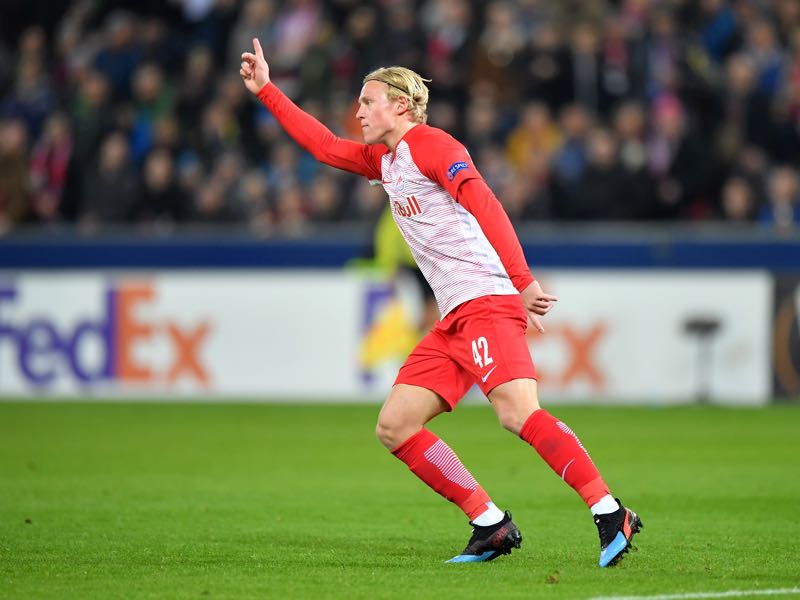 Xaver Schlager of RB Salzburg celebrates after scoring his team’s first goal during the UEFA Europa League Round of 32 Second Leg match between RB Salzburg and Club Brugge at Red Bull Arena on February 21, 2019 in Salzburg, Austria. (Photo by Sebastian Widmann/Bongarts/Getty Images )

Hence, Schlager is a perfect player for Glasner’s plan to play high pressing in the Bundesliga. In fact, the former LASK head coach plays a similar system to that used by the Red Bull clubs and, as a result, Schlager should find it easy to make the transition to Wolfsburg.

Playing as a central midfielder, therefore, Xaver Schlager has the potential to become a key player in Wolfsburg’s midfield. But the Austrian will have to fight for his space in a competitive central midfield that also includes Maximilian Arnold, Elvis Rexhbecaj and Yannick Gerhardt.

“Let us let him arrive first,” CEO of sport Jörg Schmadtke said to kicker on Thursday. “Once he has established himself, we will have an ambitious player, likes to run and is tactically strong. But when comparing him to the rest of the Wolfsburg side what are his biggest strengths?

Before we dive into the numbers, two things need to keep in mind. First, Schlager played in the less competitive Austrian Bundesliga last season, second that gap, however, is offset a bit by the fact that Europa League matches will be factored into the stats presented.

Schlager by the numbers

When it comes to players moving the ball Xaver Schlager does well in comparison to the players in the side already. No Wolfsburg player has played more passes per 90 minutes than Schlager’s 42.55 — second on the list is Josuha Guilavogui with 42.33 passes per 90 minutes. Guilavogui is also the only player that had a higher pass completion rate (86.27%) than Schlager (82.44%).

Although his former teammate Junuzovic pointed out that Schlager needs to improve his goalscoring touch the 21-year-old was the most dangerous midfielder among all midfielders. The playmaker scored nine goals in all competitions, significantly more than his xG of 6.23.

Schlager also ranks top with 75.57% completed passes into the final third and 1.47 thru passes played per 90 minutes. Finally, what does stand out that Schlager does not rank well in defensive positioning in comparison to any other central midfielder in Wolfsburg’s squad.

That said the Austrian was signed to help Wolfsburg with a high press. Hence, Glasner will likely look for creativity and attacking prowess from his compatriot, something that should suit Schlager very well.