For weeks the Lions have now struggled to find points and goals. Furthermore, when the Lions do manage to score goals, they have been leaky like it has been the case on matchday 36 when they conceded five goals against FSV Zwickau.

A definite lack of balance and a squad not aware of present dangers seem to be the main problems. The Lions were not part of the relegation battle for most of the season and seemed to have switched off once fourth place, and automatic DFB Pokal qualification was out of reach.

Hence, can the Lions turn the switch one last time and collect the necessary win in the last two games to be on the save side? “It is an extreme situation, we are at a trough – and it is difficult to get out of it,” sporting director Günther Gorenzel said this week. “We have to take on every tackle like it is the last one,” he added.

Meanwhile, Fortuna Köln have been part of the relegation battle for most of this season. The 1-1 draw against Meppen last week “was the most difficult moment in my career,” head coach Oliver Zapel said this week. With that result, Fortuna are now in 19th spot and one point away from safety.

Fortuna have to win in Munich to stay alive heading into the final matchday of the season. In general, the club has good memories when it comes to the Grünwalder Stadion.

It was here that Fortuna returned to professional football beating Bayern II in the relegation playoffs in 2014. However, Köln will be without their best player Hamdi Dahmani; he is out with a muscular problem. The club’s top scorer and the captain is a big part in Fortuna’s attacking game and will leave a big hole to fill.

Will history repeat itself? Or will the Lions make the decisive step and finally secure safety? It will be a tight game, and in the end, 1860 fans will likely be happy to walk away with one point.

1860 Munich vs Fortuna Köln – Players to look out for:

Whenever it gets emotional Sascha Mölders is the player to count on. The burly striker has shown his age this season and might not be the top player he once was for the Lions. But he should not be counted out either and is usually there when it matters. On Saturday against Köln, it will matter, and Mölders will surely put everything on the line to keep the Lions in Liga 3.

With Dahmani out Moritz Hartmann is expected to carry some of the attacking load up front. The striker is the club’s leading scorer with four goals and five assists. In general, Fortuna, like 1860, have struggled to produce goals this season but need to come up with a big win to keep their Liga 3 aspirations alive. 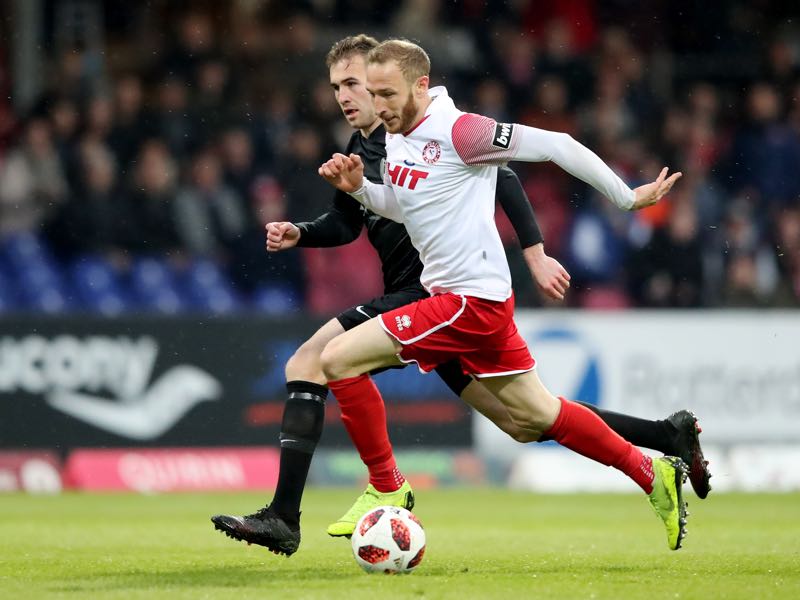 Marco Komenda of Meppen (L) challenges Moritz Hartmann of Foertuna Koeln during the 3. Liga match between SC Fortuna Koeln and SV Meppen at Suedstadion on May 06, 2019 in Cologne, Germany. (Photo by Christof Koepsel/Bongarts/Getty Images)