Alexander Nübel has often been compared to Bayern München keeper Manuel Neuer. It is an easy comparison to be made given that both keepers started their careers in Gelsenkirchen.

Then there is the look. Alexander Nübel looks and moves like the Bayern captain. Furthermore, the Schalke keeper has been heavily linked with a move to Bayern in recent months. But unlike Neuer, Nübel is not Gelsenkirchen born and bred, hence a potential move to Bayern would unlikely to result in the sort of fan protests that Neuer caused in the Bavarian capital back in 2011.

Koan Neuer (no Neuer) posters were held up in the Allianz Arena as Bayern wrapped up the transfer of the now Bayern captain at the end of the 2010/11 season. The 2014 World Cup winner, after all, is an outspoken Schalke fan and Bayern fans would have liked academy product Thomas Kraft to be given a fair shot at the position.

Neuer’s contract, however, will be up in 2021 and it is not certain what will happen once the contract runs out. The 33-year-old’s agent Thomas Kroth has recently suggested that the keeper could be looking for a new challenge. Then there is Bayern, with Neuer’s injury history it is beyond certain that they would renew his contract one more time.

Hence, Alexander Nübel has been heavily linked with a move to the Bavarian capital next summer. The 22-year-old can leave Schalke on a free transfer next summer after the club oversaw an option in the goalkeeper’s contract.

Alexander Nübel, however, took the starting position from Ralf Fährmann and managed 18 games for Schalke last season. As a result, his clause was no longer active, making Nübel a free agent. Schalke have since attempted to renew the keeper’s contract, but with his excellent performances, the 22-year-old has caught the eye of the likes of RB Leipzig and Bayern.

Hence, it is no surprise that Schalke signed another prospect for the position. Coming in from Dynamo Dresden is Markus Schubert, who backstopped Nübel at the U-21 European Championships in Italy and San Marino.

Furthermore, Ralf Fährmann has been sent out on loan for one season. The Schalke captain, however, is expected to return to the club next season given Nübel’s contract situation. 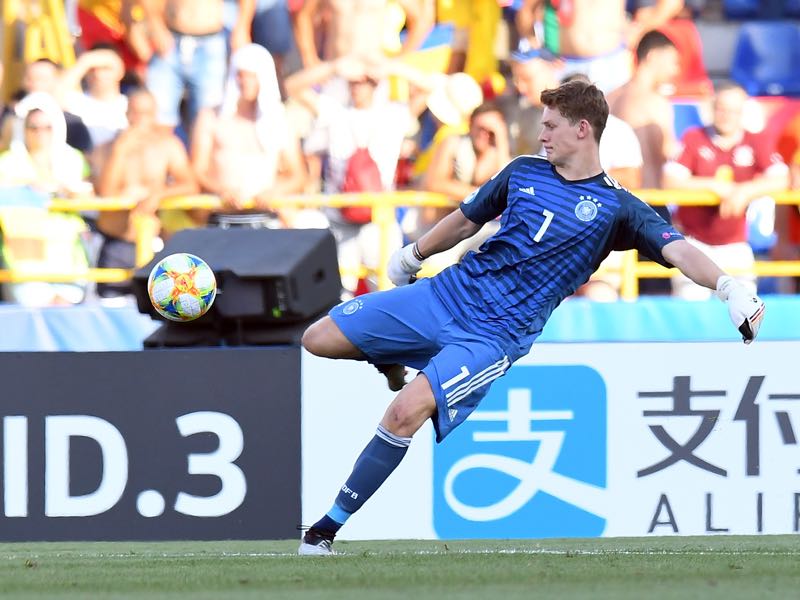 Alexander Nübel of Germany in action during the 2019 UEFA U-21 Semi-Final match between Germany and Romania at Stadio Renato Dall’Ara on June 27, 2019 in Bologna, Italy. (Photo by Alessandro Sabattini/Getty Images )

Speaking of the U-21 Euros. It was at that tournament that some of Nübel’s strengths and weaknesses were at the forefront. Good on the line and with the ball at his feet Alexander Nübel did indeed look like a young Neuer, both in the good and the ugly. Because like a young Neuer, Nübel still makes some mistakes when it comes to timing his runs out of his goal.

One good example is the penalty that he caused against Austria. Coming far out of his six-yard box the goalkeeper hit Austrian striker Sasa Kalajdzic with his knee while going up for a cross. The referee pointed to the dot right away, a harsh decision, but given the new goalkeeper rules the right call.

It is somewhat typical of young keepers to learn to control the box and judge positioning. The same could be witnessed in a young Neuer, who seemed clumsy at times when it came to his very offensive game. But overall, that approach worked, and Neuer can forget about mistakes and play on without becoming a danger for his defence.

The same is the case when it comes to Alexander Nübel. The keeper was excellent for the remainder of the game and secured Germany an essential point in the 1-1 draw against Austria. “[Alexander Nübel] was there 100% and kept us alive,” head coach Stefan Kuntz said after the game. “He is a class goalkeeper,” teammate Luca Waldschmidt added. “In general, he played a fantastic tournament we could always rely on him,” the Freiburg striker added. 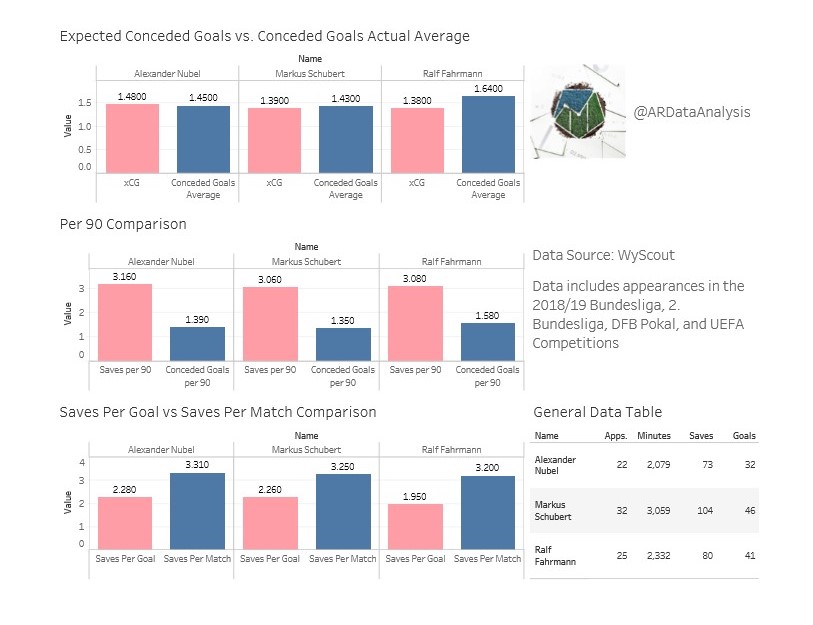 With the European Championship in mind, it becomes quickly apparent why Schalke opted to go with Nübel into the new season despite his complicated contract situation. Using last season’s data Alexander Nübel had a lower conceded goals per average than Fährmann even though his expected goals per average was higher than that of the Schalke keeper (see graphic above).

What stands out in the graphic is that Schalke’s new number 2, and Nübel’s possible successor, Schubert conceded less goal on average than either Nübel and Fährmann. Schubert, however, achieved his numbers playing in Bundesliga 2 and the 21-year-old has to show yet that he can play at the highest level.

Overall, what becomes apparent is that Nübel, in general, has outperformed Fährmann last season. The two keepers, in fact, can be measured easily against one another as they have played a similar amount of games for the same club.

But how does Alexander Nübel compare to Manuel Neuer? Data collected in March when Manuel Neuer was under fire for his subpar season highlighted that the Schalke keeper outperformed his predecessor as well. Up until the end of March Neuer had only made 1.390 saves per goal, and just 1.330 saves per match in the Bundesliga, which combined makes him the keeper with the worst statistics in the Bundesliga.

Neuer conceded 0.88 goals per 90 minutes last season, which matches his xCG of 0.88. In other words, Neuer stopped what he needed to stop. Nübel’s xCG, however, was higher than the number of goals he conceded (see graph). Hence, the 22-year-old made the occasional unexpected stop.

What also stood out was save percentage. Manuel Neuer managed to save 66.94% of his shots on goal, which was slightly less than Nübel’s 69.44%. Also, and this is surprising, Nübel made more exits (1.53) per 90 minutes than Neuer (0.56) over the last calendar year.

Nonetheless, the numbers highlight that Alexander Nübel is the best keeper in the Schalke system. It also shows why Schalke are desperate to renew the keeper’s contract even if it would include an exit-clause. Because make no mistake come 2021 when Neuer’s contract is up there will be a great goalkeeper reshuffle in Germany, and perhaps Europe, that in all likelihood will include this wonderful Schalke talent.