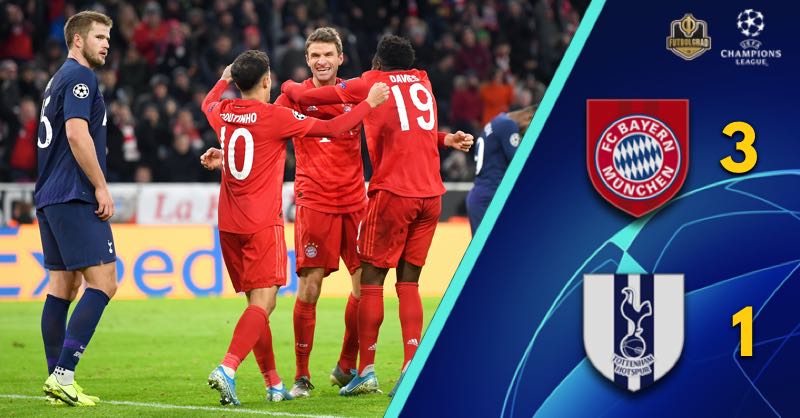 It might have been a dead-rubber, but after two defeats in the Bundesliga Bayern Munich wanted to turn around their fortunes with a win today. New Tottenham boss José Mourinho heavily rotated his side. In the 14th minute, Kingsley Coman opened the scoring with a curled effort. But just six minutes later, Ryan Sessegnon scored the equalizer with a beautiful volley. Then in the 24th minute, Bayern lost Coman to a freak injury, the Frenchman had to be taken off after falling awkwardly after chasing down a ball on the left flank. The goal and the injury somewhat took the wind out of Bayern’s sails. Nonetheless, the Reds would have the final chance of the first half when first Serge Gnabry hit the post, and Thiago failed to put away the rebound (39′). Just three minutes later, Alphonso Davies hit the post, but this time, Thomas Müller put away the rebound.

Bayern kept the pressure up into the second half, but Tottenham remained compact, allowing the Reds only a few scoring opportunities. Nonetheless, Bayern found a way through. In the 65th minute, Philippe Coutinho had just a split second at the edge of the box, enough to hammer the shot past keeper Paulo Gazzaniga to double Bayern’s lead. That goal put it away for Bayern. Neither side seriously threatened, preferring to rest the legs for upcoming tasks in the domestic competitions. 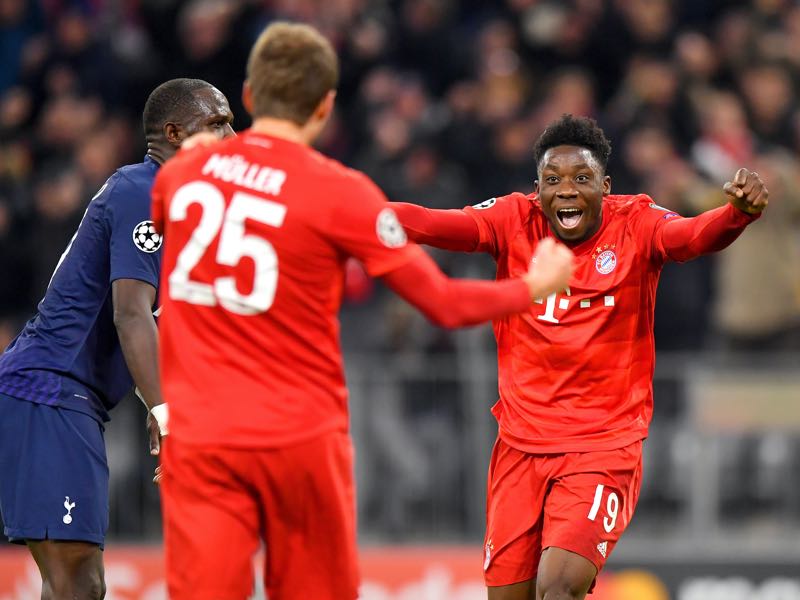 Davies handled himself well today. A good sign too, given that he had to play without the help of “wing-man” David Alaba. The “accidental” assist to Müller’s goal and the actual assist to Coutinho’s goal were icing on the cake. Davies won the far majority of his ground duels and was accurate in his passing. What remains a concern is the tendency of giving away possession and the way he still is not quite comfortable in his new position. That said this was defensively his best game.

Watching Manuel Neuer is always exciting. The goalkeeper re-invented the role of the sweeper-keeper but has not been as active as tonight in a long-time. A heatmap revealed that he even played left-back at one stage tonight. Neuer is always active but this has been the most active he has been in some time. Furthermore, with just minutes to go, Neuer made a fantastic stop to keep out Heung-Min Son.

After providing an assist in his first Champions League game on matchday 4, Ryan Sessegnon scored his first-ever Champions League goal on Wednesday. The talented winger was sensational at Fulham last season but has only been sparingly used at Tottenham. A shame given his obvious talent.

Bayern collect all 18 points in Group B. A performance that is in stark contrast to their Bundesliga form. For interims head coach Hansi Flick the result is good news. Bayern played well in recent weeks but fell to Leverkusen and Gladbach. With three points in the back, the Reds will have tanked some confidence ahead of the three Bundesliga games in the Bundesliga. One concern is the injury to Coman.

Tottenham will care little about this result. Jose Mourinho tested several young players and will like what he has seen from the cohort of youth players.