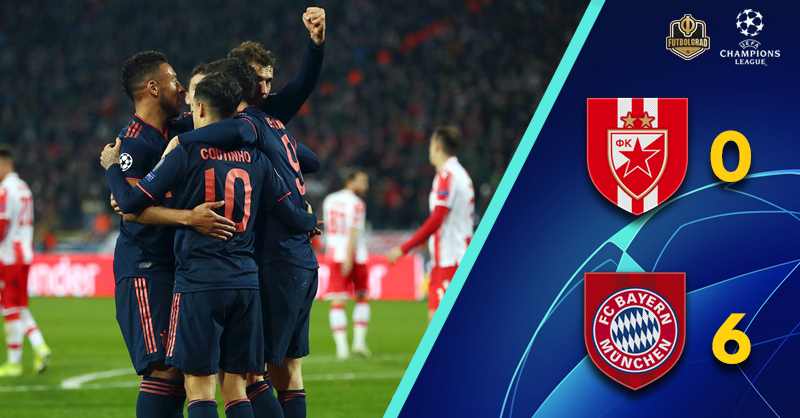 Knowing that a win would secure them first place in Group B, Bayern Munich came flying out of the gate. Robert Lewandowski (9′) and Kingsley Coman (12′) had early chances. Then in the 14th minute, Philippe Coutinho produced a brilliant cross that Leon Goretzka headed home. Just two minutes later, Goretzka tested Crvena zvezda keeper Milan Borjan with a shot outside the box. The Canadian goalkeeper came up big on this occasion and, in general, was the best Crvena zvezda player on the pitch. The Serbians were also lucky that Lewandowski had a beautiful goal ruled off after the ball touched Corentin Tolisso’s arm in the buildup.

Saved by VAR, Crvenz zvezda were still in it going into the second half. But not for long. In the 53rd minute, former 1860 Munich defender Milos Degenek had handled the ball in the box. Robert Lewandowski stepped up and scored from the spot. Lewandowski was not done there, however. In the 60th minute, Coutinho sent in a cross from the left that found Tolisso; his header fell to Lewandowski, who tapped it across the line. It was now all about Lewandowski. The Polish striker added third with a beautiful header in the 64th minute and then scored a fourth in the 67th minute. Lewandowski came off in the 77th minute, but Bayern kept up the pressure and Tolisso added a sixth in the 90th minute. 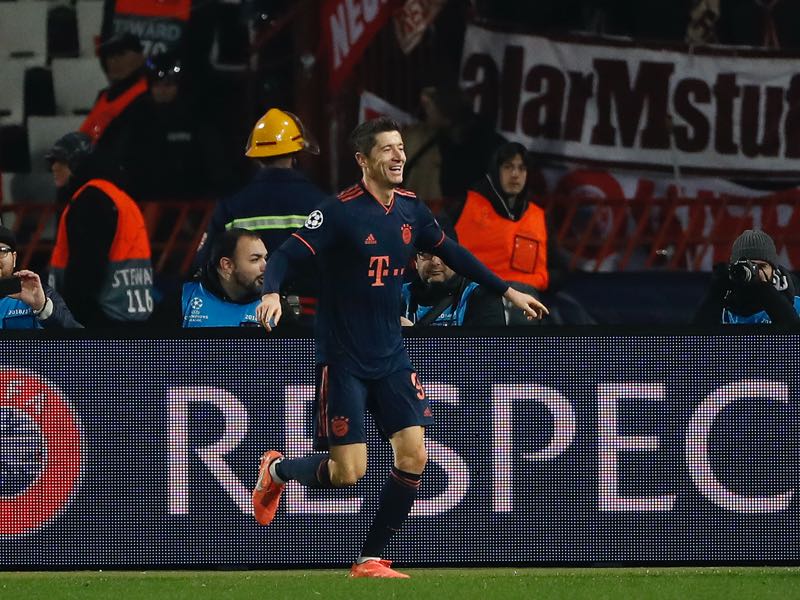 The Polish striker scored four goals in a row to complete a natural hattrick in the second half. Lewandowski also had a goal ruled off in the first half. Lewandowski now sits top of the goalscoring chart in the Champions League with ten goals in just five games. In the 77th minute, coach Hansi Flick opted to take off the striker, a good call given Lewandowski’s importance to the side.

The midfielder’s good form continues. Goretzka scored in both games for Germany over the international break. Tonight he was Bayern’s most dangerous player in the first half. Not only did he score but he also tested Borjan with a great strike in the first half. Always dynamic Goretzka is perhaps the best player in the squad when it comes to linking up midfield and attack.

Milan Borjan kept his side in it with three spectacular saves in the first half. In the second half, Borjan remained busy but was without a chance as Lewandowski ran rampant against Crvena zvezda’s defence. His biggest stop in the second half came when Tolisso was through on a one-v-one situation but the Canadian stood tall to keep the ball out.

Bayern have secured first place in Group B in convincing fashion. The Rekordmeister scored 21 goals in the first five games of the competition. They produced convincing displays against Tottenham and tonight against Crvena zvezda.

The result also means that Bayern can now relax and focus on the Bundesliga. But what about their Champions League ambitions? According to FiveThirtyEight Bayern Munich are second only to Manchester City as the predicted favourites to win the competition. It would be a remarkable achievement by Hansi Flick that might secure him the job beyond this summer.