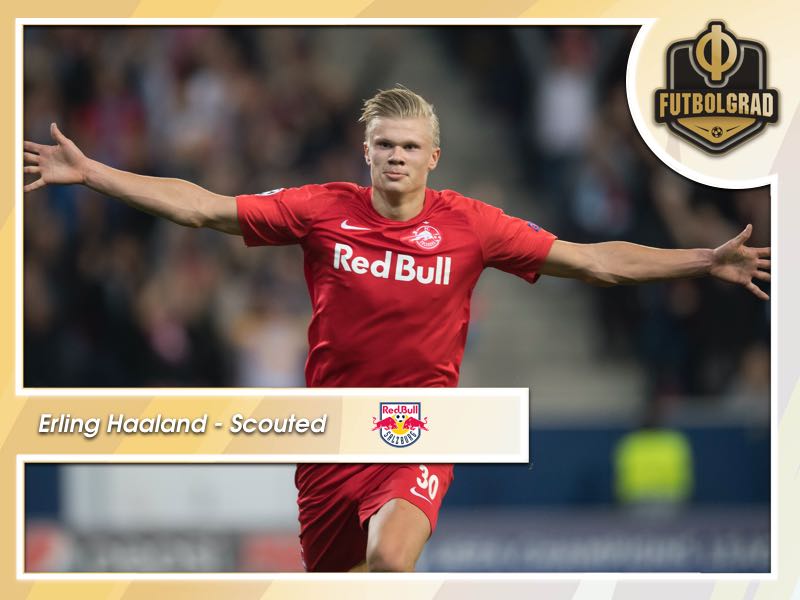 Erling Haaland – What is next for Red Bull Salzburg’s striker?

The phenomenal numbers do not end there, however. The striker has taken part in 69% of Salzburg’s overall playing minutes but has been involved in 37% of the club’s 82 goals this season.

With that in mind, it is no surprise that the Norwegian striker is on the radar of several top clubs. Manchester United, Napoli, Juventus and Borussia Dortmund have all been linked to the striker. Bayern Munich and RB Leipzig have also been listed, and despite reports from England, both teams appear to be among the frontrunners when it comes to signing Erling Haaland.

German magazine kicker reported on Thursday that Bayern Munich has taken a closer look at the striker already. The Rekordmeister already was already interested two years ago but decided against signing the then 17-year-old from Molde FK. The question Bayern will have to answer, according to kicker, is whether they are willing to spend in the region of €30 million to €40 million for a forward, who would currently be a backup to Robert Lewandowski.

Lewandowski is, without a doubt, the world’s most productive forward at the moment. The Polish forward has scored an unbelievable 23 goals in 18 competitive games for Bayern Munich this season (including six goals in four Champions League games). Without a doubt, Lewandowski has carried a Bayern side that at times was mediocre this year.

Despite his phenomenal goalscoring ability Erling Haaland would at the moment play second fiddle to the Polish striker at Bayern. “The tactical requirements at Bayern and Liverpool would be a bit too high for now—after all, he has only played in Norway and Austria so far. And also there for a short time,” said his former coach Alf Ingve Berntsen, who worked with Haaland at Bryne FK, in an interview with Spox.

At the same time, Bayern will have to start the succession planning in the attack sooner, rather than later. Lewandowski will turn 32 next year, and there is no guarantee that the Polish national team player can keep his consistent goalscoring rate going into the fall of his career.

Furthermore, playing with or next to Lewandowski would aid Haaland in his tactical development. As a big centre-forward, Haaland has, without a doubt, benefited from Salzburg’s chaotic counter-pressing attacking style. It is a system that is used by all Red Bull clubs and coaches that have previously worked in Salzburg. Sooner or later, the striker would have to make the next step and play in a more static system like it is the case at Bayern Munich.

The conclusions drawn by kicker and his former coach Berntsen, therefore, only make sense at first glance only. Erling Haaland could provide Bayern with a long-term perspective upfront and, even in the short-term, could provide a much-needed alternative for the Polish striker.

At the same time, there is a serious alternative for Erling Haaland when it comes to his next move. Like it is always the case for players in the Red Bull system, there is a natural progression of development. First, a player gets spotted and then moved to Salzburg, where he will be introduced to the difficult tactical schematics of the Red Bull brand of football as outlined by Ralf Rangnick.

Then after some seasoning comes a move to Leipzig. The 19-year-old Norwegian would be the 17th player to move between Salzburg and Leipzig. Both Transfermarkt and Bild reported in November that RB Leipzig head coach Julian Nagelsmann would like to see the Norwegian make the move from Austria to Germany.

It would be a transfer that would make sense for all parties involved. Under Nagelsmann Leipzig are supposed to take the next step in their development and challenge for the Bundesliga title; as such, it would be imperative to improve the squad but also deny Bayern Munich a key signing—especially as Bayern can sign Timo Werner thanks to an exit clause.

Erling Haaland would find the transition from Salzburg to Leipzig presently. At the same time, the striker could play at a higher competitive level and learn more tactically nuances under Europe’s most talented coach—for example, when compared to elite strikers like Lewandowski, Haaland still struggles with simple things like pass completion (66.44%). At Leipzig, for example, the game would not be wholly catered towards a big number 9 upfront but rather to two, or even three strikers.

What it would mean for Haaland to work under Nagelsmann can currently be witnessed in Werner’s development. Nagelsmann is currently molding the 23-year-old into a more effective box-scorer and has already seen some early success. Werner has scored 15 goals in 17 competitive games—including 11 goals in 11 Bundesliga games.

When comparing Werner to Haaland and Lewandowski, it stands out that the 23-year-old has the highest success rate when it comes to shots on target (57.81%). Furthermore, Werner also leads the three with 1.34 key passes per 90 minutes, despite increasing his goal productivity this season. Werner’s development should give Erling Haaland some food for thought. Only 19 the striker still has time to complete his dream of playing for one of Europe’s elite clubs in England, Spain, Italy or Germany.