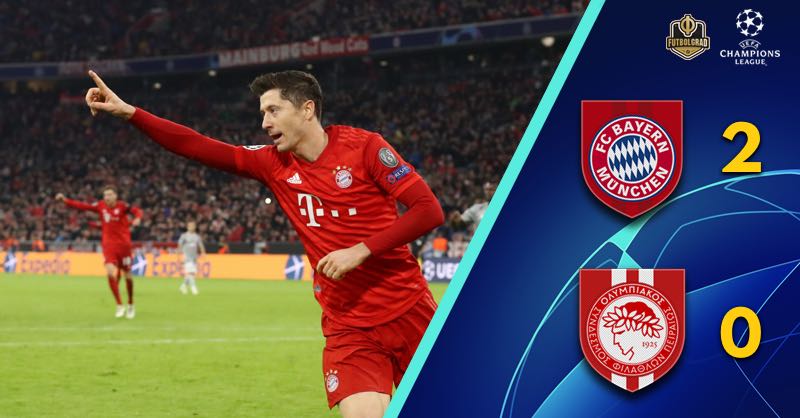 How would Bayern Munich react to Niko Kovac leaving the club in front of a 70,000 capacity crowd at the Allianz Arena? Expectantly Bayern took control of the match. Olympiacos keeper José Sá was quickly the busiest player on the pitch. In the 24th minute, Robert Lewandowski tested him with a great header. Then in the 31st minute, Kingsley Coman slalomed through the defence and was also stopped by Sá. Gnabry had an effort from inside the box saved in the 35th minute. Finally, Benjamin Pavard‘s header after a corner hit the post in the 45th minute. The Bavarians certainly put in a good shift, but at the same time, they struggled to dissect a limited Olympiacos side.

Bayern’s pressure continued into the second half. Sá made yet another save in the 50th minute, keeping Leon Goretzka’s short-range header out. The flood of chances continued. Thomas Müller (56′) saw a shot blocked and Coman (60′) a dangerous cross defused by Sá. Finally, in the 68th minute, Robert Lewandowski does what he always does, which is score goals; this time, it was a tap in from a Coman cross. One way traffic continued and in the 89th minute, Ivan Perišić, who had only come on seconds before, scored with his first touch of the ball. 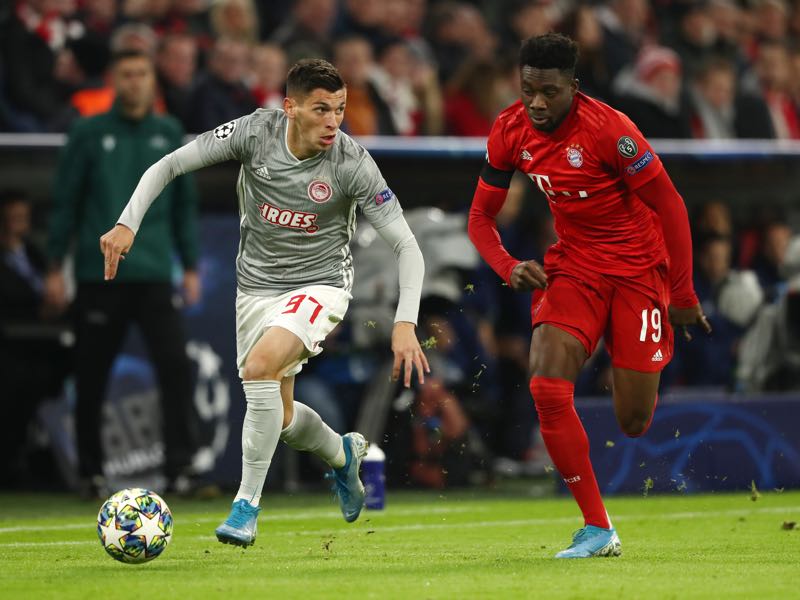 We reporters probably sound like a broken record. But Robert Lewandowski remains Bayern’s life insurance. The Polish forward scores and scores and scores. Going into the game, his record was a goal every 63 minutes across all competitions. Today it took Lewandowski until the 68th minute to score his 21st goal in his 17th game.

Another start for Alphonso Davies. Hansi Flick said ahead of the game that he wanted to test this backline for the Dortmund game. Based on today’s game Davies will have an excellent chance to start the Klassiker on Saturday. The 19-year-old Canadian once again made a step forward in his defensive play. Where he was bullied at times by Danny da Costa on Saturday, he was more solid against Olympiacos. The next step for Davies is to become more expansive in his attacking play.

The Olympiacos keeper was excellent. Bayern had one wave after another seen off by the 26-year-old goalkeeper. The keeper had nine saves, six coming from shots inside the box. Sá was without a chance against Lewandowski.

The result was probably not as decisive as Bayern fans wanted it. But there were plenty of positives from match one after Niko Kovač. First, Bayern are qualified for the round of 16 of the Champions League. Second, Flick’s team will have tanked some confidence ahead of the Klassiker against Dortmund.

Dortmund, however, convinced last night against Inter Milan. While Bayern’s defence held against Olympiacos, there is no doubt that Dortmund will be a much sterner test for this put together backline with David Alaba as a centre-back, Benjamin Pavard in right-back and Davies in left-back. But for now, the result will take some of the pressure off and give Flick time to work until Saturday.