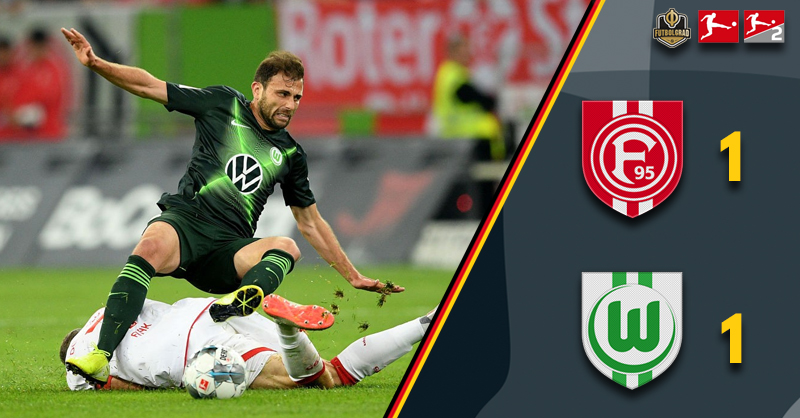 Friday night ended in a whimper as Fortuna Düsseldorf and Wolfsburg played out a one-one draw, both sides must find improvement if they harbour any chances of achieving their overall aims come May.

There was little to note during the opening fifteen minutes of the fixture, both sides looked to have left their passing and shooting boots back in the changing room – or potentially on their respective team busses.

Josip Brekalo’s shot on two minutes suggested Wolfsburg may have been in the mood to test Zach Steffen, but in truth, their early play in the final third warranted nothing more than the misplaced passes on offer.

It was a dull affair, that was until Niko Gießelmann woke the Merkur-Speil up. His rocket on 17 minutes a wonderful mixture of technique and power – the ball nestling in the top left corner to which Pavao Pervan was a spectator.

Had the ball gone out of play in the build-up? VAR checked and said no – replay footage seemed to suggest the ball was over the line when Matthias Zimmermann drove down the Fortuna right, but there was a potential that the very edge of it was just over the thinnest line of paint – it was a tight call either way, but the original decision stood.

The hosts pushed for a second – Zimmermann blazing high and wide, but Wolfsburg were beginning to find a way back into the fixture. Brekalo creating problems as the team from the Autostadt pressed for an equaliser.

It was the Croatian’s creativity that allowed Wout Weghorst to keep up his pre-match record of being involved in at least one goal in his last four Bundesliga outings. The Dutch forward made it five on 29 minutes – his finish from close range capping a wonderful passage of play.

With the second-half just sixty seconds old Maximilian Arnold had a chance to double the visitors’ score – Steffen was on hand to deny the midfielder, saving well to his left side. The American has looked a solid addition to the Fortuna squad since his arrival from Manchester City in the summer.

Both Brekalo and Weghorst should have done better with their chances on 48 and 53 minutes respectively – after a poor start the visitors seemed to have found their rhythm, Oliver Glasner was becoming ever more animated as the hour mark passed – despite his side being in control the Austrian was demanding more from the sideline.

The hosts had the better moments as the final whistle loomed, it was though, their final ball into Rouwen Hennings that let them down time and time again. Something Friedhelm Funkel has to rectify if they want to turn opportunity into points.

Wout Weghorst celebrates after he scores his teams opening goal during the Bundesliga match Fortuna Düsseldorf vs Wolfsburg at the Merkur Spiel-Arena on September 13, 2019 in Duesseldorf, Germany. (Photo: Lukas Schulze/Bongarts/Getty Images)

With five goal contributions in his last five Bundesliga games, the Dutchman showed just how crucial he is to Die Wölfe’s challenge to once again finish in the European places. His calm finish added to a new personal best of six goals and two assists from the last 450 minutes of football.

The right-back opened the night’s proceedings with a tremendous strike, his expert positioning allowed him to capitalise on some slack Wolfsburg marking. As the ball fell to him unmarked he only had one thing on his mind – it was a superb finish.

The American goalkeeper has impressed since his summer loan transfer from England. The 24-year-old looks comfortable with the ball at his feet while also commanding the area with his presence and communication. With three good saves inside the area, he looks to be making the transition from Major League Soccer to European football with ease.

It was a fixture with little overall quality. Fortuna are lacking any real bite come the final third and Wolfsburg simply must improve if they wish to hit their ambitions of a high placed league finish once again. Oliver Glasner must also ensure the Europa League doesn’t become an unwelcome distraction – on this showing K.A.A Gent and AS Saint-Étienne have little to worry about.