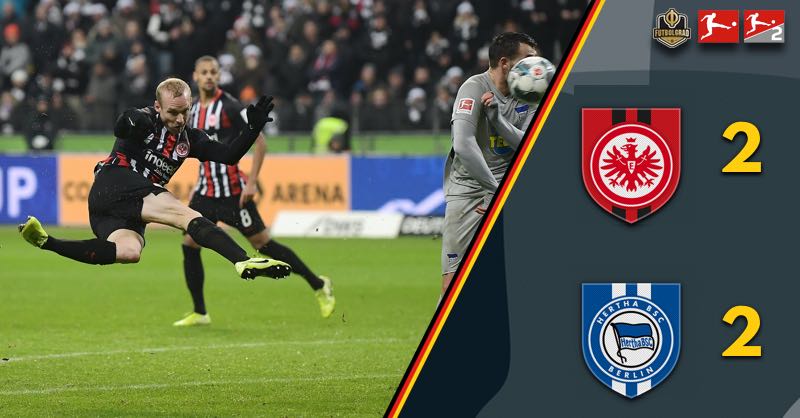 It was an entertaining start to the first half. Davie Selke for Hertha (13′) and Almamy Touré for Frankfurt (19′) produced chances early on. Then in the 28th minute, Martin Hinteregger joined an attacking rush, but keeper Thomas Kraft stopped his shot. Going the other way, Dodi Lukebakio opened the scoring for Hertha. Picked out by Marko Grujić, the Belgian poked the ball through Frederik Rönnow’s legs. Frankfurt were the better side, and the Eagles thought they had the equalizer when Daichi Kamada scored in the 38th minute. But the goal was waved off for a foul committed by Filip Kostić in the buildup.

It was a scrappy start to a second-half in which Frankfurt pressed, and Hertha were happy to sit deep and look for attacking opportunities on the break. In the 63rd minute, Hertha doubled the lead when Dedryck Boyata picked out Marko Grujić inside the box. But Frankfurt were quickly back in it thanks to a Martin Hinteregger header in the 65th minute. Frankfurt then thought they had the equalizer after a big mistake by Kraft but saw the goal chalked off as André Silva made minimal contact with the keeper. Frankfurt were soaring now, and in the 86th minute, Sebastian Rode scored the equalizer following a Kamada corner. Frankfurt wanted more, but Hertha were able to hang on for their first points under Jürgen Klinsmann. 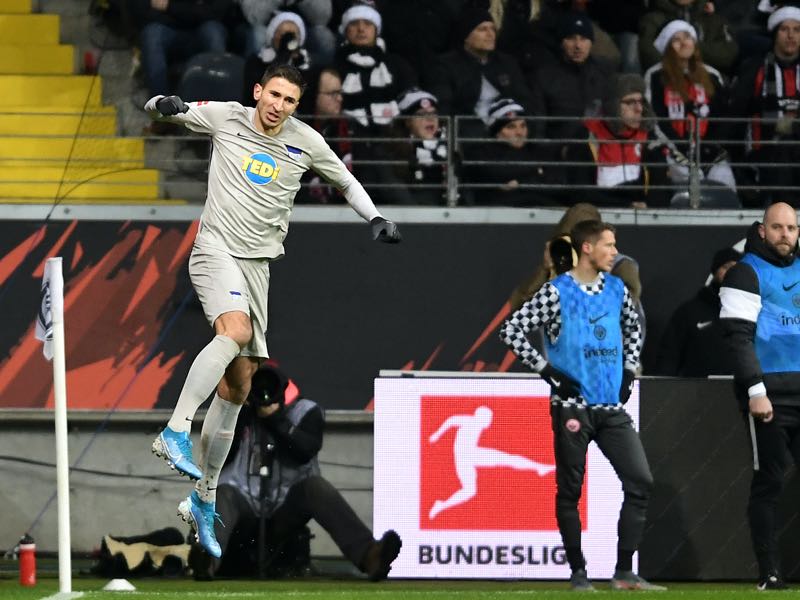 Frankfurt v Hertha Berlin – Marko Grujic of Hertha BSC celebrates with his team after scoring his sides second goal during the Bundesliga match between Eintracht Frankfurt and Hertha BSC at Commerzbank-Arena on December 06, 2019 in Frankfurt am Main, Germany. (Photo by Alexander Scheuber/Bongarts/Getty Images)

The Serbian on loan from Liverpool was excellent tonight. Marko Grujić set up Dodi Lukebakio for Hertha’s first goal with a fantastic pass between two defenders. Then in the second half Grujić scored himself with a close-range tap in goal. The Serbian has been under pressure lately for his poor performances but perhaps the coaching change from Ante Cović to Jürgen Klinsmann has lifted a weight off his shoulders.

The Japanese playmaker is slowly emerging as Frankfurt’s biggest shooting star. A typical number 10 Kamada was the hero against Arsenal one week ago. Today Kamada believed he had scored his first-ever Bundesliga game but his fantastic effort was chalked off after a VAR review. Nonetheless, Kamada was always dangerous and involved in all of Frankfurt’s attacking plays.

Martin Hinteregger is increasingly becoming Frankfurt’s most important player and perhaps one of the best centre-backs in the league in general. The Austrian is not only solid in defence but also has the ability to join the attack not just on set pieces but also from open play.

It was both a scrappy but also attractive clash at the Waldstadion in Frankfurt. For Hertha, a win would have been very important to make a jump away from the relegation zone. But instead, the capital club will look at this as two points lost in the relegation battle.

Frankfurt will also be disappointed. The Eagles were the better side and had two goals rightfully chalked off by VAR. For Frankfurt, the biggest issue has been creativity in the attack, and a lack of freshness, a symptom of a very congested match calendar perhaps.

Loading...
Newer Post
Gegenpressing – Bundesliga Podcast – Breaking Down The True Klassiker
Older Post
Gladbach and Bayern Munich face each other in the revival of the true Klassiker