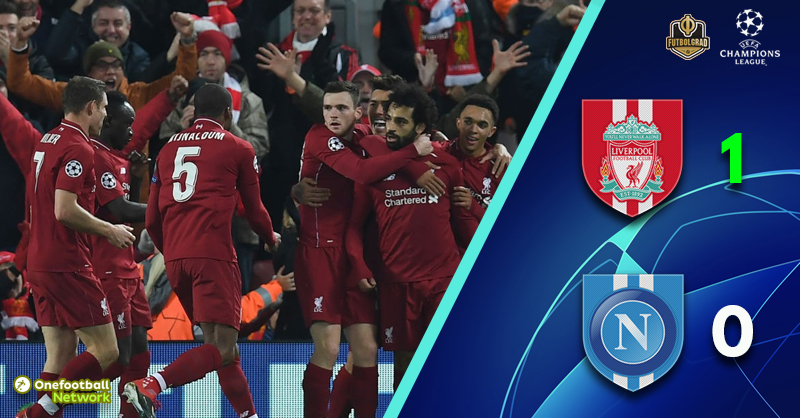 Liverpool edge past Napoli in a Champions League epic encounter

Liverpool vs Napoli was 94 minutes of pure footballing brilliance – Last season’s finalists eventually qualifying at the expense of their Italian visitors. It was yet another famous European night under the lights at Anfield.

Anfield was loud and expectant, it was an atmosphere that had frozen visiting sides at times last season – as well as propelling those in Red all the way to the end stage.

It was no different for this knife-edge fixture, a one match shootout with the victor taking the spoils of a last 16 place come the spring. As the game got underway there was a cacophony of noise from both sets of fans, the players stepped up as the game immediately fired into life.

With just eight minutes gone the match had its opening chance. Mohamed Salah picked out wingback, Andrew Robertson – the Scot, in turn, repaid the favour and Salah was in behind the Napoli back line.

Surprisingly, the Egyptian’s first touch let him down and the ball bounced off his shin and back to a grateful David Ospinsa – Liverpool had broken through the Italians defensive wall inside 10 minutes.

This close shave fired the visitors into life – Marek Hamšík fired a first-time shot over the crossbar from the edge of the box after a fast Napoli break. Liverpool broke back at speed, James Milner out-jumped Nikola Maksimović and just steered his header over the bar – this game was now fully alight.

Back and forth the play went, both sides tussling and probing for the opening goal. It was to be the hosts who would hit the net first. Who else but Salah –  the forward rolled past Mário Rui and Kalidou Koulibaly beautifully before slotting the ball past Ospina.

Liverpool had the lead they needed to advance out of Group C, as the half time whistle blew it was advantage Red.

As the teams came back out the one-nil deficit meant Napoli now faced the prospect of playing Europa League football after the winter break. The Italians knew it, they must have, they flew out the blocks – attacking the end were their fans were congregated.

Liverpool held their shape, then after riding an early storm they began to turn the screw on the visitors – Klopp’s men were in search of a bigger cushion.

Salah almost doubled Liverpool’s lead on 52 minutes, skimming the side netting with a snatched shot – Napoli began to look nervous and the Reds could sense it.

So began ten minutes of sustained attack, it was the Italian’s who had to batten down the hatches – Koulibaly was just about keeping the Gli Azzurri afloat. The Senegalese defender was a calming presence in an ever increasing melting pot of a fixture.

On 65 minutes the pendulum swung and Napoli began to threaten the Reds’ Champions League future – however the Italians were unable to find the right final ball. Carlo Ancelotti looked to his bench, Piotr Zieliński was given the nod and the 24-year-old replaced Fabián Ruiz.

As the fixture crept towards the last 10 minutes the balance of  the tie flipped back into the hosts’ favour. Chance after chance went begging. Salah, Sadio Mane and then Georginio Wijnaldum all had opportunities to score. With both sides looking to attack, gaps began to appear at both ends but neither could that an all important finish.

Just as Anfield started to celebrate a famous victory there was a pause in proceedings. Alisson, the £65m goalkeeper showed why he was brought in, and why he was worth every penny –  producing a huge stop on 93 minutes to keep out Arkadiusz Milik from close range.

The save was cheered like a goal, the Brazilian was rightly lauded as he left the pitch sixty seconds later. Liverpool had completed their objective – the Champions League dream was still alive.

Liverpool vs Napoli – Man of the Match

There were multiple candidates from both sides, it was a team performance that both managers could be proud of. When the moment mattered though there were two instances of brilliance.

Firstly Mo Salah skipped past the Italian back line like a dancer in full flight while at the very death, Liverpool’s goalkeeper Alisson showed just why the Reds had broken the world record transfer fee for him.

It was the Brazilian’s wonderful save deep into added time that kept Jürgen Klopp’s Liverpool in the competition, and for this reason, his stop was as worthy as any game winning goal. 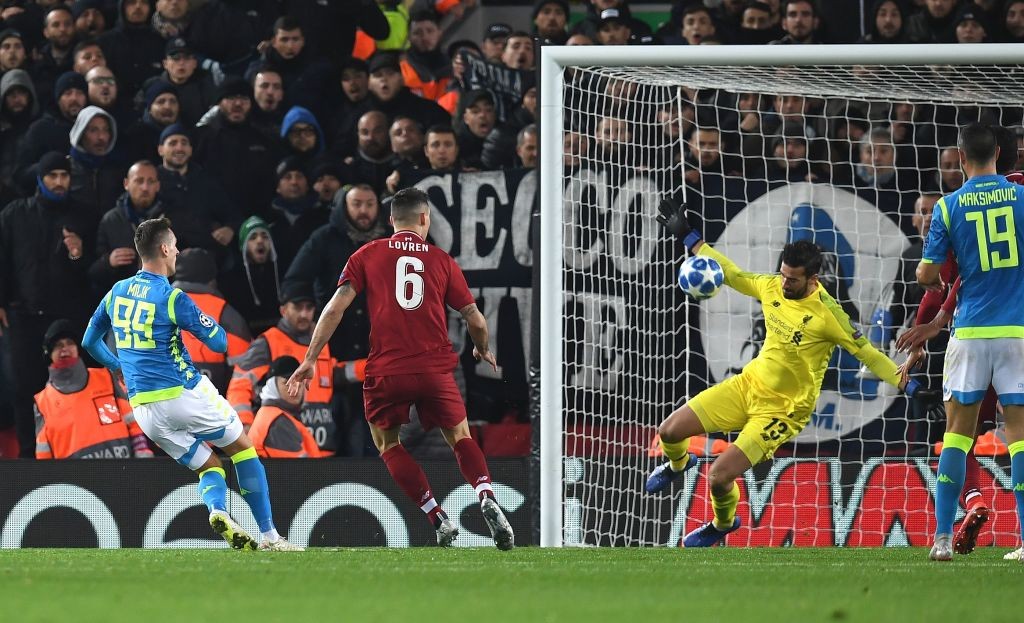 Liverpool’s Brazilian goalkeeper Alisson keeps his side in the Champions League with a wonderful save during Liverpool vs Napoli. (Photo: PAUL ELLIS/AFP/Getty Images)

Liverpool had ridden their luck over the Group C campaign. Poor performances away from home were eventually neutralised by excellent displays under the Anfield lights.

Should Liverpool wish to emulate their adventures of last season in this competition, they will need to take their home form away with them when the Round of 16 returns next year.