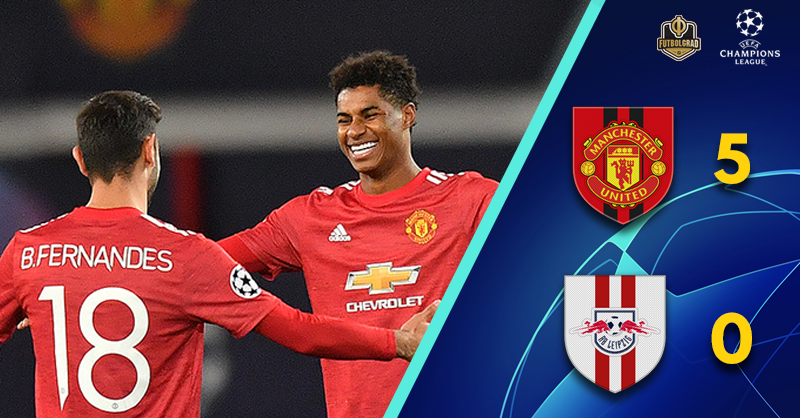 Leipzig were on the receiving end of a rout as Marcus Rashford’s second-half hat trick fired Manchester United to the top of Group H, on a night to forget for Julian Nagelsmann’s side.

RB Leipzig traveled to Old Trafford for the first time in their short history, but the Saxony side arrived with fond memories of their last appearance on English soil.

For the hosts, United were looking to extend an unbeaten home record against German visitors that stretched back almost 20 years – a record head coach Ole Gunnar Solskjær was keen to see intact come full time.

It was United who started the brighter, Péter Gulácsi called into action after just five minutes – the Leipzig ‘keeper diving to his right to stop Fred’s goalward bound strike.

The Bundesliga side were being exposed by United’s high frantic style, Julian Nagelsmann’s Red Bulls are conditioned to be the pressers not the pressed, and United’s attack continued – Anthony Martial found himself in behind the Leipzig backline but he was unable to pick out an unmarked Mason Greenwood at the far post.

Before the fixture started, Nagelsmann spoke about the danger posed by United’s pace, and with good reason – even without the likes of Marcus Rashford and Bruno Fernandes in the starting XI the hosts threatened with each venture into the final third.

It was no surprise to see the Red Devils take the lead after 21 minutes. Paul Pogba’s expertly weighted pass was seized upon by Greenwood, and the 19-year-old finished with grace and style, his pinpoint accuracy left Gulácsi no chance, and after a lengthy VAR check for offside, the goal eventually stood.

Fine margins indeed, but the freezeframe suggested level – if only the consistency of VAR across football would allow this.

Leipzig’s only real chance to equalize came in the 43rd minute, Angeliño skipped into the United box but he was policed well by Aaron Wan-Bissaka – it underlined the first half for the German club, good possession but little cutting edge in front of goal.

With little improvement after the break, Nagelsmann decided enough was enough. On came Marcel Sabitzer and Alexander Sørloth – the changes almost paid an immediate return.

Confusion in the United box over who was picking up who enabled Ibrahima Konaté to finally test David de Gea, but the Leipzig returnee saw his header tipped over the bar on 64 minutes from close range.

After an injury-riddled 2019/20 campaign it was good to see long-term absentee Konaté back in the white of Leipzig, and the 21-year-old was unlucky not to see his return iced with a goal from open play.

Solskjær then played his tactical hand, introducing both Rashford and Fernandes to try and hammer home the host’s advantage – Rashford was only on the field for a matter of minutes before got his golden chance, and the Englishman took it superbly.

Initially flagged for offside, VAR showed the forward was still in his own half when the ball from Fernandes was slipped into his path, blasting past the Leipzig backline Rashford finished wonderfully on 76 minutes, two minutes later he had his second and United’s third.

Dropping his shoulder, the striker glided past Dayot Upamecano before smashing the ball past Gulácsi, the Hungarian stood no chance with the power and accuracy of the shot.

Nagelsmann looked skywards and then to the ground, his Leipzig side had looked toothless – no real match for United in front of goal.

A late penalty from Martial – after being hauled to the ground by Sabitzer – just added insult to injury on a night that the Leipzig head coach will want to forget.

The quality in the final third the difference between the two sides, all evening, and Rashford completed the rout in injury time as he once again finished with power and perfection from close range. 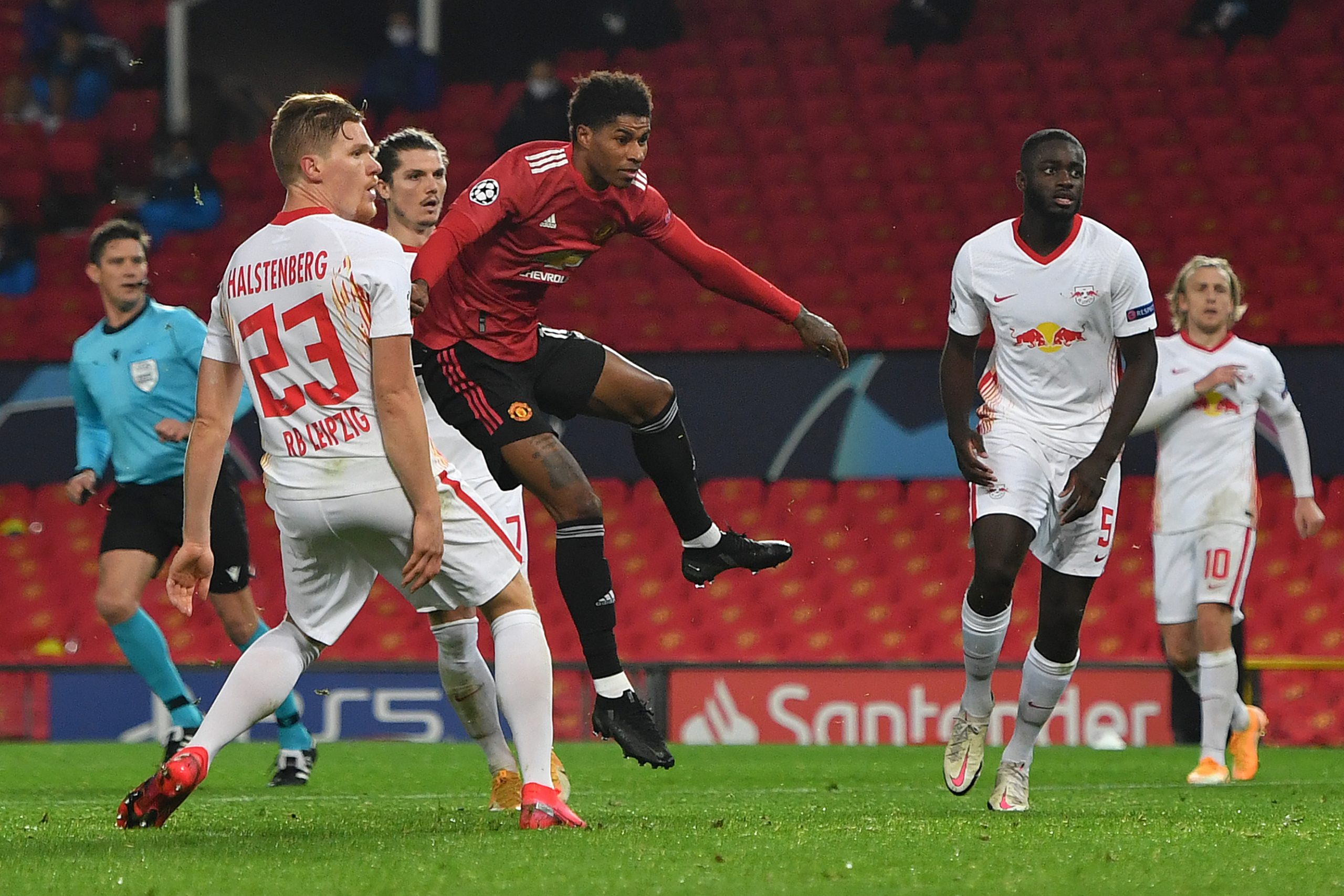 Marcus Rashford completes his hat trick after coming on as a substitute during Manchester United vs RB Leipzig. (Photo ANTHONY DEVLIN/AFP via Getty Images)

Within minutes of his arrival onto the pitch, United went from a closely balanced match to a walk in the park. Rashford’s pace is matched by his intelligence and ability in the box. Causing mayhem for the Leipzig backline, they struggled to keep their discipline in shape – Rashford’s movement frightened all in front of him and he duly picked up his hat-trick in injury time.

One of only two real performers on the night for the visitors, the Manchester City loanee tried his best to drive the Saxony side forward, but his biggest opportunity was quashed by a recovering Aaron Wan-Bissaka.

Often maligned and criticized, the Frenchman delivered a strong midfield performance – his energy levels were there for all to see, as was his creativity.