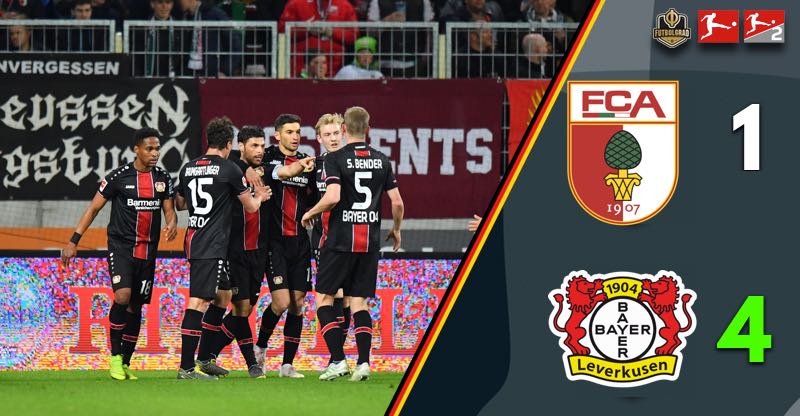 Augsburg v Leverkusen saw Bayer head coach Peter Bosz experiment with a brand new lineup. The Dutch head coach moved away from his 4-3-3 formation and started his side in an unorthodox 3-2-4-1. Although Augsburg scored first the tactical formation worked as Leverkusen smashed Augsburg.

Both sides were playing expansive attacking football from the go. Despite the attacking football, it was a set-piece that produced the first goal for hosts Augsburg. In the 12′ minute, defender Kevin Danso nodded home an out-swinging corner brought in by André Hahn.

Leverkusen, however, struck right back in the 15′ minute. Charles Aranguiz spotted Kevin Volland’s run into the box and the German international hammered the ball over keeper Gregor Kobel, the ball hit the underside of the bar before it hit the back of the net.

That goal opened it up for Leverkusen and in the 20′ minute the Werkself appeared to have doubled their goal count. Mitchell Weiser had sent in a perfect ball from the right that appeared to have made it 1-2 for the visitors, VAR, however, determined that Weiser was offside when he received the ball and the goal was chalked off.

Alario then had a big chance get Leverkusen up front in the 29′. Julian Brandt dribbled through Augsburg’s box, laid it off to Kai Havertz, who crossed it to Alario, the Argentine’s volley from just eight-yards out, however, missed the target.

Leverkusen at times had 70% possession in the first half. In fact, Augsburg were lucky to be level at halftime. In the 45′ minute, Alario was once again free inside the box, but his shot hit the underside of the bar and stayed out.

In the 49′ minute, Havertz produced a piece of magic to give Leverkusen the lead. Volland brought in a low pass to the centre of the box where Havertz looped the ball over keeper Kobel with a first-touch toe poke.

Then in the 57′ minute, Bayer had another goal chalked off by VAR. Defender Danso had scored an own goal from a Volland cross, but Jonathan Tah had been offside when the ball was played and interfered with the Augsburg defender.

Tah, however, was unfazed by the decision because just three minutes later he scored Leverkusen’s third. Kobel had parried a Brandt freekick, but Tah jumped on the rebound and smashed it home.

That goal settled it for Leverkusen, who were now cruising in the match. Not that that would stop them from scoring a fourth. Kevin Volland raced down on the left and played a low ball to the centre where Julian Brandt was left wide open to score Leverkusen’s fourth in the 89′.

Kai Havertz may have scored the goal of the game, but it was Kevin Volland, who was the best player on the pitch. The striker scored his 14th goal of the season in what was a shot equivalent to a hammer-blow. He then also assisted on two more goals and was a constant threat to Augsburg’s backline playing out of position as a left-winger. 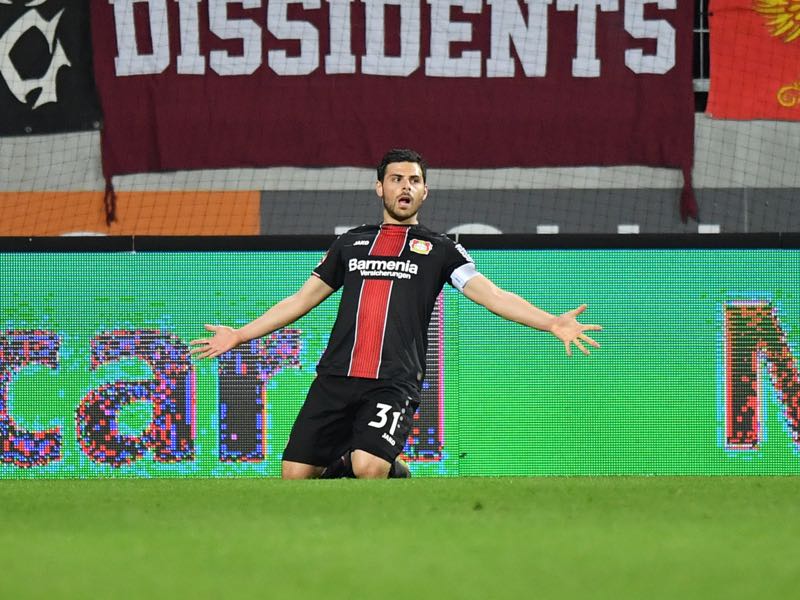 Bayer have been hot and cold. Leverkusen can be tantalising when they are on their game. A good example was tonight’s performance. Leverkusen were excellent, and the result was never in doubt. The Werkself, however, struggles to play this sort of football consistently, which could hurt them in the race for the European places.