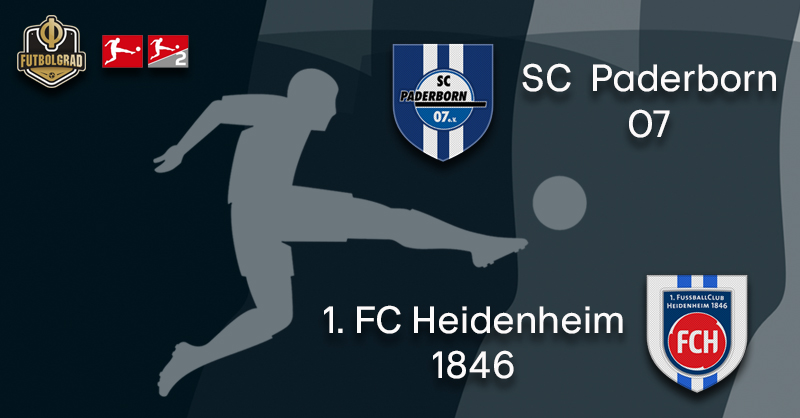 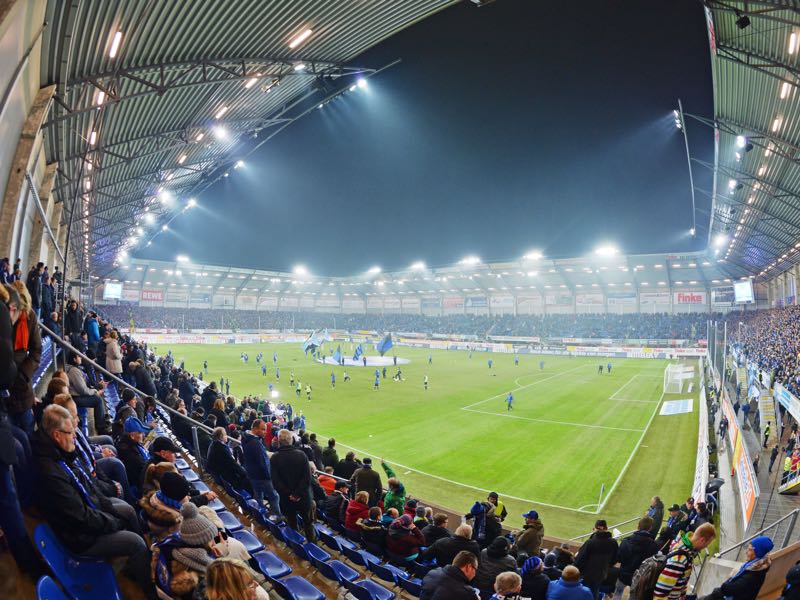 Paderborn vs Heidenheim will take place at the Benteler Arena in Paderborn. (Photo by Thomas Starke/Bongarts/Getty Images)

Paderborn have the potential to become one of the biggest stories in German football history. Relegated from the Bundesliga following the 2014/15 season Paderborn were once again relegated at the end of the 2015/16 season, this time from the second to the third division. But the downward trajectory did not end there as the North-Rhine Westphalians were also relegated from Liga 3 at the end of the 2016/17 season.

It was perhaps the biggest collapse in German football history. But Paderborn were given a lifeline thanks to 1860 Munich’s relegation and the DFB’s subsequent refusal to grant the Lions from Munich a third division licence. As a result, Paderborn remained in the third division and the following season were promoted back to Bundesliga 2.

Now back in the second division Paderborn are in third-place after matchday 30 just two points behind former Bundesliga giants Hamburger SV. The architect behind the success? Head coach Steffen Baumgart, who took over the club in April 2017 when the club was on the verge of Liga 3 relegation. In the 24 months since he has taken over Paderborn have scored 164 goals in 73 league games, won 41 games, drew 20 and lost just 12.

Baumgart has a point per game average of 2.1 and Paderborn have collected 13 points from the last four games. But the final program is challenging, first up is Heidenheim, then Hamburg come to town and Paderborn still have to visit Bielefeld and Dresden. “We won’t change our targets of the season. We have four exciting games left and will see what happens,” sporting director Marius Krösche told the media this week.

First up are Heidenheim. Like Paderborn, Heidenheim is what they call in Germany a village team (Dorfverein). Located on the border between Baden-Württemberg and Bavaria Heidenheim is a village of about 50,000 whose football club has become a model team thanks to the sponsorship of the Voith Group, a family company that sold €4.209 billion worth of products in the 2017/18 fiscal year.

Heidenheim are, however, not comparable with the company teams located in Leverkusen, Wolfsburg, Leipzig and Hoffenheim. Instead, the club’s ambitions traditionally have been to grow organically and to promote local youth. Hence, Heidenheim is a club were players that failed to make the next step at clubs like VfB Stuttgart, Bayern and Augsburg, who are all in close vicinity, get a second chance.

That does not mean, however, that Heidenheim are a club without ambition. In fact, the club from the Swabian Alp are right in the middle of the promotion race just two points behind Paderborn in fifth place.

On matchday 29 Paderborn dismantled FC St.Pauli in a 3-0 victory, and in general, the confidence is sky high in Heidenheim at the moment. “We were on fire,” head coach Frank Schmidt explained. The head coach, who was made famous by the Netflix documentary Trainer, is one of the main reasons for the club’s success. “The atmosphere is amazing, and the team spirit is great. A game like the one [against St.Pauli] is fantastic for the collective,” Schmidt added.

It should be an intriguing game on Sunday between two village teams that are battling for three points to feature in the Bundesliga next season. Both teams are in top form but Paderborn playing at home should have a slight advantage over Heidenheim.

Paderborn vs Heidenheim  – Players to look out for:

Philipp Klement has been in excellent form this season. The attacking midfielder has scored 15 goals and six assists in 27 Bundesliga 2 games this season. His goal rate, in fact, has been fantastic this season. Klement’s xG has been 0.25, yet the playmaker has scored 0.51 goals per 90 minutes. On average Klement has been involved in 78.91 actions per game this season of which he completed 66.4% successfully. It is, therefore, no surprise that the midfielder has been scouted by the likes of Schalke and Hamburg, who would like to sign him to Bundesliga contracts. 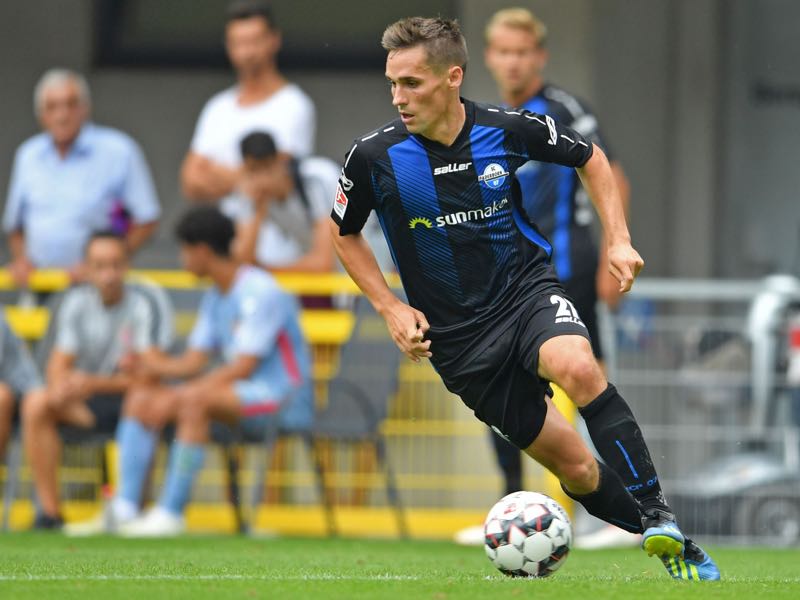 Niklas Dorsch is a great example of a player that failed to make the next step at a Bundesliga academy and found a second chance at Heidenheim. The 21-year-old defensive midfielder is a product of Bayern München’s youth academy but left Bayern on a free transfer last summer. In Heidenheim Dorsch has become a key player and both Eintracht Frankfurt and FC Augsburg have scouted the midfielder in recent weeks. Not the most spectacular player Dorsch gets the job done for Heidenheim, the midfielder has completed 62.6% of his on average 81.76 actions per 90 minutes this season. A fantastic passer Dorsch completed 88.2% of his on average 45.49 passes. 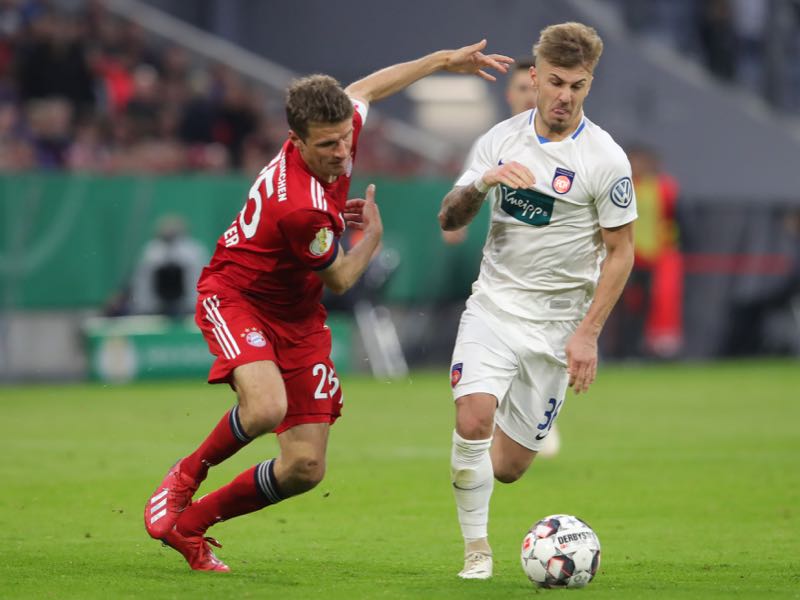 Niklas Dorsch of Heidenheim is challenged by Thomas Mueller of Muenchen during the DFB Cup quarterfinal match between Bayern Muenchen and 1. FC Heidenheim at Allianz Arena on April 03, 2019 in Munich, Germany. (Photo by Alexander Hassenstein/Bongarts/Getty Images)