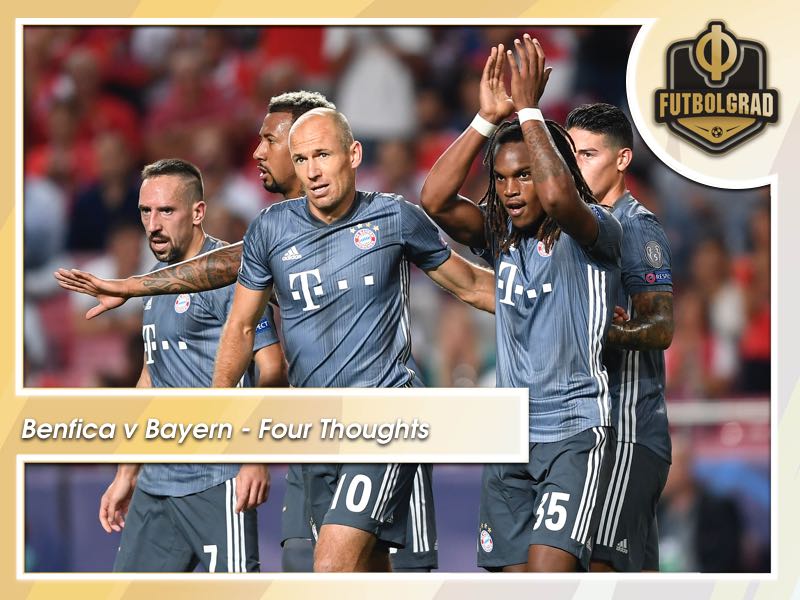 Benfica v Bayern München ended with a perfect start for the German Bundesliga record champions. Bayern defeated Benfica in Lisbon 2-0 thanks to goals by Robert Lewandowski (10′) and Renato Sanches (54′).

Overall, however, it was a simple exercise for the Bavarians in Portugal’s capital on Wednesday night as Benfica never put up a real resistance to challenge Bayern.

Bayern were right hanging on to Lewandowski

Robert Lewandowski once again highlighted that his goals are crucial. The Polish striker flirted with leaving the club this summer but ultimately was told to fulfil his contract by President Uli Hoeneß and CEO Karl-Heinz Rummenigge.

Lewandowski has thus far started every match this season showing that Niko Kovac has 100% trust in the striker and Lewandowski has shown little discontent with the club’s decision to not letting him go in the summer. The Polish forward has now scored four goals in five competitive games for Bayern with three of them the crucial winner. Bayern’s backup Sandro Wagner is a good striker but would not be capable of replacing Lewandowski should he go out.

Robben and Ribery cannot be replaced

Also not replaceable are Robben and Ribery. Robben was excellent on the weekend against Bayer Leverkusen and once again on Wednesday against Benfica. The Dutch winger made two key passes and created three chances to be a constant threat for Benfica’s backline.

On the other wing Frank Ribéry also showed little signs of his advancing age. The Frenchman laughed off comments by kicker that many suspected that his style of play would mean that his career would mean that he could not play into advanced age. “I want to play until I am 38,” Ribéry responded. Given his current form, it is hard to imagine Bayern playing without Ribéry. 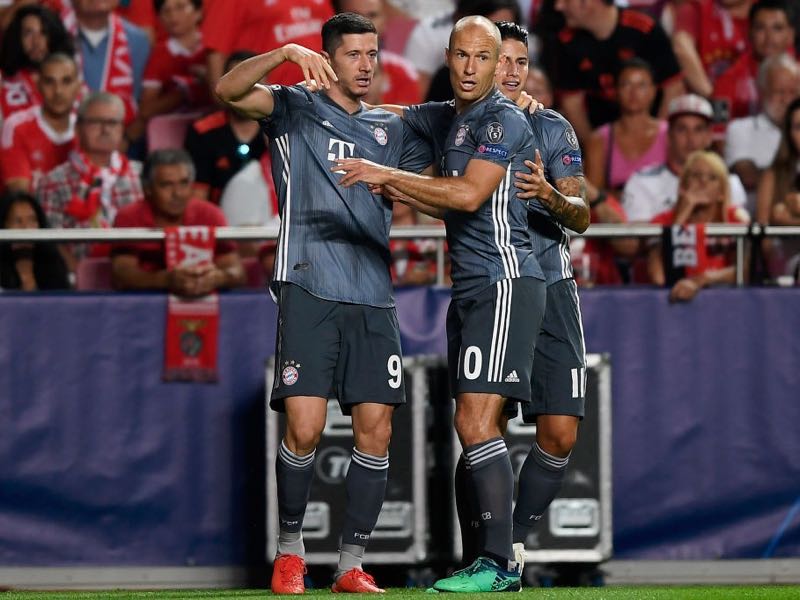 Both wingers seem almost irreplaceable at the moment. With Kingsley Coman out injured, Serge Gnabry still looking for his form and Alphonso Davies not coming in until the winter Bayern appear a little thin on either wing. But with Ribéry and Robben not having played a major tournament this summer, there is hope that the two can be in top form for most of the season.

Bayern might be down to just 16 healthy field players, but the performance against Benfica highlighted that there is still enough strength to see off 90% of the opposition Bayern face on the continent. Furthermore, even with just 16 healthy players, there is plenty of quality in this side.

Kovac even had the luxury to leave the likes of Niklas Süle, Leon Goretzka, Thomas Müller, Serge Gnabry and Sandro Wagner on the bench. Instead, James Rodríguez, who has been once again linked with a move to Real Madrid last week, was given a start and the Colombian was excellent providing the assist to Renato Sanches’ goal and completing 90.9% of his passes highlighting that Bayern have a bench that is second to none in German football and has very few competitors in Europe.

Another player, who was given a chance, was Renato Sanches. The Portuguese midfielder was signed amidst much fanfare two summers ago but has since struggled to make his mark at Bayern.

Loaned out to Swansea City last season Renato Sanches had a horrible time playing in the English Premier League. Bayern hoped that Niko Kovac would be able to rekindle Renato Sanches’ talent, but the depth in Bayern’s midfield seemed to hamper the 21-year-old after a strong start to the preseason.

As a result, there was talk that Bayern could sell Renato Sanches this summer to recuperate some of the money they had spent on him in the summer of 2016. Renato Sanches stayed, however, and was given an opportunity against his former club Benfica, which he grasped with both hands. Not only did he score Bayern’s second goal he also completed 93.6% of his passes and was a magnificent presence in Bayern’s midfield centre and rightfully was selected the Futbolgrad Network player of the match as the 21-year-old’s performance will surely give Niko Kovac some food for thought.