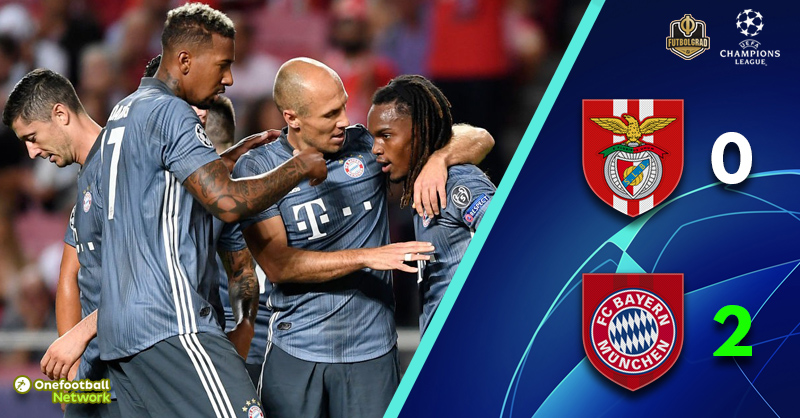 After a disappointing end to last season’s competition, it was imperative that Bayern put down an early marker on Matchday one of the Champions League. Benfica vs Bayern München would be the start of the Bavarian’s quest for a place in Madrid come May 2019.

Niko Kovac gave a start to forgotten man Renato Sanches, the 21-year-old started brightly back on familiar ground. Driving at the Benfica backline inside the opening moments there was an element of desire in his play.

Sanches set the tone and Bayern responded as a unit. With the game only 10 minutes old Franck Ribéry broke down the left and picked out Robert Lewandowski – inexplicitly left unmarked in the Benfica box.

The Polish striker duly fired the ball home as the side from Bavaria continued their excellent start to the season.

Arjen Robben should have doubled the lead three minutes later, clean through the winger could only find the hands of Vlachodimos. The Benfica ‘keeper making himself a big target that the Dutchman couldn’t find a way past.

The Portuguese side were chasing shadows for the opening quarter of the match, Bayern were attacking at will while at the back, Jérôme Boateng and Mats Hummels kept their opposing forward line in check.

One momentary lack of concentration from Hummels almost gifted Benfica a goal, Eduardo Salvio could only shank the ball high into the stand behind Manuel Neuer – the Argentine should have done much better with his clear opportunity.

As the half time whistle blew, Bayern were once again cruising – but similar to the performance against Leverkusen, they had shown errors that could be exploited, especially at a European level.

As the second half started, there was little to distinguish it from the one just finished.

Bayern attacked from the off, Benfica happy to sit back and look for a counter attack – however, it was the German side that would benefit from a wonderful break away.

Joshua Kimmich looked to have tied himself up on the edge of the Bayern box but his outlet was superbly taken down by Roben. The winger’s flick found Sanches in the middle, and the ex-Benfica player burst into life.

His darting run started the move that would finish with a standing ovation. James Rodríguez whipped the ball into the box and Sanches slid in to smash the ball home from close range.

It was a fantastic move, quite rightly it earned applause from the entire stadium – Kovac in the Bayern dugout looked especially pleased.

His mark is beginning to show on a side that look capable of once again reaching the latter stages of the competition – as a minimum. With Bayern tactically locking Benfica down it will be of concern to Kovac that the host’s only real opportunities came from some sloppy play instigated by both center backs.

Benfica vs Bayern München – Man of the Match: Renato Sanches

The Portuguese play maker hasn’t had the best of times since he joined the German champions. However, this evening he showed the desire and work ethics that earned him a move to the Allianz.

Involved from the very start of the match, his desire to repay the faith shown in him by Kovac was evident. A wonderful performance marked with a brilliant team goal the once forgotten man started, then finished.

Bayern will be keen to make the semi-final stage once again – as a minimum, and on this display many wouldn’t bet against them.  Strong at the back, controlled in the middle and potent upfront – the Bundesliga has been easy pickings for the Bavarian’s and now they have their eye on the ultimate prize, the UEFA Champions League.