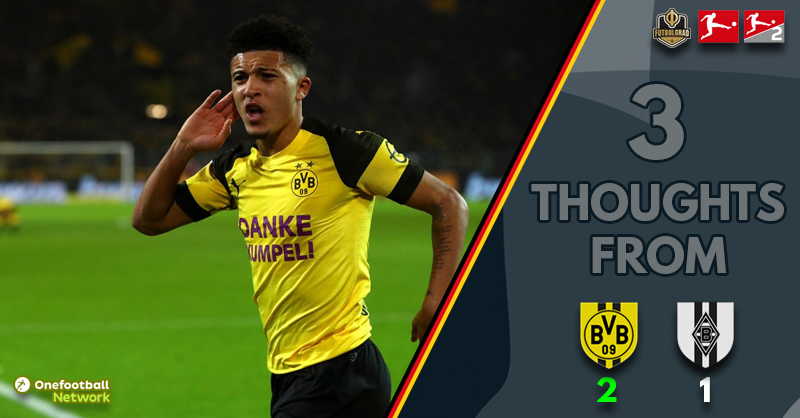 Borussia Dortmund v Gladbach was defined by injuries to both defensive lines, and many expected that this game would turn into a goal-fest. But instead, Dortmund were clinical completely shutting out Gladbach in what was a dominant display.

Dortmund respond well to their first defeat of the season

How would Dortmund respond to the surprise defeat to Fortuna Düsseldorf? The answer is well. Despite their injury crisis in the back Dortmund were rock solid in defence and were perhaps a bit unlucky that Kramer’s goal was given.

“In the second half, it was a battle of wills. Gladbach did very well to play out of the back, and it was hard to press. But we managed, and that was excellent,” Marco Reus told the German station ZDF after the game.

It might have been hard work on the pitch. But Dortmund looked in control for almost the entire second 45 minutes. In fact, it was almost complete dominance over the entire 90 minutes, and it was only thanks to a slapstick goal by Christoph Kramer that Gladbach were in the match until the very end.

That goal, in particular, was hotly debated and even though it was checked by VAR, it looked like Kramer benefitted by controlling the ball by his hands. That, in turn, should have been enough to chalk the goal off. But Dortmund reacted well to having conceded and were then in control in what was good character win.

Both sides had defensive problems going into the match. Gladbach were without Nico Elvedi, and Matthias Ginter and Dortmund lost Abdou Diallo and Manuel Akanji mid-week.

Lucien Favre reacted by fielding Ömer Toprak and Julian Weigl in the back. Weigl, nominally a holding midfielder, did well in defence controlling the game from the back almost like a libero. The 23-year-old had 65 touches and completed 92.9% of his passes. He also won four out of his six duels for a solid performance. 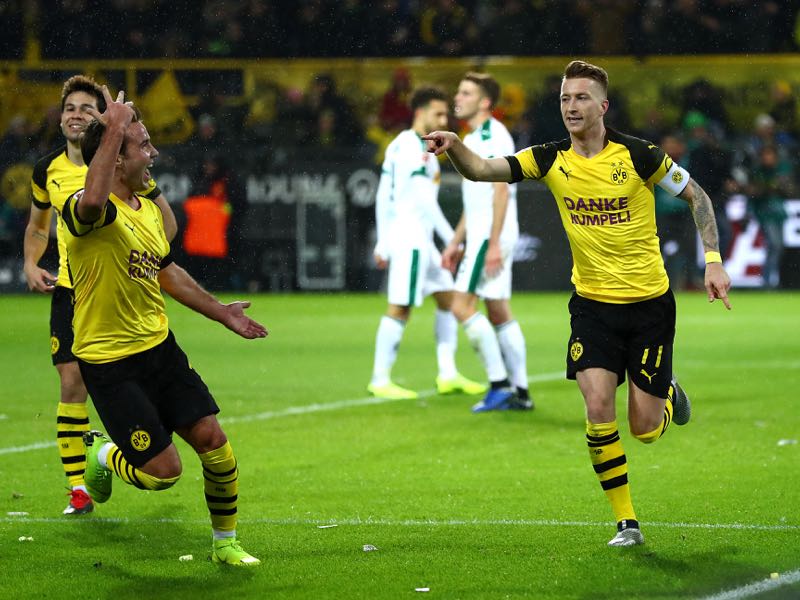 “Altogether we showed almost a perfect performance in defence despite the injury problems,” Michael Zorc told the media after the game.

Gladbach’s Dieter Hecking also had to experiment. He started Louis Beyer and Tobias Strobl in defence. The 18-year-old Beyer will have to shoulder the blame to miss out on a critical pass ahead of Dortmund’s first goal of the game. The teenager was almost inconsolable following the goal but quickly got himself together for the remainder of the game.

“The opponent is the measurement-stick and for me the absolute favourites to win the title,” Hecking said about Dortmund after the game. With this in mind, his Foals did alright in defence but had to perhaps sacrifice their attacking prowess in the process.

The title Dortmund’s to lose?

The Black and Yellows now head into the break with at least a six-point cushion over rivals Bayern, who have a difficult challenge at the Commerzbank Arena in Frankfurt tomorrow. Bayern face a major test against Eintracht Frankfurt knowing full well that should the gap grow back to nine points it might be simply too much to overcome.

“Everyone wants to win the German championship, that is why we play football. It is still a long season, and the last game [against Düsseldorf] showed that we still have plenty to do. But I am proud of the team they gave everything tonight,” Reus said after the game in an interview with the German station ZDF.

“A performance like the one against Düsseldorf can’t happen. We are ambitious enough to know that, they stood deep, which is something we struggled with all season and played one ball forward to beat us,” Reus explained. Much will depend on Dortmund to find solutions against defensive-minded opponents when it comes to the title challenge down the road.

Another aspect is Marco Reus. The forward has been the player of the season in the Bundesliga thus far but in the past has often been stopped by injuries. “When you are not healthy you can’t perform, and you are not having fun playing football,” Reus explains.

A healthy Reus and decoding teams that play deep defensive football will be the key for Dortmund’s first championship since 2012.

Loading...
Newer Post
Bayern more efficient as they brush aside Frankfurt in an edgy affair
Older Post
Dortmund rebound and beat Gladbach in the battle of the Borussias