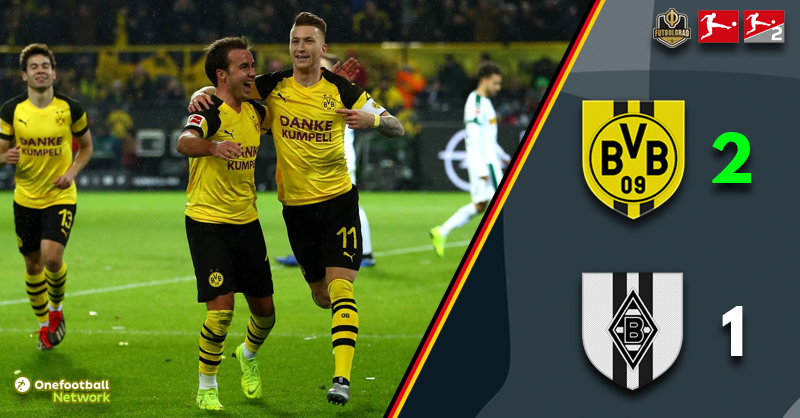 Dortmund rebound and beat Gladbach in the battle of the Borussias

Dortmund v Gladbach was defined by injuries to both defensive lines, and many expected that this game would turn into a goal-fest. But instead, Dortmund were clinical completely shutting out Gladbach in what was a dominant display.

Dortmund put a very high press on Gladbach right from the beginning of the match. Despite that pressure, however, the Foals tried to combine their way out of the back, which led to some close calls as goalkeeper Yann Sommer and his backline struggled with the press.

Gladbach were almost under siege at the early stage. But the backline held and when Dortmund did finally break through in the 20′ minute Sommer made a fantastic save on Marco Reus, who had broken clean through into the penalty box and tested the keeper with a shot from just eight-yards out.

The Black and Yellows were seemingly in control but could not find a way through. On top of that Dortmund suffered a huge blow around the 30′ minute mark when Paco Alcacer had to go off with a hamstring problem.

Without Paco Alcacer only struggled for about ten minutes. In fact, Gladbach finally started to venture forward and right away got punished. Raphaël Guerreiro won the ball deep in his half and sent Reus off to the races. The German national team player broke into the box laid the ball off to Mario Götze, he, in turn, spotted Jadon Sancho and the Englishman pulled off a piece of magic to beat Sommer with a low shot from an impossible angle.

Unbelievably Gladbach was able to respond right away. A high cross from the right saw two Dortmund defenders crash into each other and Christoph Kramer breaking forward was able to wrestle the ball across the line. The goal was checked by VAR as Kramer had handled the ball, but Felix Zwayer was told that it was a natural hand position and the goal stood.

Dortmund came out of the tea break with plenty of steam. In the 47′ minute had their first chance of the second interval when Guerreiro saw a shot blocked inside the six-yard box. Not that Dortmund had to wait long for their second goal.

Once again Sancho was one of the main protagonists. In the 55′ minute the Englishman instigated an attack on the right, cut to the centre, which left Götze exposed on the right, Sancho played the ball back to the right and Götze, in turn, centred the ball on setting up Reus for Dortmund’s second goal.

In the 65′ minute, Marco Reus almost sealed it. Götze was brought down just outside the box, and Reus curved the ball over the top of the wall and had Sommer beat, but the keeper was rescued by the post. Dortmund seemed threatening every time they went forward at this stage but could not find that third goal.

And what about Gladbach? The Foals were in a bit of a catch-22 situation. Opening up the back and going on the attack would have opened the floodgates at this point, on the other hand, Gladbach needed an equaliser.

Around the 80′ minute mark Gladbach wanted to become more adventurous, but every time Gladbach seemed to get a grip of the match Dortmund asserted their dominance once again by controlling the ball almost at will. Reus, in fact, had the next big chance of the game after Götze won the ball on the edge of the box and while falling stuck the ball to Reus, who broke through but Sommer had read the play well and took the ball off Reus’ feet.

Desperation time arrived in the 90′ minute for Borussia Mönchengladbach. But the Foals could not get a foot in the door as Dortmund were excellent in shutting out the Borussia from Gladbach.

It was perceived a major blow when Paco Alcacer had to come off in the first half with what appeared to be a hamstring injury. But Mario Götze came on and had an instant impact. His hard work inside the box set up Jadon Sancho’s first goal and his fantastic cross in the second half set up Marco Reus for the winner. Götze was a constant threat whenever he received the ball with the back to the goal opening up attacking channels for the likes of Reus as the former wunderkind is being slowly transformed into a holding number 9 by head coach Lucien Favre. 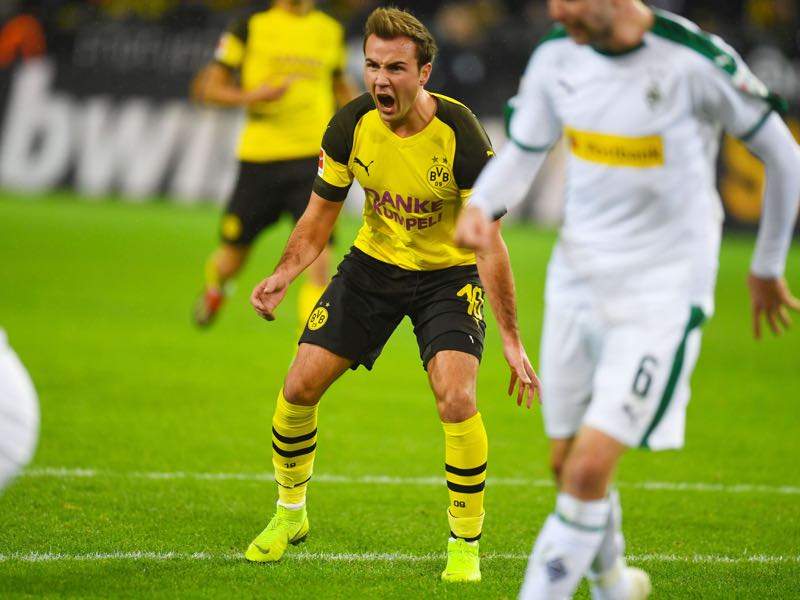 How would Dortmund respond to the surprise defeat to Fortuna Düsseldorf? The answer is well. Despite their injury crisis in the back Dortmund were rock solid in defence and were perhaps a bit unlucky that Kramer’s goal was given. The Black and Yellows now head into the break with at least a six-point cushion over rivals Bayern, who have a difficult challenge at the Commerzbank Arena in Frankfurt tomorrow.

Loading...
Newer Post
Dortmund rebound with makeshift defence to put pressure back on Bayern – Thoughts from BVB v Gladbach
Older Post
What to expect from Eastern Europe’s football clubs in the Europa League?