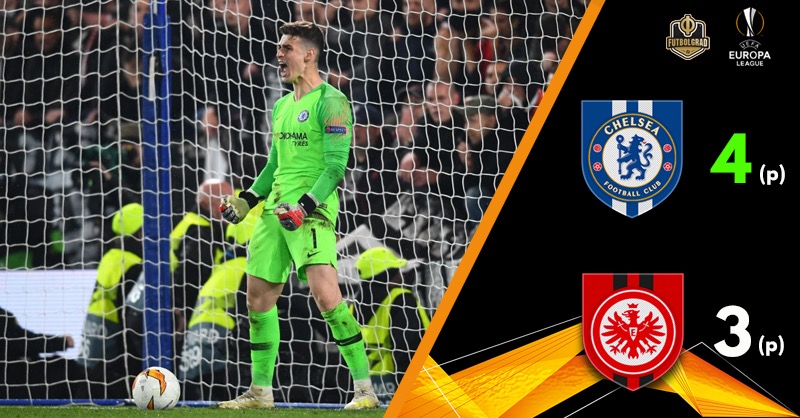 Chelsea break Eintracht Frankfurt’s heart and advance to the final

Chelsea v Eintracht Frankfurt went all the way in what was an intense game at Stamford Bridge. In the end, Chelsea squeezed through on penalties providing a massive heartache to the many thousand Frankfurt supporters that had travelled to London.

Frankfurt attempted to draw first blood with Luka Jović forcing a save from Kepa in the 5′ minute with a header following a corner.  Meanwhile, Chelsea should have been perhaps awarded a penalty in the 11′ after Ruben Loftus-Cheek was brought down in the box by Danny da Costa.

Da Costa then on the other end almost scored the opener. The right wing-back unleashed a great volley in the 14′ minute, and Kepa had to do well to tip the ball over the crossbar.

Kevin Trapp, in the meantime, had to stand tall on the other end when Olivier Giroud popped up inside the six-yard box in 22′ minute. Two minutes later Makoto Hasebe spectacularly cleared a ball off the line following a freekick cross by Eden Hazard.

Chelsea were the better team at this stage and in the 28′ minute took the lead. Ruben Loftus-Cheek broke through on the right, opened up his body and then curled the ball past Trapp to make it 1-0.

The Blues were good for their lead and could have built on it before halftime. In the 40′ Jorginho won a ball deep in Chelsea’s half quickly played the ball forward to Hazard, who spotted Loftus-Cheek in the middle, his shot, however, rolled past the near post.

Just after halftime, Frankfurt equalised. Makoto Hasebe spotted Luka Jović; he chested the ball down to Mijat Gaćinović, the attacking midfielder played the ball straight back to Jović, who had continued his forward run into the box to make it 1-1.

Frankfurt’s goal gave the Eagles some confidence. Gaćinović (58′) saw a shot stopped by Kepa and Kostić (60′) saw his shot go wide. The Eagles were now the more dominant of the two sides during this stage of the game.

Instead, Chelsea almost squeaked through a lucky second. In the 77′ minute Trapp mishandled a shot by Davide Zappacosta, who had to come on for the injured Andreas Christensen, but nobody managed to jump on the rebound letting Frankfurt off the hook.

Then Chelsea were lucky that they were allowed to finish the game with 11-man. Cesar Azpilicueta two-footed challenge against Gaćinović, however, only earned the captain a yellow card. Shortly after in the 86′ minute Giroud tested Trapp with a shot from just outside the box.

The tension was now intense as both sides were looking for the winner. But even a last-minute corner went just wide, and the game had to go into extra-time.

There is nothing tenser than extra-time. In the 100′ minute, Frankfurt thought they had scored the winner. A cross from the left found Sebastien Haller, his dropkick, however, lacked power allowing David Luiz to rush back and spectacularly clear the ball off the line. Just before halftime of extra time, Haller was unlucky once again when Zappacosta cleared a header following a corner off the line.

Chelsea finally had their first chance of extra-time in the 111′ minute. Emerson tanked his way from the right into the box and unleashed a hammer of a shot that Trapp could not handle, Martin Hinteregger, however, launched in to clear the ball.

Then Trapp had to make a fantastic save from a Zappacosta shot in the 115′ minute and then was lucky that an Azpilicueta goal was ruled off after he had pushed the ball home after the goalkeeper had the ball under control.

It was one of the few moments that the noise at Stamford Bridge rose a few decibels, the rest of the time there was a silence that came with anticipation. The question at that point was whether one side could find the winner or if the game needed penalties to be decided, which in the end was the case.

Five shooters each had to determine the outcome, and in the end, Martin Hinteregger and Gonçalo Paciência were the tragic heroes for Frankfurt. Although Azpilicueta had missed his penalty first, both saw their shots stopped by goalkeeper Kepa and in the end, Chelsea advanced thanks to a 5-4 win after penalties.

Martin Hinteregger was the man of the match. The Eintracht Frankfurt defender was immense, standing tall like an Austrian Oak blocking attack after attack thrown at him by Chelsea’s immensely talented attack. But in the end, Hinteregger was somewhat the tragic hero, stepping up to take the fourth penalty that would have given Frankfurt an immense advantage the Austrian’s shot failed to squeeze through Kepa’s legs. Despite the penalty, however, there is no doubt that he was the best player on the pitch tonight. 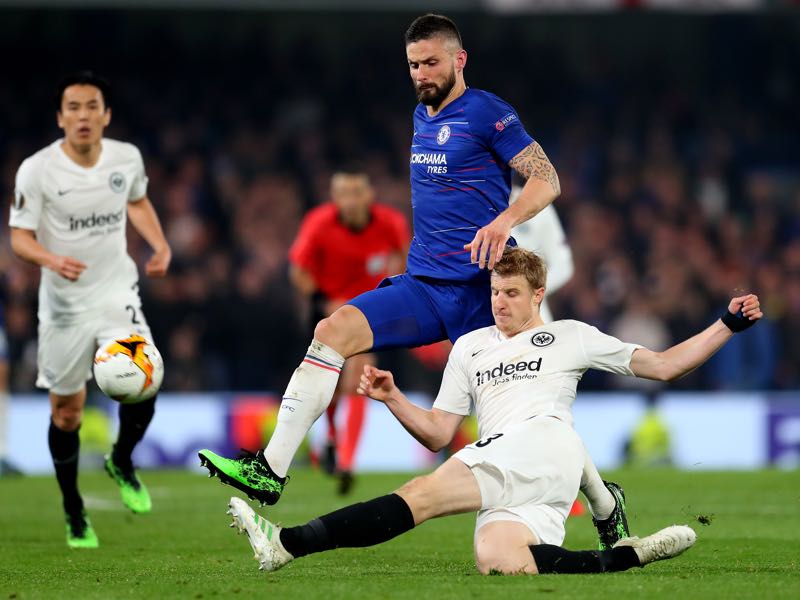 It was not meant to be for the Eagles. As a club, Eintracht Frankfurt, like no other, embraced this competition. Thousands travelled with the club around Europe to roar the Eagles almost all the way to Baku. In the end, one penalty made the difference between Frankfurt going all the way or not.