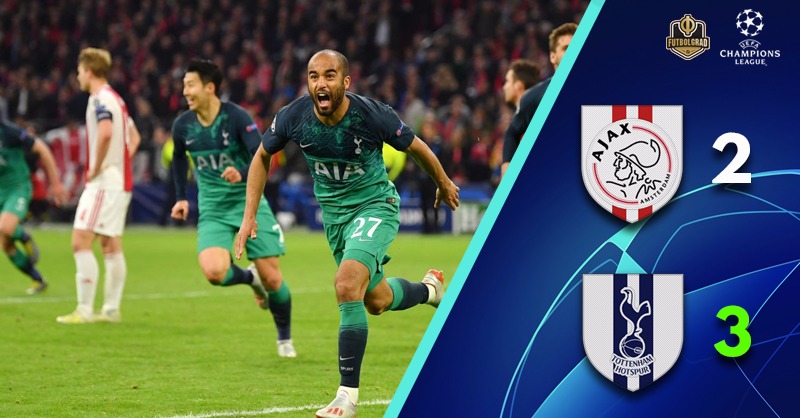 Ajax v Tottenham was a spectacle of football, a true advertisement of the game that provided the sort of drama that football fans love. Ajax controlled the first 45 minutes, but then Tottenham mounted the sort of comeback that we have not seen since last night.

It was instant pressure by Ajax as the De Godezonen scored within the first five minutes. The Amsterdammers easily played the ball around the box and won an early corner, which captain Matthijs de Ligt easily headed home.

The goal woke Tottenham up. In the 7′ Heung-min Son found room on the right, and his low cross-turned shot hit the near post of André Onana’s goal then in the 9′ Dele Alli saw a curled effort go just wide.

Although Ajax were in control of the match playing the ball nicely within their ranks. Spurs created the majority of the chances at this stage. Son (23′) broke through Ajax’s defence and was kept out by Onana, who also had to be on guard one minute later when Christian Eriksen found room to unleash a shot inside the box.

On the other end, Dusan Tadić could have possibly ended it in the 31′ minute when he just missed the goal by a few inches. But it would not matter because in the 36′ minute Hakim Ziyech would seal it with a wonder goal following a great combination inside Tottenham’s box.

Could Tottenham mount a comeback? They most certainly tried and in the first moments of the second interval put the pressure on the Dutch side and Onana had to come up with a massive save to keep Alli from scoring with a close-range dropkick in the 54′ minute.

What followed were four extra-ordinary minutes. In the 55′ minute, Ajax had a freekick deep in Tottenham’s half but needlessly gave the ball away that resulted in a Spurs counter-attack that resulted with Lucas Moura scoring with a low shot inside the box.

Then in the 59′ minute, Tottenham equalised. First, Fernando Llorente was denied by another big Onana stop, but Ajax’s defence could not clear the situation, and the ball eventually ended up with Moura, who scored his second of the night to get Spurs back into the game.

For 15 minutes Ajax had switched off, and they were punished for it. What followed was a wide-open match in which both sides were looking for the next goal. Ziyech missed a big opportunity in the 64′ and going straight back the other way De Ligt blocked Llorente inside the box.

It was all in a fine balance with the game ebbing and flowing back and forward. Tottenham, however, were the more dominant side and at one stage during the second half had 69% possession. But Ajax had the biggest chance at this stage when Ziyech hit the post with a shot from the edge of the box in the 79′ minute.

Instead, the game got the sort of ending it deserved. A frantic ten minutes that were wide open in which the balance could swing either way. Tottenham saw the ball cleared off the line twice in the 87′ minute with Llorente and Jan Vertonghen missing the opportunity to see their side go through.

Tottenham tried everything at this stage and with a final corner to be played Lloris joined the Spurs’ attack. The goal finally arrived with the final ball of the game. Once again it was Luca Moura, who was the hero. The striker was given just an inch in the box, and that was enough to beat Onana with a low drive in the 95′ minute.

Lucas Moura was the man of the match. The Brazilian striker not only scored the unlikely game-winner in the final minute of the match but also scored two goals within 204 seconds to get Tottenham back into this game in the first place. 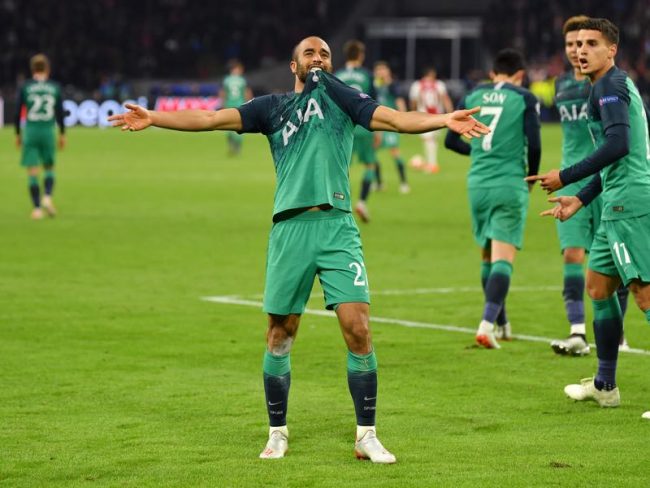 Lucas Moura of Tottenham Hotspur celebrates after scoring his team’s third goal during the UEFA Champions League Semi Final second leg match between Ajax and Tottenham Hotspur at the Johan Cruyff Arena on May 08, 2019 in Amsterdam, Netherlands. (Photo by Dan Mullan/Getty Images )

It was another action packed match in the UEFA Champions League. Furthermore, it was another huge comeback by an English side in this competition. Although favoured on money and talent going into this tie Spurs seemed to have bottled it in the first leg and in the first 45 minutes. But this side never gave up and in the dying second found a way back in it. On balance, it was deserved but going by the balance of power it was no surprise.