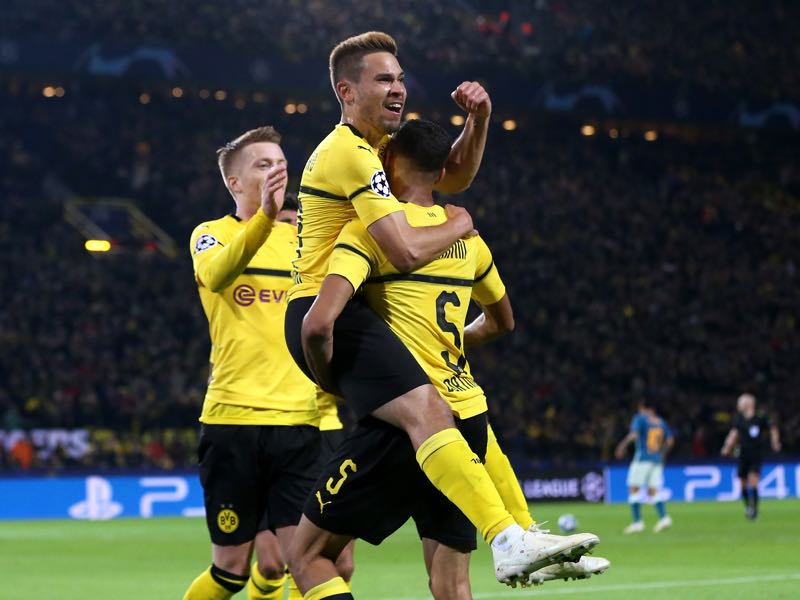 Dortmund v Atletico Madrid was the clash of giants in the Champions League Group A. Both sides went into this match with each having won their opening two games and knew that they could make a decisive step towards the round of 16. For Dortmund, it was also deemed a test of character, a test of character the Yellow and Blacks passed with flying colours.

It was a measured start by both sides with Dortmund and Atlético probing one another during the opening stages. At that stage it was fascinating to see the different approaches taking place – whereas BVB tried to dissect their opponents carefully, Atlético tried aggressively push forward.

Dortmund’s approach produced the first chance in the 21′ minute. Circulating the ball around the box the ball landed at Axel Witsel‘s feet, and the Belgium striker unleashed a low drive forcing Atlético keeper Jan Oblak into making a diving save. Borussia Dortmund were dangerous every time they broke forward at that early stage.

In the 31’ minute, Achraf Hakimi, who had made several forward runs, used his speed to run at Atlético’s midfield, taking on two defenders, he managed to get the ball through to Christian Pulisic, his curled effort, however, ended up missing the goal. Known for their patient approach under head coach Lucien Favre Dortmund tended to pass the ball around the box looking for that one opening that would get them on the board.

That goal arrived in the 39′ minute. Pulisic ran at Atleti’s defence with some speed and managed to get the ball to the left to Hakimi; the Moroccan wing-back played the ball back to the centre to Witsel. The Belgian took the shot from 20-yards out hit defender Atletico defender Lucas Hernandez whose deflection opened the scoring. In the 41′ minute Dan-Axel Zagadou could have doubled it, but his header after a corner was wide keeping Atlético in the match.

The Spaniards then came out of the dressing room roaring. Pressuring Dortmund deep into their half Saul Niguez had the biggest chance in the 49′ minute but his shot from 18-yards, following an Atleti corner, zipped past Roman Bürki’s goal. Saul then also had the next two chances. In the 51′ minute his curled effort from the edge of the box hit the crossbar and then in the 56′ minute Bürki had to be on guard to stop another shot from the edge of the box.

It was a real test of character for Dortmund in the opening stage of the second half against a furious Atlético Madrid side. It was a character test that Dortmund seemed to pass and in the 66′ minute should have doubled the lead. Reus broke through Atletico’s defence and was just one step away from scoring when Reus’ teammate Hakimi got away just before the German international was about to pull the trigger.

Hakimi had ruined the chance, but the young wing-back made up for his mistake. In the 73′ minute Mahmoud Dahoud sprung lose Hakimi on the left, who played a fantastic pass into the centre where Raphaël Guerreiro was left wide open to tap home Dortmund’s second.

Atlético Madrid did not give up, however. In the 78′ minute, Diego Godin joined an attack and laid off the ball to Angel Correira whose shot hit the post. Godin, in particular, pushed up far at this stage and in the 80′ minute was once again as he worked the ball once again to Correira and this time the striker hit the side netting.

Instead, Dortmund added a third. Mario Götze won the ball in his half, and once again it was Hakimi who was unleashed, the Moroccan international found himself going one-on-one with Jan Oblak, but instead of trying to score himself he laid the ball off to Jadon Sancho. The Englishman made no mistake to score Dortmund’s third in the 83′ minute.

Then with just moments to go Dortmund capped it off with a fourth goal. Atleti defender Felipe Luis played a catastrophic pass across his penalty box that found Dortmund’s Guerreiro wide open and the Portuguese midfielder made no mistake to score his second from just 16 yards out. The goal capped off a fantastic performance by Borussia Dortmund, who withstood some significant pressure to walk away with a deserved lead.

Achraf Hakimi was the man of the match. The wing-backs only mistake was to deny Marco Reus to score Dortmund’s second in the 66′ minute. In that situation, the Moroccan national team player might have been a bit too eager, but it was the only negative touch in an outstanding performance. Defensively, Hakimi was solid shutting down Atlético’s right flank, and offensively Hakimi was involved in three of Dortmund’s four goals. 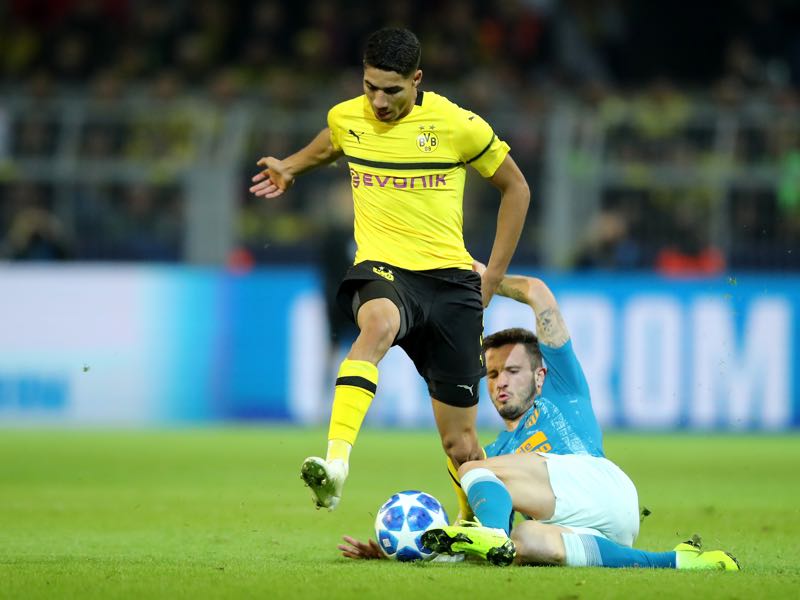 Dortmund have passed the character test. Atlético pressed Dortmund aggressively in the first 15 minutes of the second half and had several chances to equalise the score. Dortmund needed to dig in at that point and withstand the pressure. They did precisely that and around the hour mark were able to free themselves and eventually walked away with a comfortable 4-0 victory.