It was an expected heated Rheinderby between Fortuna Düsseldorf and 1.FC Köln. Small fouls caused several interruptions, which meant that there was a lack of flow to the game. As a result, there were very few chances, Erik Thommy missing the biggest for Fortuna when his header from close-range was off the target in the 26th minute. Finally, in the 38th minute, a run by Alfredo Morales produced the first goal. The American was brought down in the box and Rouwen Hennings stepped up to score the opening goal of the game.

Down a goal, Köln started to take more risks going forward and, as a result, started to create more opportunities. First Louis Schaub missed a header in the 58th minute and then Zack Steffen saved a shot by Simon Terodde in the 60th minute. Instead, Thommy would score for Fortuna, the midfielder keeping a cool head on his 50-yard breakaway dash. It was the final goal of a game that was heated both on and off the pitch. 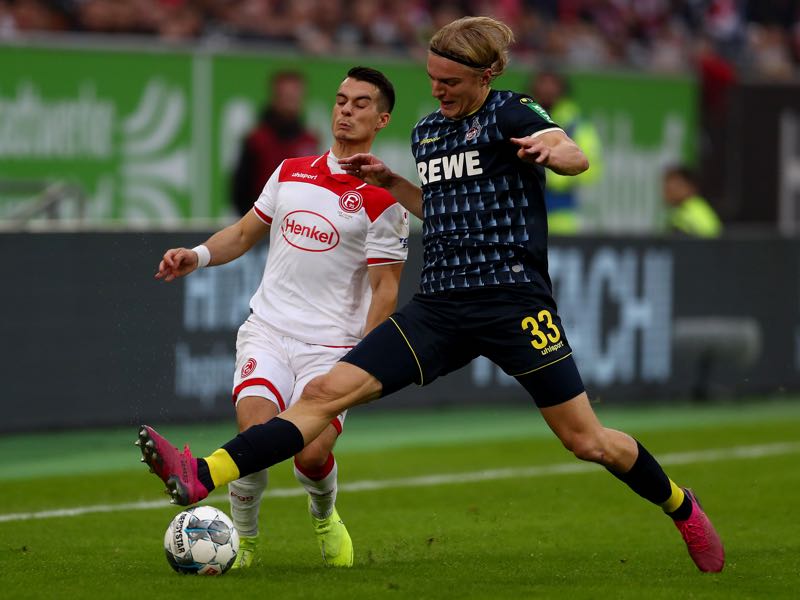 Düsseldorf v Köln – Erik Thommy of Duesseldorf is challenged by Sebastiaan Bornauw of Koeln during the Bundesliga match between Fortuna Duesseldorf and 1. FC Koeln at Merkur Spiel-Arena on November 03, 2019 in Duesseldorf, Germany. (Photo by Lars Baron/Bongarts/Getty Images)

The winger had an excellent game for Fortuna Düsseldorf. Despite being hacked at throughout the game by Köln’s relentless defenders, the winger always found a way through and scored a stunning goal to seal Fortuna’s victory.

Ayhan had a good game. The 24-year-old defender kept his side together when Köln were pressing for the equaliser. It was also his pass in the 61st minute that led to Thommy’s goal.

The only 1.FC Köln player in normal form today.  Playing in central midfield Hector tried to calm the game down when Fortuna were pressing. Ultimately the national team player could not prevent Köln’s latest defeat in the league.

The pressure on Köln head coach Achim Beierlorzer will increase after this result. Köln fans chanted, “we are fed up” after Thommy’s goal. Köln fans also kept lighting flares, creating a smokey atmosphere for what was a heated derby both on and off the pitch.

With the Billy Goats dropping to 17th spot there is a chance that we will soon witness the first coaching change of the season. Fortuna, in the meantime, are celebrating a massive derby win that takes the club to 13th spot in the standings.