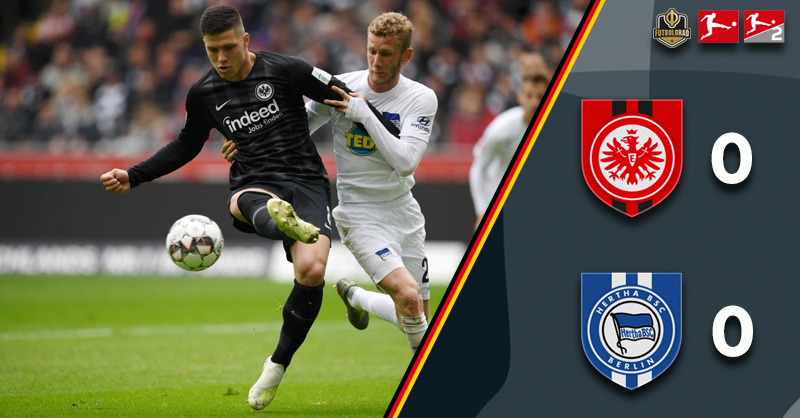 Eintracht Frankfurt vs Hertha Berlin – The Eagles were held to a 0-0 draw by Hertha at the Commerzbank-Arena in a hard-fought and even Bundesliga contest. Jonathan de Guzmán spurned Frankfurt’s best chances with Kevin Trapp pulling off a fine save to deny Per Skjelbred at the death.

Hertha Berlin started the brightest through a Salomon Kalou break that put Eintracht on notice. Marvin Plattenhardt’s long ball then found Max Mittelstädt who crossed to Vedad Ibesevic who saw his shot blocked.

Ibisevic turned provider as he released Ondrej Duda into space but Frankfurt defenders David Abraham and Martin Hinteregger got back to thwart the threat. Ante Rebic had a decent effort spilt by Rune Jarstein but the visitors soon got back on top.

Duda’s fierce shot forced Kevin Trapp to tip the ball over the bar but Hertha’s best chance would come in the 28th minute. Lazaro robbed Hinteregger in a dangerous position and freed Lukas Klünter with a clever backheel, his cross finding Ibisevic who headed wide at the back post.

Filip Kostic, Rebic and Jovic were trying hard to combine as Jovic dragged an effort well wide. The striker was involved soon after forcing a foul from Lukas Klünter who was shown the first caution of the match.

Eintracht finished the first half strong, Jovic’s free-kick falling to Rebic who saw his shot saved before turning provider. The Croatian picked out Jonathan de Guzmán who fired his volley over from close range in Frankfurt’s best chance of the half.

Gelson Fernandes was replaced by Lucas Torró at the break but it was Hertha who came out firing. Kalou set up Per Skjelbred who shot over the bar before Karim Rekik’s effort was turned around the post by Trapp.

Adi Hütter made his second switch in the 62nd minute as Jetro Willems replaced Sebastian Rode, Pal Dardai responding by bringing on Davie Selke for Ibisevic and Javairo Dilrosun for Lazaro. Frankfurt then had two chances to break the deadlock from De Guzman.

His first effort was a weak attempt at Rune Jarstein, his second a shot way over the bar after some nice work from Willems. Hütter and Dardai made their final substitutions as De Guzman was replaced by Gonçalo Paciência and Matthew Leckie came on for Ondrej Duda.

Eintracht were given a lifeline in the 80th minute with Klünter dismissed for a second booking. They couldn’t make it count however despite numerous crosses into the box. Trapp was then on hand and came up big to deny Skjelbred who had raced through on goal.

Abraham had the last chance of the game as he headed a Kostic’s free-kick at Jarstein but it was too little too late.

Frankfurt continue to miss Sebastien Haller up front and Mijat Gacinovic’s absence was significant with Rebic and Haller often isolated in attack. They would be forgiven for having an eye on Chelsea in the UEFA Europa League semi-finals but needed all three points.

Credit to Hertha Berlin who battled hard and deserved the point. They have little to play for but pride with three games remaining after another end of season slump.

Makoto Hasebe was yet again a standout performer for Eintracht Frankfurt. (Photo by Juergen Schwarz/Bongarts/Getty Images)

Makoto Hasebe held Frankfurt’s defence together and was often the right man in the right place at the right time.

Despite coming up against bigger and stronger opponents, the Japanese veteran used his guile and positioning to help his side keep a clean sheet.

Eintracht still have Champions League destiny in their own hands but, they are making it tough for themselves.

A home defeat against Augsburg followed by two draws against Wolfsburg and Hertha have allowed Borussia Mönchengladbach, Bayer Leverkusen and Hoffenheim to close the gap.