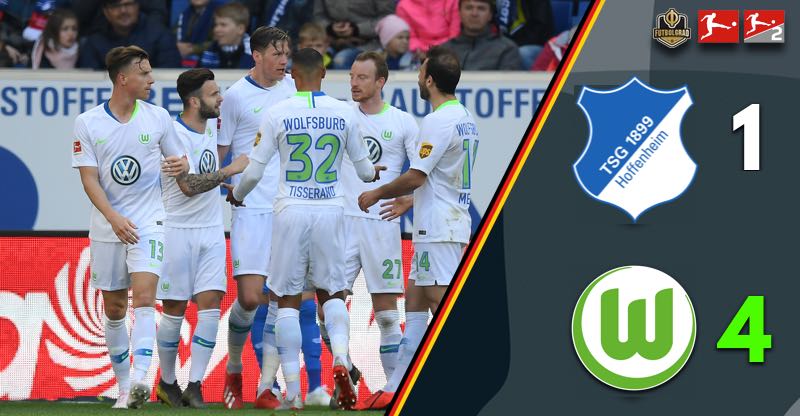 Hoffenheim stumble over Wolfsburg in their pursuit for Europe

Hoffenheim v Wolfsburg — Wolfsburg pulled off an impressive 4-1 win against Hoffenheim at the PreZero Arena to keep their European dreams alive. Adam Szalai put the hosts in front early on, but Andrej Kramaric hit the post from the penalty spot that would have made it 2-0. The Wolves fought back and equalised through William before half-time, going on with the job in the second half through a Wout Weghorst brace and Max Arnold strike.

The match started with attacking intent from both teams, Nico Schulz hitting a tame effort at Pavao Pervan before Oliver Baumann saved Admir Mehmedi’s shot and tipped a long-range Felix Klaus thunderbolt off the woodwork.

Ishak Belfodil headed an Andrej Kramaric corner over the bar before firing wide after build-up play from Nadiem Amiri and Kramaric. Some sloppy turnovers from Wolfsburg invited pressure, and it wasn’t long until Hoffenheim took advantage.

Another fast break saw Kramaric release Schulz, the left wing-back crossing to Adam Szalai who scored from close range. It should have been 2-0 minutes later from the penalty spot.

A Kramaric cross saw Belfodil get in front of Sebastian Jung, his shot tipped off the bar by Pervan, but Schulz fouled in the following play. After consulting VAR, referee Deniz Aytekin awarded a penalty, but Kramaric failed to convert with his shot bouncing off the post,

Wolfsburg were not going to lie down with Felix Klaus setting up Robin Knoche in close range who forced a good save from Baumann. Mehmedi then shot just wide before Max Arnold cut through and fired a fierce shot at Baumann who punched it away.

The visitors scored a deserved equaliser just before half-time, a cross falling to an unmarked William who curled the ball into the top corner which gave Baumann little chance.

The second half was Wolfsburg start with positive intent without creating goal scoring opportunities. Julian Nagelsmann replaced a furious Nadiem Amiri with Leonardo Bittencourt in the 56th minute, Bruno Labbadia responding with Sebastian Jung making way for Renato Steffen who came on at left back.

Joshua Guilavogui initiated a fast break with Steffen streaking away; his cross returned to an unmarked Guilavogui who got in a tangle and couldn’t fire off a shot. Kramaric provided two opportunities for Szalai and Adams who both headed wide, but Wolfsburg would soon be in front.

William’s deep cross sailed over Adams to Wout Weghorst who headed straight at Baumann who spilt the ball that found its way over the line. Kramaric set up another opportunity for Hoffenheim, but Ermin Bicakcic headed straight at Pervan.

Reiss Nelson replaced Bicakcic in the 73rd minute before Kramaric was provider once more, his cross finding Bittencourt who headed a weak effort at Pervan. Labbadia brought on Elvis Rexhbecaj and Yunus Malli for Klaus and Mehmedi in an attempt to see the game out.

Malli was immediately involved and decided to go for glory in the box with an unmarked Weghorst screaming for the ball. It mattered little as Arnold raced clear and beat Baumann at his near post, a disappointing display from the keeper who had been so strong in the first half.

Rexhbecaj was next to have a chance for Wolfsburg with his shot forcing Baumann to parry the ball back into danger. There was still time to make it 4-1, however, some terrible Hoffenheim defending see Arnold race clear and deliver a pinpoint cross to Weghorst who finished from close range.

Hoffenheim vs Wolfsburg – Man of the Match

Wout Weghorst scored two and assisted Max Arnold’s goal, but William gets my vote for playing a hand in Wolfsburg’s first two goals. A curling effort beat Baumann for the equaliser before his cross found Weghorst at the back post for the go-ahead goal.

Often defensively challenged and susceptible at the back, William’s efforts helped turn the game. The Brazilian filled played at left back before switching back to the right-hand side after Steffen replaced Jung. 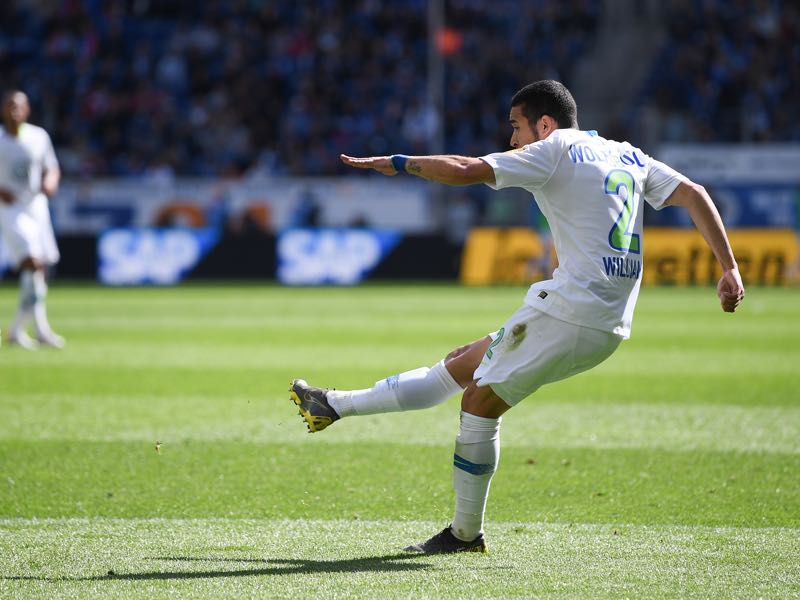 Hoffenheim v Wolfsburg – William of Wolfsburg scores his team’s first goal during the Bundesliga match between TSG 1899 Hoffenheim and VfL Wolfsburg at PreZero-Arena on April 28, 2019 in Sinsheim, Germany. (Photo by Matthias Hangst/Bongarts/Getty Images)

Hoffenheim’s four-match winning streak was snapped at home in a result not many saw coming. Julian Nagelsmann’s side had a great opportunity to move one point behind Eintracht Frankfurt and now have a must-win game at Borussia Monchengladbach next week.