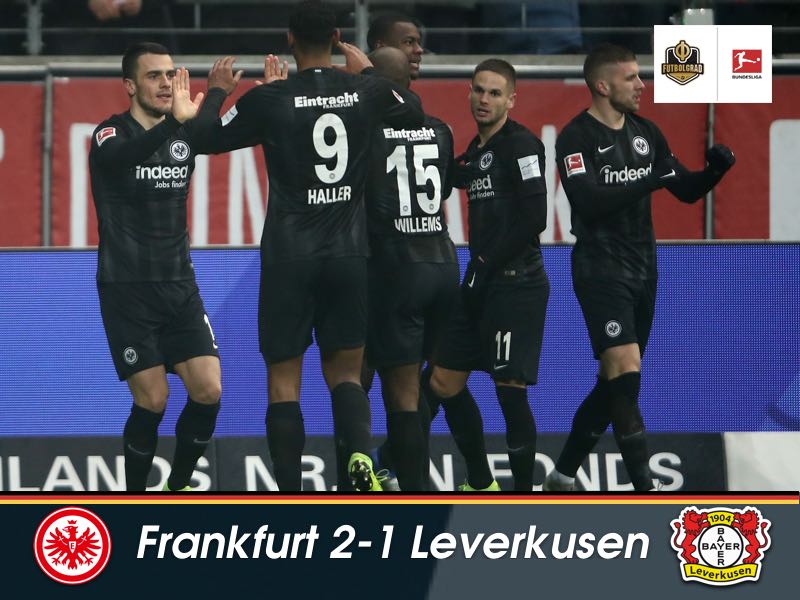 Frankfurt collect all three points in a plucky affair against Leverkusen

Frankfurt v Leverkusen saw two teams return to Bundesliga action after their respective European adventures. Eintracht Frankfurt beat Lazio midweek to win six out of six UEL games and Bayer Leverkusen beat AEK Larnaca 5-1 to win their group. Tonight, however, Frankfurt had the better of the game beating Leverkusen in what was a highly entertaining affair between two physical sides.

Ante Rebić produced the first chance straight from kickoff in the 1′ minute. The Croatian forward managed to go one-v-one with Bayer keeper Lukas Hradecky but instead of looking for the shot himself passed the ball to Sebastien Haller allowing Tin Jedvaj to clear the ball.

Leverkusen, in the meantime, produced their first chance in the 11′ minute. Kevin Volland was left open following a corner and managed to unleash a shot that hit the turned around Simon Falette on his arm. Referee Felix Brych quickly consulted VAR but then waved the play to go on.

It was a wide-open game now which left Frankfurt a bit stretched in defence. Julian Brandt had the next two chances. In the 14′ and the 17′ minute Brandt went one-v-one with Kevin Trapp and both times his efforts were parried away by the keeper. Then in the 18′ minute, Karim Bellarabi appeared to have scored with a volley from outside the box after a corner but Aleksandar Dragović had impeded Trapp’s view from an offside position and Brych, after consulting VAR, waved the goal off.

Instead, Eintracht Frankfurt took the lead in the 28′ minute. Filip Kostić was given to much room on the left and his cross was met in the centre by Danny da Costa, who easily managed to tap the ball across the line from just four yards out. Frankfurt had further chances to put this game to bed. In the 40′ minute, Rebić laid of a shot to Sebastien Haller but his shot was stopped by Hradecky.

The first 45 minutes were hectic with both sides playing a physical style of football in which Frankfurt just about had the better of the match. It was a battle that was both physical and technical and both teams were willing to carry that approach into the second half.

It was a style that seemed to suit the die Adler better. Because in the 56′ minute Frankfurt had doubled the lead. Da Costa broke forward and managed to play the ball to the right to Haller, he, in turn, spotted Kostić’s run to the centre and the Serbian backheeled the ball past Hradecky to make it 2-0.

How would Leverkusen react? Die Werkself remained calm and in the 64′ minute got one back. In fact, in many ways, their goal by Bellarabi was overdue as the Leverkusen winger managed to beat Trapp with a low drive from the right corner of the box after a great pass by Leon Bailey.

That goal opened up the game even more. Leverkusen head coach Heiko Herrlich had now sacrificed one of his holding midfielders, which meant that Bayer were now pressing up higher but also gave Frankfurt the room to counter.

With the extra room, Rebić should have settled it for Frankfurt in the 80′ minute. Given to much room in the attacking third the Croatian went one-v-one with Hradecky and the goalkeeper managed to redirect the shot over the crossbar.

On the other side, Kevin Volland almost found the equaliser in the 90′ minute when a long cross found him completely unmarked inside the six-yard box but Trapp spread out and was able to keep the ball out. It was a breathless affair in the dying moments. Luka Jović, going the other way, saw a ball go just past the far post after going breaking away from Leverkusen’s defence. It was the final chance of a game that could have easily seen another two or three goals.

Filip Kostić was the man of the match. The Serbian winger scored what turned out to be the winner in the 56′ minute. Somewhat re-invented by head coach Adi Hütter Kostić now fulfils more of a wing-back role in a 3-4-1-2 setup. As a result, his goalscoring output has been somewhat reduced – this was his first goal of the season – nonetheless, the winger remains dangerous whenever he does go forward and tonight showed that has not lost his goalscoring touch completely. 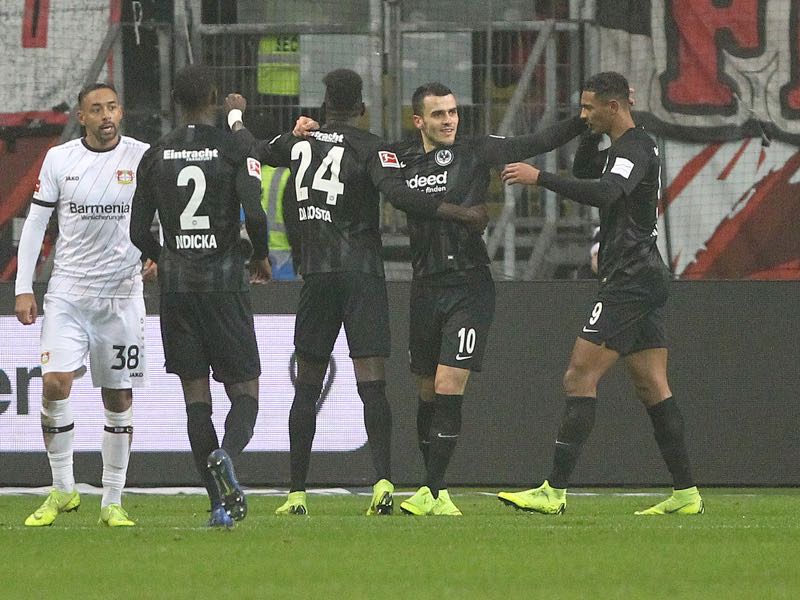 Frankfurt and Leverkusen produced what at times felt like a hockey game. It was a back and forward affair with plenty of physical elements. Leverkusen had 53% of the possession but Frankfurt dominated with 17 to 12 shots. The difference between the two sides was the number of big chances created – here Frankfurt led with five to one chances. Frankfurt also had 13 shots inside the box in comparison with Leverkusen’s seven. Small margins that showed the difference between two sides that invested much and in which die Adler were just a tad better.