Borussia Mönchengladbach were on the back foot in the early exchanges, Stefan Lainer picking up an early booking and Fortuna threatening from free-kicks. The visitors took the lead in the 7th minute through a deep cross to Andre Hoffmann, the big defender heading across to Kasim Adams who headed the ball off the underside of the crossbar and just over the line. Breel Embolo had a shot saved from a tight angle, but the Swiss striker would soon get more opportunities. Sent straight through on goal, Embolo saw his initial shot saved by Zach Steffen with the United States’ keeper making another save on the follow-up. László Bénes and Florian Neuhaus had efforts blocked, Lainer playing with fire after a foul on Zimmer in the middle of the pitch. Düsseldorf went close to making it 2-0, Lewis Baker releasing Jean Zimmer who cut inside with Matthias Ginter making a crucial block.

Dawid Kownacki forced a save from Yan Sommer after a poor touch from Patrick Herrmann, Bénes setting up Ginter at the other end but his header was saved by Steffen. Adams was having a great battle with Embolo, pushing over the striker in the box that warranted a VAR intervention. We will never know if it a penalty would have been given, referee Christian Dingert ruling that Embolo was offside in the build-up after consulting the touchline monitor. The home support were feeling slightly anxious at half-time with Thursday’s 4-0 Europa League defeat by Wolfsberg still fresh in their memories.

The second half began with Neuhaus breaking clear on the counter in a three on two situation, he was taken down by Matthias Zimmermann before he could find an open teammate. A nasty collision from a Gladbach corner saw Tony Jantschke injured and replaced by Nico Elvedi. The hosts should have equalised in the 54th minute, Oscar Wendt’s cross finding an unmarked Herrmann with Zack Steffen saving what looked to be a certain goal. Lewis Baker was having another strong game, working tirelessly at both ends of the pitch but he was exhausted and replaced by Erik Thommy. Herrmann created a chance for Plea, but he couldn’t connect on the cross, Herrmann presented with another glorious chance but heading wide from close range. Borussia Mönchengladbach squandered another fast break opportunity with some sloppy passing as the game opened up.

Kaan Ayhan took a yellow card for his team after a foul on Pléa with both managers making switches; Jean Zimmer replaced by Thomas Pledl and Marcus Thuram on for Pléa. Herrmann and Bénes had opportunities, but it would be one of the substitutes, who was about to have an immediate impact. In the 74thminute Stefan Lainer raced down the right wins, his cross finding Marcus Thuram who got in front of Ayhan and finished from close range. Both managers made their final substitutions in the 80thminute with Rouwen Hennings coming on for Dawid Kownacki and Raffael replacing Herrmann.

Both sides were pressing for a winner, and it was Mönchengladbach that came up trumps. An incredible scramble in the box saw Raffael’s shot cannon back off the cross bar, Ginter’s header slapped away by Steffen and Thuram’s follow up allowed after a VAR intervention. Ayhan was lucky to stay on the pitch, bringing down Raffael after the Brazilian had gone on a slaloming run. Raffael took the free-kick that was punched away by Steffen, Karaman shot over with the final chance of the match, but this was Marcus Thuram’s day after just 23 minutes of action. 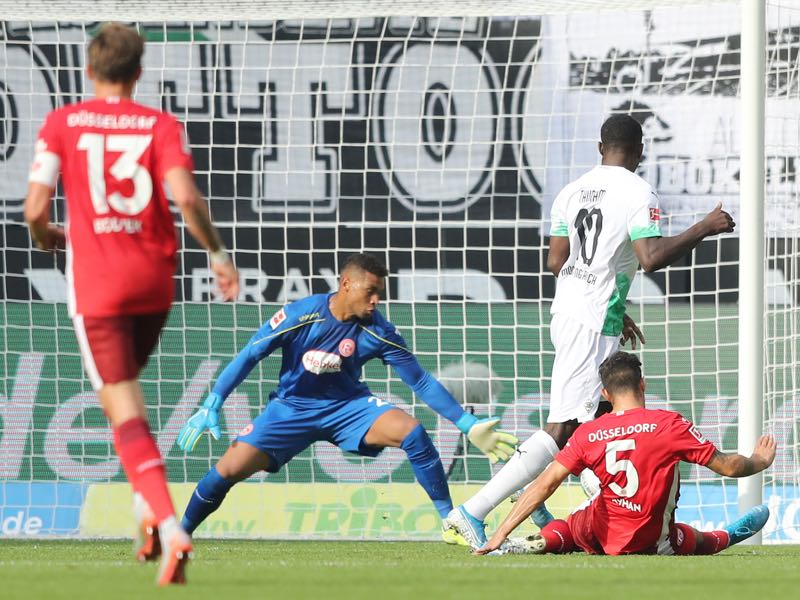 Marcus Thuram of Mönchengladbach (2nd R) scores the first goal during the Bundesliga match between Borussia Moenchengladbach and Fortuna Duesseldorf at Borussia-Park on September 22, 2019 in Moenchengladbach, Germany. (Photo by Christof Koepsel/Bongarts/Getty Images)

Came off the bench in the 67thminute and took seven minutes to get his side level, getting into position ahead of Ayhan and finishing off Lainer’s cross. Produced a smart left-footed volley from a tight angle to give Gladbach all three points.

Bénes has come from nowhere to be an important player for Marco Rose. The 22-year-old has great vision and passing ability, releasing teammates into attacking positions and taking almost every set piece.

Continues to impress and made some smart saves to deny Embolo and Herrmann and keep his team in the game. Could do little about the equaliser and had already stopped Ginter’s header before Thuram scored the winner.