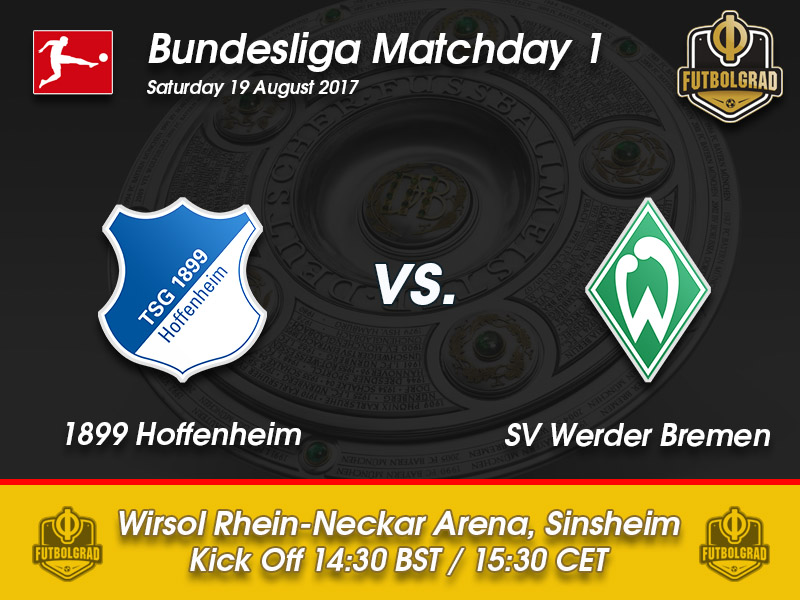 Welcome to the Hoffenheim v Werder Bremen minute by minute report from the Wirsol Rhein-Neckar-Arena in Sinsheim. The Futbolgrad Network‘s Chris Williams is live on location in what promises to be a highly entertaining match on the opening weekend of the 2017/18 Bundesliga season. 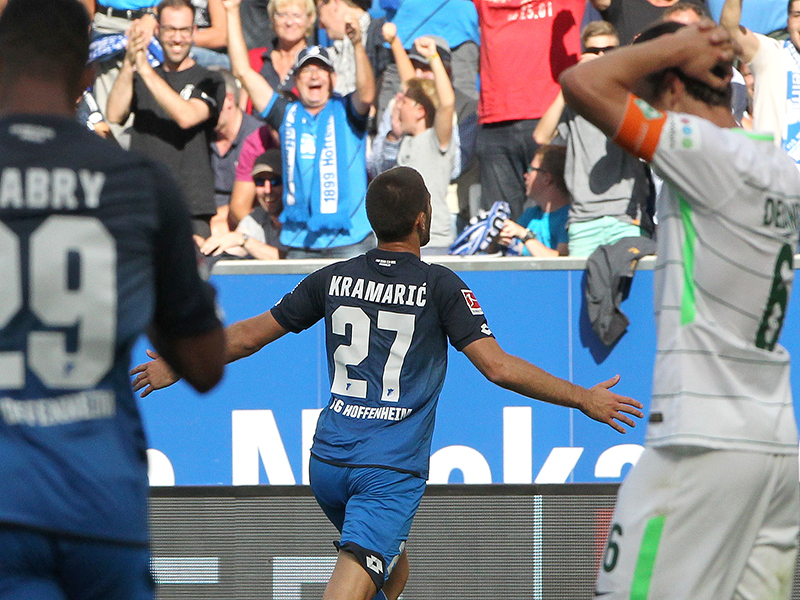 Hoffenheim’s Croatian forward Andrej Kramaric celebrates as he scores, what turns out to be, the winning goal against Werder Bremen. (DANIEL ROLAND/AFP/Getty Images)

We’re into three minutes of added time, can TSG hold on..?

It seems as if Kramaric has been credited with the goal.! Dubious, it was going well wide.!

Substitue Kramaric shoots from distance and the ball cannons off Bauer into the goal – TSG take the lead 1:0

Julian Nagelmann screams instructions at his team – they were guilty of picking up too many draws last season. 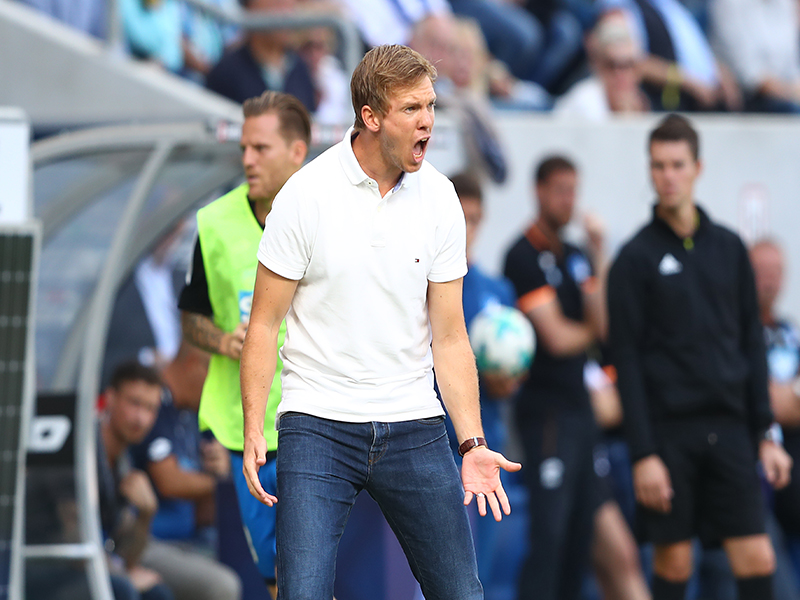 Ten minutes left for someone to find a break through. One goal surely wins this, can either side nick it in the closing stages?

TSG with a glorious chance — the ball is fizzed across the box but no player can get hold of it, it goes inches wide.

Bremen make another change — On comes Gondorf, off goes Bartels

A mixup at the back for Werder almost gifts TSG with a golden chance. Gebre Selassie ducked out the way of the ball and Pavlenka just watched it roll past him. A lapse of concentration for Bremen.

More Substitutions — Kainz leaves the field, still unsure how he missed the opportunity in the first half!

TSG bring on Gnabry for Uth, their second substitution of the match.

First substitution of the match – Andrej Kramaric comes on for Nadiem Amiri.

TSG again go close, Szalai with possession inside the box but he can’t find a blue shirt. A goal is coming, I can smell it.!!

TSG think they’ve scored, Demirbay celebrates but the referee says no, the ball must have been inches from a goal. Herr Winkmann holds his watch up for all to see, the whole of the ball didn’t cross the line.

Now it’s Werder’s turn to pin TSG into their own half. A tame shot doesn’t threaten Oliver Baumann though. It’s a stalemate still here in Sinsheim.

Zuber breaks dow the left and wins a corner, TSG have Bremen pinned in for the moment.

Florian Kainz, with smart bit of skill wins himself a free kick 23 yards out. He picks himself up and smashes the ball against the TSG wall.

We’re back underway, the game needs a goal, I need a goal. Lets hope we get a few..!

Second Half Kick Off: (TSG)

Half Time Around the Grounds.!

Dortmund with a great first half and HSV also with their season off to a good start. Everywhere else, we’re 0:0

Not many goals to talk about at the break… Time for some opening-day heroics in the second half 🙏 pic.twitter.com/iAbLZFZYRn

Both sides can be happy with their opening first 45 minutes — however, both coaches will want to see their players give a little more in the way of quality. Kainz missed a glorious opportunity to put Bremen clear, he missed and we go in all square at the break. 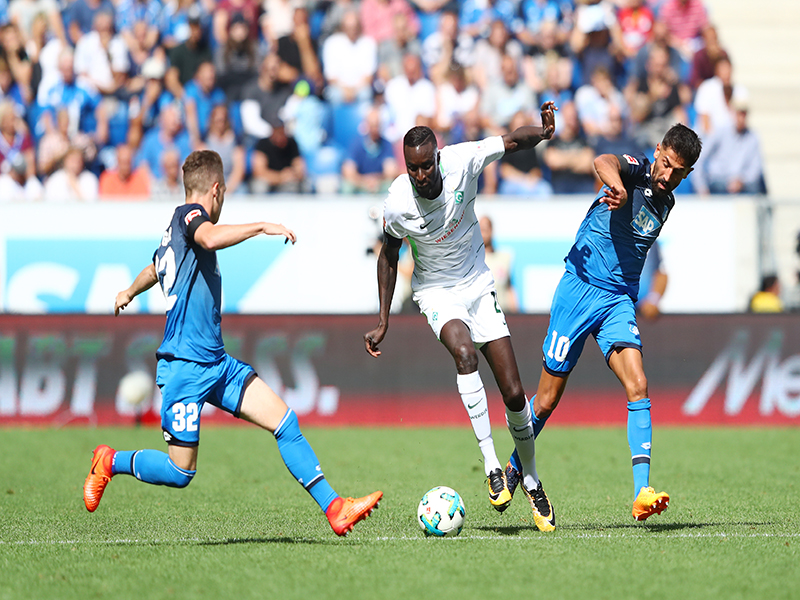 0:0 as we go into the break at Sinsheim (Photo by Alexander Hassenstein/Bongarts/Getty Images)

Six minutes until the break — After a fiery start TSG have been pegged back by Bremen, a draw is just about fair with neither side dominating.

Delaney finds space on the left hand side of the box, he shoots and Baumann makes a great save to tip it behind.

The free kick is whipped in, TSG just about clear, Gebre Selassie has the ball pinched off his toe just as he was about to shoot

Maximilian Eggestein is brought down on the edge of the TSG box, Bremen have a free kick in a good position

Half an hour gone, it’s been an entertaining first 30 minutes, it should be 1:1 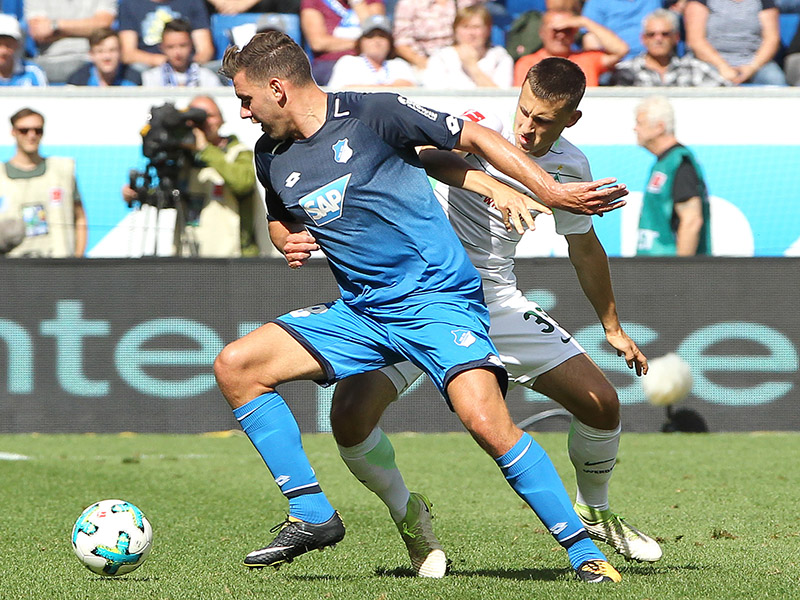 Werder break well and with pace, they get a corner. The ball comes in and Gebre Selassie can only steer the ball over

First yellow card of the afternoon goes to Bauer after a late challenge.

Szalai makes himself some space inside the 18 yard box, he looks for the far right corner but the ball sails wide of the Bremen post.

Delaney goes down in the box under a challenge from Nordtveit, he looks to the referee, who isn’t interested in the slightest

Half the stadium think the ball is in, from the corner it’s Nordtveit who heads into the side netting, it’s just wide though — time for some to sit back down.

Vogt is looking to go forward at every occasion, the captain starts a move that ends in the second TSG corner

Werder have ridden the early storm, the side from Bremen now finding more possesion

Zuber finds some space on the edge of the Werder box, it’s a tame shot in the end — no problem for Pavlenka

After some smart interplay on the edge of the box Uth plays Demirbay clean through, he shoots over the bar – we should be talking about a goal, it’s a wasted opportunity.

TSG have the first corner of the game — Demirbay swings one in but it’s header way wide.

Hübner with a lack of concentration in the middle, Werder take possession but Bartels is slightly offside

TSG with all the early possession – the Rhein-Neckar is bouncing..!!!!

We have both teams out, they are ready for Matchday 1, are you? We’re minutes from kick off here in the Rhein-Neckar Arena.

The stadium is filling up — we’ve had a mixture of prematch music but we’re all here for one thing, Matchday 1. Bayern got off to a flyer last night, who will come out on top today?

Swiftly followed by TSG, who immediately go their home tribune and acknowledge their loud home support.

Werder are the first to come and and warm-up. They get a rapturous welcome from their supporters

The team news has been released, and it’s a rotated TSG — Tuesday’s Champions League qualifier vs. Liverpool has forced Julian Nagelsmann into changes:

Our first starting XI of the 2017/18 #Bundesliga season is here! #tsgsvw #werder pic.twitter.com/689ZmS2LNL

We have arrived! Join us from 13:30 BST / 14:30 CET for all the prematch build up from here inside the Wirsol Rhein-Neckar Arena