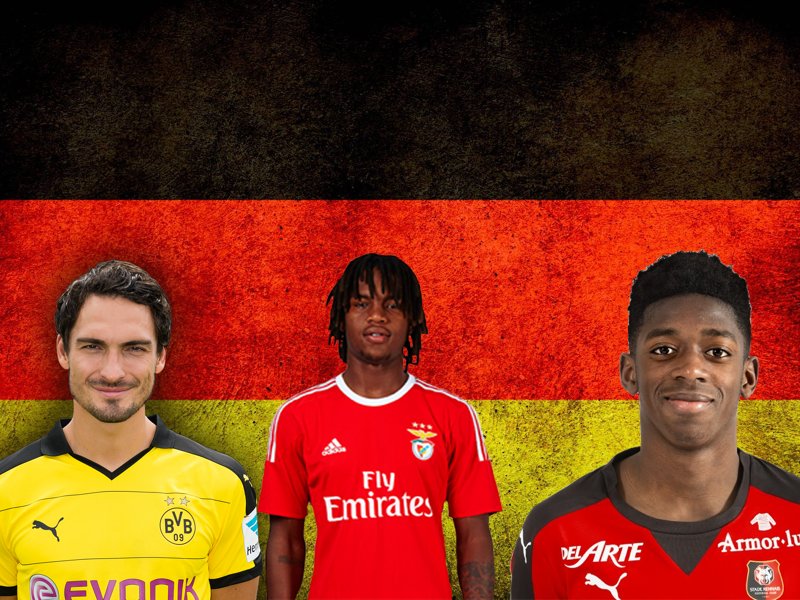 Hummels, Renato Sanches, and Dembélé – May Madness in the Bundesliga

Menino de Ouro (the Golden Boy) was the headline of the Portuguese newspaper A Bola on Wednesday morning. The paper also showed a picture of the 18-year-old Portuguese midfielder Renato Sanches as a golden statue.

On Tuesday Bayern Munich had shocked the football world, as the German club effectively concluded all of its transfer dealings six weeks before the opening of the actual transfer window. The Bavarians are paying €35 million for Renato Sanches to Benfica Lisbon, but according to the Portuguese paper Record the deal could grow to €80 million—Bayern have to pay an additional €5 million for every year in the next five years in which Sanches reaches 25 games, and also €20 million should he be voted into the FIFA World Eleven or be selected as one of the three finalists of the Ballon d’Or.

Renato Sanches Will Become the Most Expensive Teenager in the World

According to the German magazine Kicker the base sum alone makes Renato Sanches the second most expensive teenager in world football after the English wing back Luke Shaw, who was transferred for €38 million from Southampton to Manchester United in the summer of 2014. The bonus payments, however, will shatter Shaw’s record as it is likely that Sanches will reach at least 25 games in one of the next five seasons at Bayern Munich.

But the Sanches deal was just the beginning, as Bayern also brought in Borussia Dortmund captain Mats Hummels for €35 million. This deal in particular has been widely discussed in the German media, as Hummels is now the third star that the Bavarians have signed from their closest league rival in four years—the other two are Robert Lewandowski, and Mario Götze, who is now rumoured to return to Dortmund.

Indeed both transfers are a statement of intent by Germany’s biggest club, not only to their league rivals, but also to the international competition. This year the new television deal will come into affect in the English Premier League, which will guarantee the last placed team in the EPL more television money than the champion of Germany.

Hummels and Sanches – A Signal to the Global Competition

Yet constant success, and smart business practices have meant that Bayern Munich has managed to bolster its bank account over the last few decades, and is now understood to have the largest savings of any football club in the world. Although several English teams tracked both Renato Sanches, and Mats Hummels, in the end they both chose Bayern, and Germany over a transfer to England.

The deal is also a signal to the Spanish giants Real Madrid, and FC Barcelona. Indeed in Bayern’s universe only those two clubs are considered as real competition—for years Manchester United was also seen in this category, but lack of success of English teams in European competitions has meant that no English club truly belongs at the very pinnacle of world football.

The transfers are also potentially bad news for Borussia Dortmund, and the competitiveness of the Bundesliga. Yet those who view the coming Bundesliga season with pessimism should think again, as there are signs that Borussia could soon catch up with Bayern Munich.

This season the gap between Bayern and Dortmund shrank to eight points—from 33 points last season. In fact Dortmund’s 77 points in 33 matches would have been enough for first place in Spain, England, or Italy.

Borussia Dortmund is Catching Up

The Kicker also reported in their Thursday print edition that Dortmund’s coach Thomas Tuchel has never been a big fan of Mats Hummels play in the first place, as he prefers more defensive minded central backs. Hence, Dortmund will now be able to invest the €35 million earned into a new defender, who more closely fits Tuchel’s football ideology.

Also just days after losing Hummels, Dortmund managed their own transfer sensation, as the club signed Ousmane Dembélé from Stade Rennes for a reported €15 million. According to the Kicker Dembélé had offers from FC Barcelona, Arsenal, Manchester City, and FC Liverpool.

Since going almost bankrupt in 2005 Borussia Dortmund has developed into Germany’s second richest club. Furthermore, an 80,000 seat stadium, which is almost always sold out, and strategic partnerships with sponsors such as Puma and Evonik, have meant that the club has steadily grown financially in the last eleven years. Two German championships under Jürgen Klopp in 2011 and 2012, and the Champions League final in 2013 have also helped the club to grow into an internationally recognized brand.

The next step in the development for Dortmund is to ensure that Bayern, or any other club in Germany, can no longer buy the club’s biggest stars. Despite the Hummels’ transfer, this day could be close. In fact it would not be surprising if Dortmund will manage another major splash or two during this summer’s transfer window.

But for now the Dembélé transfer is a message to Bayern. The Bavarians might think in global terms when it comes to their competition. Yet continuous solid financing, Dortmund could become another German club that could soon start to defy English television money, and reach the very top of European football.

Manuel Veth is a freelance journalist, and PhD candidate at King’s College London. Originally from Munich, Manuel has lived in Amsterdam, Kyiv, Moscow, Tbilisi, London, and currently is located in Victoria BC, Canada. His thesis is entitled: “Selling the People’s Game: Football’s transition from Communism to Capitalism in the Soviet Union and its Successor States”, and will be defended in November. Follow Manuel on Twitter @homosovieticus.