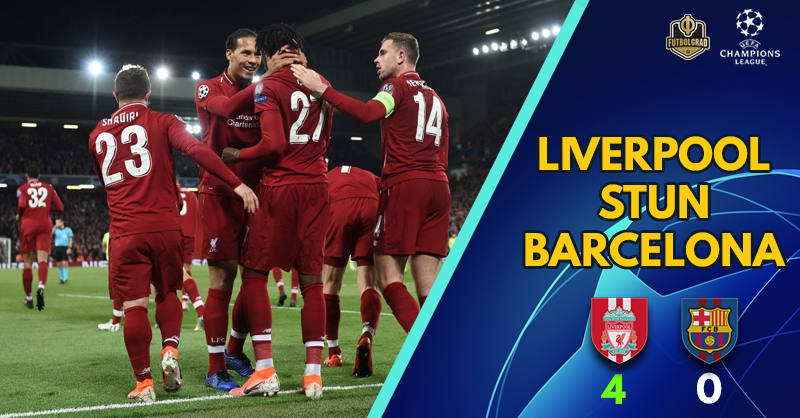 Liverpool vs Barcelona – Three-nil down from the first leg, the possibility of a positive aggregate score for the Reds looked nigh on impossible before kick-off – but yet again, Anfield delivered on an unforgettable night.

Jürgen Klopp talked pre-match about Liverpool having the chance to extend their current campaign “together with our supporters it was a long season, and there’s at least a little chance to make it longer, if not these are the last two home games of an incredible season.“

Liverpool vs Barcelona: From doubters to believers 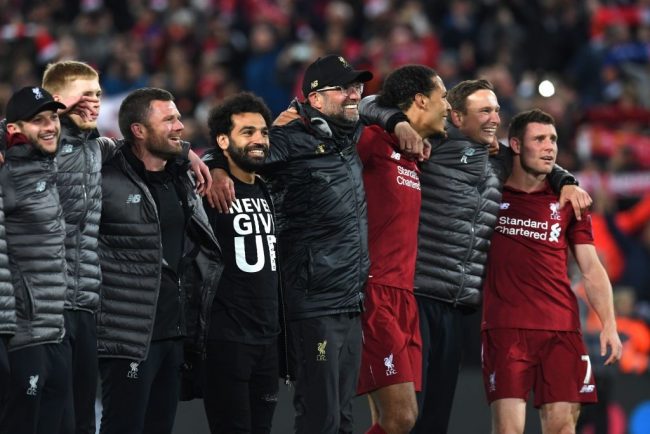 Jürgen Klopp arrived at Liverpool just over three and a half years ago, one of his main aims was to turn ‘doubters into believers’ – the German has achieved this, without question.

There were few people who gave his side a chance on Tuesday night against one of the best teams in world football, with undoubtedly – the best player of his generation in their ranks. However, despite missing two of their most influential players, Liverpool took apart Barcelona in the most effective of ways.

From the moment the old famous stadium filled up, there was no question what those there believed – they believed the impossible was possible, and they were right. Liverpool froze their opponents – helped on by the Anfield crowd, like rabbits caught in headlights Barcelona collapsed.

Klopp was asked post-match if this score could have been achieved behind closed doors – “Nope, no chance” was his answer, once again the Liverpool manager was right. Whether it was the tightness to the pitch of the crowd or the fact they made it almost impossible to hear and think at times, Barcelona were rattled.

On an evening without two of their best players, Liverpool were able to draft in 55,000 replacements – each one playing their part in a night that will live long in the memory of those who witnessed it first hand.

Liverpool vs Barcelona: Everything aligned 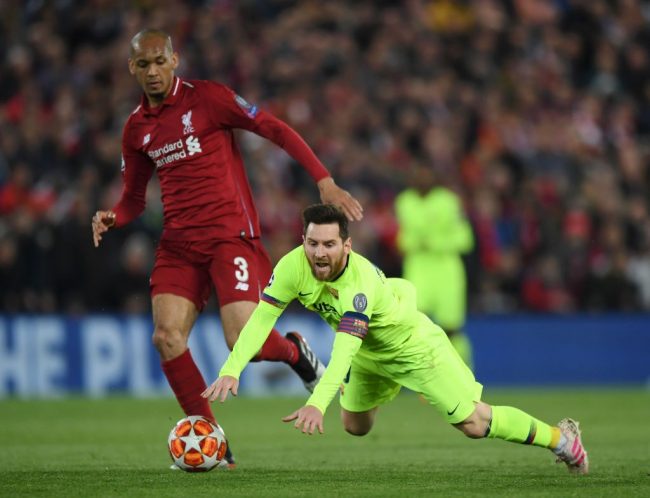 Lionel Messi will not forget Fabinho in a hurry (Photo: Shaun Botterill/Getty Images)

In order to beat one of the best sides in the world – from 3-0 down – a number of bridges have to be crossed. First, you must hope that your opposition has an off night – while your own players deliver the performance of their lives.

To say Barcelona had an off night would be unfair to Klopp and his staff. Put simply, Liverpool didn’t allow the Catalans to get into their groove. When the visitors were able to muster an attack, the Reds were equal.

Fabinho – signed in the hours after the pain of Kyiv – showed why he was brought in, Lionel Messi will not forget the Brazilian quickly. In 2010 José Mourinho instigated a ‘cage’ to nullify the five-time Ballon d’Or winner and Klopp brought something similar to this second leg.

The Argentine was left frustrated as both Fabinho and Andrew Robertson policed him to wonderful effect – the fact the former did so with the threat of a second yellow card hanging over his head for 83 minutes makes this even more remarkable.

Luis Suarez, a thorn in the Liverpool side for the entire 90 minutes in the Camp Nou was left gesticulating at every intercepted pass and fluffed opportunity. It was a nightmare return for the once lauded forward. Contrast that with Liverpool’s captain – Jordan Henderson has been a player reborn in a more forward role, this match possibly his best in a red shirt.

Liverpool might not have had as much talent on display as their guests, but their hard work and tenacity reduced Barcelona to a shadow of their ability. Klopp keeps his record of never having lost a two-legged cup tie whilst at Liverpool, it is no fluke. 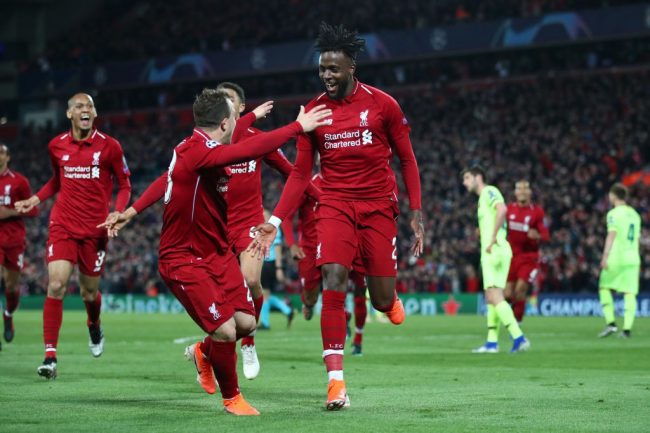 Divock Origi celebrates with his teammates as he scores Liverpool’s fourth goal during the UEFA Champions League Semi Final second leg match between Liverpool and Barcelona at Anfield on May 07, 2019 in Liverpool, England. (Photo: Clive Brunskill/Getty Images)

The Belgian has stuttered during his time on Merseyside. Flashes of brilliance have been seen, a hattrick against Southampton in 2015 one notable performance – but bar that the forward has flattered to deceive.

Not on Tuesday night though, missing two of their three main forwards there was a pressure on the 24-year-old like no other before. After seven minutes he delivered, tapping home a Marc-André ter Stegen parry – 75 minutes later he grabbed his brace after a superb piece of thinking by Trent Alexander-Arnold.

Origi had sent Liverpool to Madrid, a player surplus to requirements after a forgettable loan spell at VfL Wolfsburg had played a major part in the Reds reaching a Champions League Final.  In a season of surprises, he has netted massive goals. Everton, Newcastle and now two against Barcelona.

He may not make the starting XI in the Spanish capital, but the forward can look on and know he is an integral part of the machine that got there.

Ernesto Valverde, Manager of Barcelona looks on during the UEFA Champions League Semi Final second leg match between Liverpool and Barcelona at Anfield on May 07, 2019 in Liverpool, England. (Photo: Shaun Botterill/Getty Images)

From the moment Ernesto Valverde walked into the press conference room at Anfield he had the look of a man who would rather be on another planet than sat in the hottest of seats. Littered throughout Barcelona’s current Champions League campaign, the same question lurked like the foulest of smells – “What have you learned from Roma?”

As it transpired, nothing. The Catalan side undoubtedly came to Anfield with a game plan, but it was never on show – Liverpool didn’t let them settle into any regularity of play that could be considered a sustained threat.

From Origi’s early strike, the Spanish champions seemed to be stuck in no man’s land. Attack and try to find a goal, or sit back and soak up the pressure? It was almost impossible to tell, it was panic football and the proverbial knives will be out for a coach that should win the domestic double.

Liverpool vs Barcelona: It must be for something 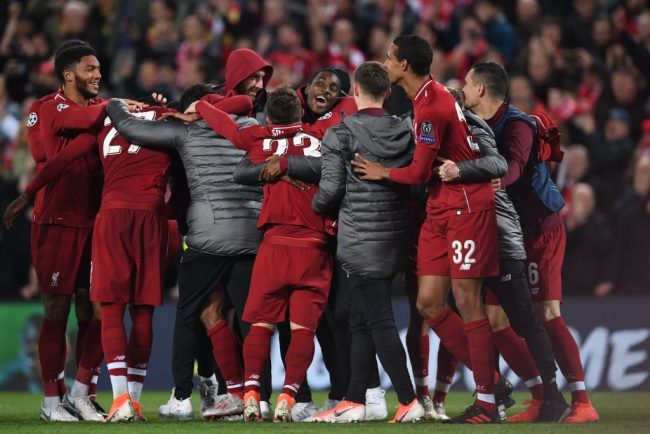 In 2016 after Liverpool’s wonderful result against Thomas Tuchel’s Dortmund in the Europa League quarter-final there was a thought that ‘all of this must be for something’. The legacy of that crazy game must be the trophy in Basel.

It never came – two years later and Liverpool once again fell at the final hurdle, this time to another Spanish side, Real Madrid. Spellbinding results against Porto, Manchester City and AS Roma paled into insignificance as the Reds failed to lift their sixth European Cup.

Tuesday’s result against Barcelona was an unforgettable one, but in order for it to live forever – like Saint-Étienne in 1977, or Chelsea in 2005 – the final must be a positive one.

Kyiv hurt this Liverpool side, as a result, they strengthed immediately after the defeat in the Ukrainian capital.

“Last year we really felt we have to go back, we cannot let it stand like this, that’s not possible. Now we get another chance, and we will go for that of course” Klopp said after the match.

In October of 2015 Klopp said that he thought in four years, a title would be delivered – Liverpool stand on the edge of two. While one may no longer be in their hands, the other is very much is.