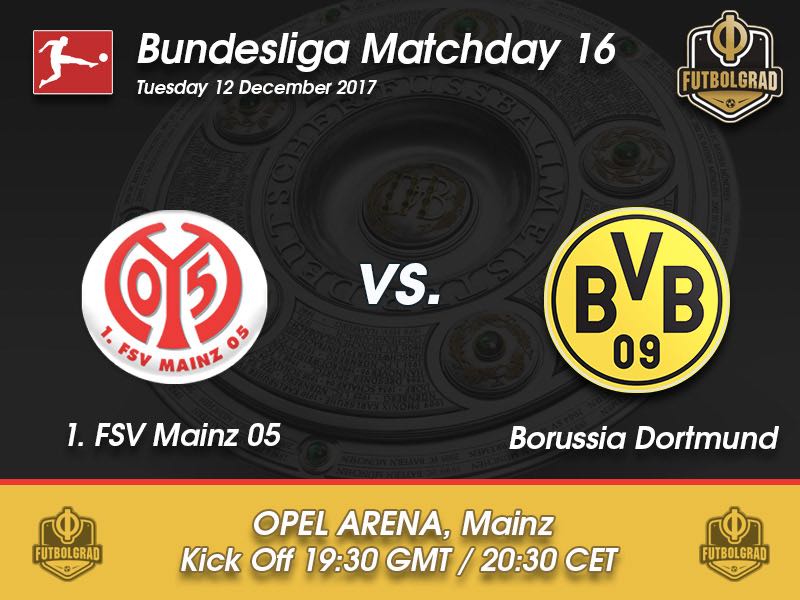 Mainz vs Borussia Dortmund will take place at the Opel Stadium in Mainz. (Photo by Simon Hofmann/Bongarts/Getty Images)

Dortmund have finally done it and fired head coach Peter Stöger following BVB’s 1-2 defeat against SV Werder Bremen on matchday 15. The result meant that Dortmund have now just won one match since September 30 in all competitions—a 5-0 victory against Magdeburg in the DFB Pokal.

Arguably Germany’s second biggest club Dortmund have been in freefall falling from the first spot to the eighth place in just two months. Perhaps the only good news is that the club remains within reach of one of the Champions League spots sitting just three points behind fourth-placed Borussia Mönchengladbach. New head coach Peter Stöger now has the task to ensure that the gap between Dortmund and the Champions League spots will not grow further until the winter break.

Left with three games—two in the league and one in the cup against Bayern—Stöger will have to hit the ground running on Tuesday night against Mainz. It is a monumental task given that he will have just two training sessions to address a mountain of issues. Furthermore, Mainz are a good side. The Karnevalsverein took Leipzig all the way on Saturday afternoon at the Red Bull Arena battling die roten Bullen to a 2-2 draw.

With this in mind observers should not expect much change to the Dortmund side that played against Werder. Instead, Stöger will likely use a similar formation and draw his conclusion for future changes from the match against Mainz. We can, therefore, expect a tightly fought game in which Dortmund should be able to secure their first three points since September finally.

Mainz vs Borussia Dortmund – Players to look out for:

Yoshinori Muto will be Mainz’s key player against RB Leipzig. The 25-year-old striker has been out of action in recent weeks with a back problem but is expected to return to Mainz’s line-up on Tuesday. A dynamic, quick and versatile forward Muto has failed to score since matchday 7, and without his scoring touch, Mainz have somewhat struggled. But to preserver against one of the best teams in Germany Mainz will be looking at Muto to lead the club on Tuesday against Borussia Dortmund.

In what has quickly turned into a troubled season for the Yellow and Blacks American wunderkind Christian Pulisic has been the only bright spot. The 19-year-old US-boy has been Dortmund’s best player all season and even when the side fell apart seemed to carry on like clockwork. With this in mind, new head coach Peter Stöger will most certainly make Pulisic the foundation on which to get Dortmund back on track.