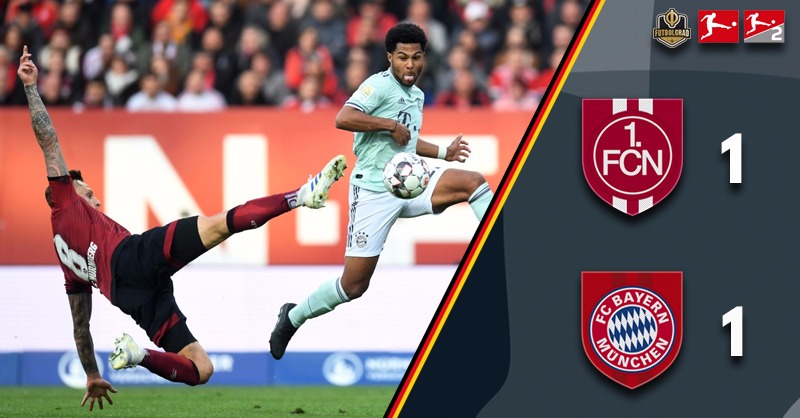 Nürnberg stop the Bayern train in its title tracks

With Borussia Dortmund stumbling in the Revierderby the attention in the Bundesliga title race shifted to Nürnberg v Bayern on Sunday. But Bayern like Dortmund managed to drop points keeping the title race wide open.

Nürnberg started the first 15 minutes well organized. Tight defensively they did not allow Bayern much room to attack and looked good when going forward.

It took Bayern until the 24′ minute to produce their first chance. David Alaba hit the underside of the crossbar with a freekick with a wonderful curled effort from 20-yards out. The Rekordmeister have failed to score a freekick all season, but they came close on this occasion.

On the other side, Matheus Pereira produced the first chance for Nürnberg in the 34′ minute, his shot, however, missed the target. Straight from that kickoff, Sven Ulreich was lucky not to be given a penalty against him, the keeper mishandled a backpass and then brought down Eduard Löwen, but referee Tobias Schieler and his refereeing team decided against awarding a penalty

The start of the second half was then delayed after Bayern ultras lid fireworks in the away block. On the pitch, there were also fireworks but this time from Nürnberg.

In the 48′ minute, Nürnberg scored. Sebastian Kerk tested Ulreich with a shot from inside the box, the keeper spilt it, and Matheus Pereira curled home the rebound to give the Club an unlikely lead.

Just minutes later Nürnberg should have had a second. In the 51′ minute Nürnberg broke forward and Löwen went one-v-one with Ulreich but instead of shooting the ball he tried to square it and Niklas Süle rushed back to clear the situation.

Bayern responded by trying to push Nürnberg deep into the defensive third. Leon Goretzka (60′) had the biggest chance to equalise at this stage but Christian Mathenia came up big to deny the midfielder, then in the 69′ Mathenia tipped a James freekick on the bar.

In the 76′ minute, Bayern finally found a way through. But not before Niko Kovac was forced to make some additional changes, James, who had only come on in the second half had to be brought off for Alphonso Davies in the 75′. Shortly after, Gnabry scored for Bayern after a brilliant cross by Kingsley Coman.

The goal was deserved at this stage. Bayern had slowly but surely closed the noose against Nürnberg and even after scoring kept the pressure up. Everyone expected Bayern to score a second and shut down the title race.

It was, however, Nürnberg that had the biggest chance to win it. In the 90′ minute Alphonso Davies elbowed Georg Margreitter in the box.

Tim Leibold stepped up, but his shot hit the inside of the post and rolled along the line and stayed out. Then going the other way in the 95′ minute, Kingsley Coman went one-v-one with Mathenia the Nürnberg keeper, however, came up with another big stop to secure a point and open up the title race once again.

Serge Gnabry was the man of the match. Left on the bench for the first half the German national team winger came on in the second half and with his runs and physicality brought some urgency to a Bayern side that struggled in the first half. 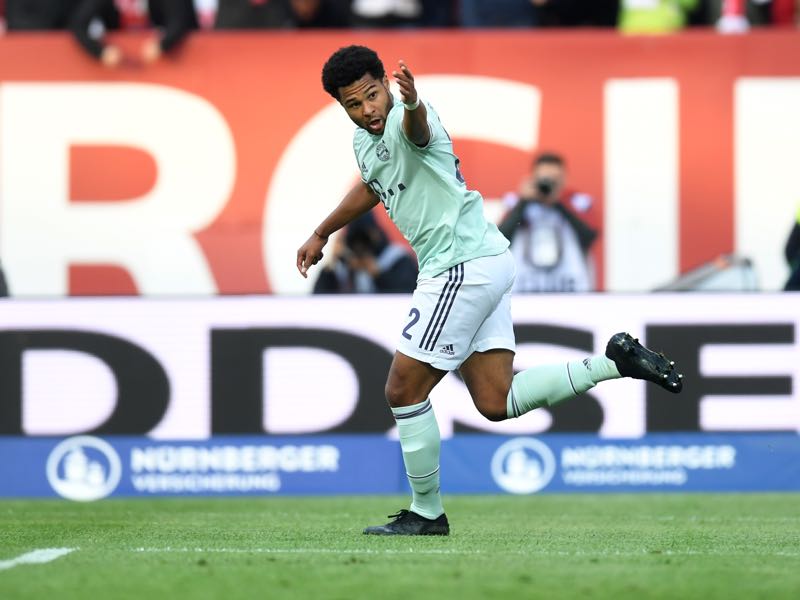 Dortmund and Bayern dropping points on the same matchday is peak Bundesliga. It also highlights the competitiveness of a league in which every team can beat everyone. In fact, Nürnberg should have collected all three points today.