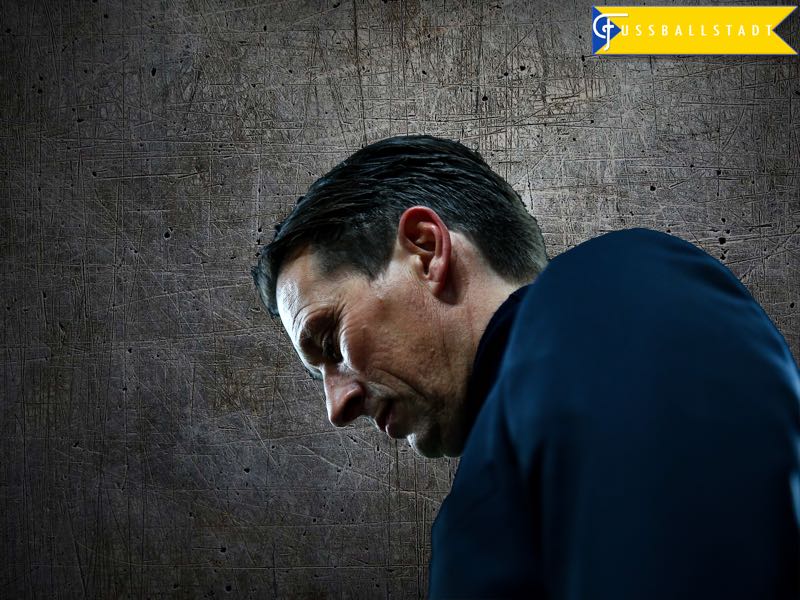 Take a close look at Roger Schmidt and you may see, flickering in the low German winter sun, tiny flecks of teflon. In a Hinrunde that witnessed seven managerial departures a non-stick coating is one potential answer as to why the Leverkusen coach is still at the BayArena.

While other club’s head coaches have fallen on their sword, it is those around Schmidt that have paid the biggest price at Leverkusen. Changes in the scouting staff, coaching team, fitness team­—and even as recently as January—changes in the higher management have all, so far, been unable to quell the ever-increasing rot.

The latest addition to Schmidt’s backroom team is Jörn Wolf. He was brought in to specifically address better communications between the players, staff and psychology team. With changes in crucial backroom staff having little on-field effect it may be that the teflon is starting to wear thin on Schmidt.

Leverkusen’s form this season is like a tachycardia graph

Leverkusen’s fluid league placing for the season reads like a tachycardia graph and with displays to test even the staunchest of Bayer hearts there must come a time where the finger of blame points at the head coach himself—not those around him.

Sporting Director Rudi Völler, a fervent supporter of Roger Schmidt, has backed his head coach many times during the season. However, in October 2016 Völler did appear to place some pressure on the former player turned coach by saying in an interview with kicker: “He has, of course, our support, but he knows that results need to be delivered, Roger Schmidt knows that it is required, because one thing is clear: we do not go back from our expectations.”

The comments from Völler came after a particularly poor run of form for die Werkself that saw four defeats in their opening eight games, which left them languishing in 11th place. For a team that automatically qualified for the Champions League group stage— thanks to a third-place finish in the previous Bundesliga campaign—the opening few months of season 16/17 had been a bitter disappointment.

Not for the first time in Leverkusen’s history they were again becoming to look like the “nearlymen”. Promising so much but delivering very little in return.

Bayer Leverkusen have done everything to support Roger Schmidt

Whatever direct, or indirect, pressure Völler wished to push towards Schmidt after the defeat to Hoffenheim on Matchday 8 it seemed to have an immediate effect. Matchday 9 and 10 saw victories against Darmstadt and Wolfsburg. What followed, however, were back to back defeats over the following two Matchdays, which reaffirmed Schmidt’s precarious position.

Leaking five goals to the Bundesliga’s first and second placed sides it was evident that there was a lack of cohesion within the squad. A defeat to Ingolstadt in mid-December exposed serious flaws within Leverkusen’s game plan. There seemed to be a disconnect between the three areas on the pitch. The defence looked disjointed, the midfield had no rhythm and, more surprisingly, the forward line were finding it difficult to poke home even the simplest of chances.

Chicharito finally got going again after the relationship was repaired at the Florida Cup. (PATRIK STOLLARZ/AFP/Getty Images)

Mexican star Javier ‘Chicharito’ Hernández (for more on this check out our Bundesliga Gegenpressing Podcast) was made the scapegoat and as the midwinter break approached it looked like the striker could be sold. Christmas brought a time of reflection and when the squad departed for their Florida winter training camp it looked like Schmidt was prepared to work with the underperforming star.

The American sun looked to have done the trick, along with the newly appointed Jörn Wolf. Leverkusen flew out of the winter break and destroyed highflying Hertha Berlin 3-1. Even Chicharito was back in on the act, this time turning provider for Ömer Toprak after only 12 minutes, had Schmidt turned the corner?

Unfortunately for Leverkusen the answer seems to be no. After playing some scintillating attacking football for 45 minutes against Gladbach on Matchday 18 they went into the half-time break 2-0 up. What followed in the second 45 minutes was one of the biggest collapses seen in the Bundesliga for a long time.

Two quick Gladbach goals cancelled out Leverkusen’s first half advantage. Then on 71 minutes their misery was complete as Gladbach’s Raffael outmuscled the normally reliable Jonathan Tah to put the game beyond Bayer.

As fixtures go this was a disaster, Leverkusen crumbled and the watching Schmidt could offer little. Three tactical substitutions failed to address any of the obvious issues. His game plan had been worked out, and bettered, by Dieter Hecking in 15 half-time minutes. 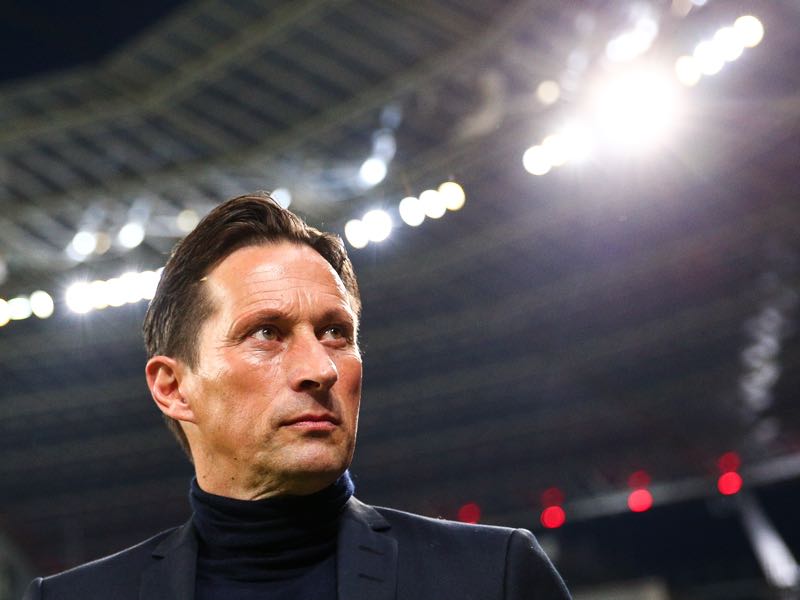 With Bayer having gone out of their way to provide the perfect environment for their head coach the pressure is now on Roger Schmidt to succeed. (Photo by Maja Hitij/Bongarts/Getty Images)

Leverkusen find themselves in eighth, the top four a disappearing dream—the relegation playoff only three poor results below them. Without doubt Leverkusen could find themselves in a scrap come the end of February. With four difficult upcoming fixtures their atrocious roller-coaster form must be addressed.

Roger Schmidt – A major test awaits in the Champions League

The Champions League may offer some solace to Leverkusen but a tough last 16 tie against Atlético Madrid looks an almost impossible mission based on current play. The side from the Spanish capital will be overwhelming favourites to progress.

Matchday 19 sees a difficult trip to the Volksparkstadion and anything less than three points could see the final coating of Teflon disappear from Roger Schmidt. With an expenditure of €43 million in the closed season Roger Schmidt’s return on Leverkusen’s investment has been poor.

Factor in his inability to deviate from a 4-4-2 system and questions begin to surface on the ex-Red Bull Salzburg coach’s tactical ability. As we approach the unfortunate anniversary where Roger Schmidt’s lack of self-control disrupted a top-flight game—in scenes reminiscent of a kindergarten as opposed to the Bundesliga—once again the ability and temperament to work with the very best players comes into question. A team containing Bernd Leno, Toprak, Tah, Kevin Kampl, Julian Brandt and Hernández should not be misfiring on such a consistent basis.

When all those around you have changed, and results stay the same, at some point Völler must turn his attention to the only constant: HIS head coach.