Labeled the game of the century by the Austrian press, the game lived up to its billing from the very start. Both sides pressed high, leading to plenty of turnovers on either end. It also meant there were plenty of chances. Sadio Mané had a shot turned away by Cican Stanković (19′) minute, Mohamed Salah missed the open target (19′) and then finally Naby Keïta appeared to have taken the lead, Stanković stopped the midfielder in his tracks (45′). On the other side Hee-Chan Hwang (7’), Enock Mwepu (22’) and Erling Haaland (25’) tested Alisson.

Salah, in particular, was wasteful; the Egyptian missed the open net (49’) and then had the ball taken off his food by Stanković (50’). Going straight the other way, Haaland rushed into the box, but his shot was off the target. Then within just a few minutes, Liverpool wrapped the game up. First Mané circled Stanković and then found Keïta, who scored with an easy header (57’) and then just one minute later, Stanković, found himself rounded again, this time by Salah the Egyptian then scored from an impossible angle. Salzburg were beaten but did not give up and produced a couple of good chances on breakaway opportunities but not enough to threaten the result tonight in Austria. 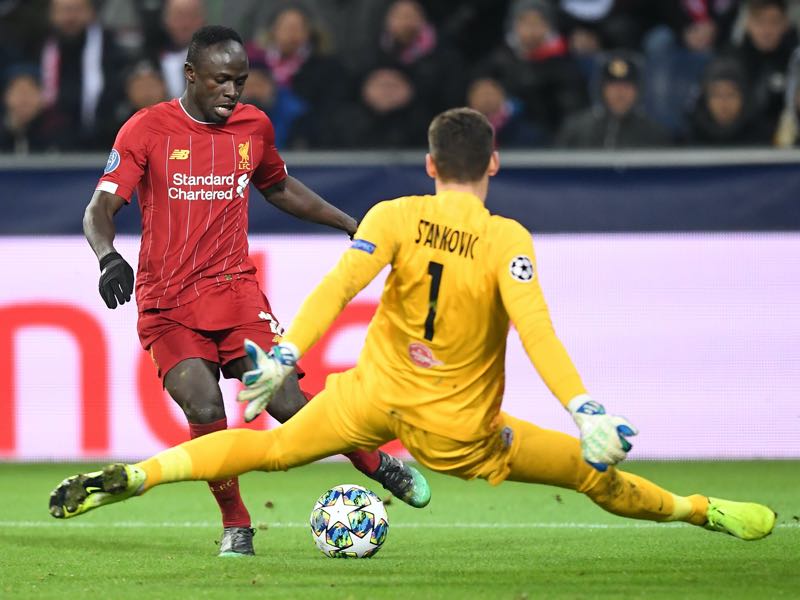 One of two former Red Bull players on the pitch today, the other one was Naby Keïta. The forward was always dangerous and at times, unplayable for Salzburg’s defence. Like the entire Liverpool attack, however, he struggled a bit when it came to making the most of his opportunities. Finally, in the 56th minute, he masterminded Liverpool’s lead when he rounded Stanković and then chipped the ball to the centre where Keïta headed the ball into the open net for a fantastic Red Bull co-corporation.

At one point, it appeared that this could be a nightmare game for Mohamed Salah. The forward produced countless opportunities but either missed the net or saw his shots stopped by Stanković. His two open net misses, in particular, seemed out of character. But then he capped the game off for Liverpool, scoring in what was the most difficult of the opportunities he created this evening when he first rounded Stanković and then scored from a very difficult angle.

The Norwegian was immensely hyped going into this match. There is no doubt that Haaland is one of the biggest talents in world football at the moment. But tonight, he struggled a bit to make the most out of his few opportunities. Haaland missed a big chance in the first half and then again in the second half. The first half, chance, in particular, was costly as Salzburg were very much taking the game to Liverpool at that stage, and a goal could have changed the complexity of the game.

“It is incredible to see the development and it is an advantage for us in the moment,” Marsch said on Monday.  I like our chance tomorrow; we got a great group an,d we are ready for a great moment. I said after the Gent game: ‘why not.'” Despite the confidence, this was always going to be a bonus game for Salzburg. The Austrians knew that it would be a difficult task against the European champions.

Nonetheless, Salzburg can be proud of the way they approached the game and handled the pressure throughout the first 45 minutes. The Red Bulls were always in the match in the first interval and, even in the second half, had chances. Ultimately, it was a brief moment of lack of concentration that led to two goals against a side that showed its full experience tonight. Liverpool might have missed a few too many opportunities but deserved the three points tonight.