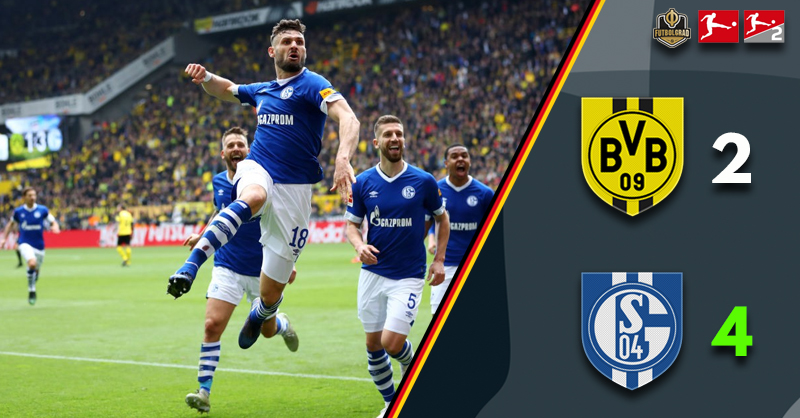 Schalke stun Dortmund as they derail their title charge

The 175th Revierderby had it all – an early goal, a penalty and two red cards. Borussia Dortmund vs Schalke 04 was the epitome of a derby match, but has the result handed Bayern München their seventh title in a row?

There can’t be many more nervous scenarios – when you are battling for your first league title in seven years – than having to face your fiercest rivals and closest neighbours in a ‘must win’ game.

However, that is exactly what stood between Borussia Dortmund and a potential return to the top of the Bundesliga. Their Revierderby opponents – Schalke 04 – have had a horrendous season, fighting the prospect of relegation when 12 months prior they had their sights set on a second place finish.

There seemed to be no derby day upset on the cards after just 10 minutes – Mario Götze nodded home a Jadon Sancho lofted pass. It was the Englishman’s 14th assist of the season and it equalled a nine-year-old record for the teenager.

The early goal left Schalke with a major problem, Die Königsblauen hadn’t managed to overturn a deficit to win a match for any of their Bundesliga games this season – surely to do it at the Westfalenstadion would be too much of an ask for the 15th placed side?

What followed was a remarkable turnaround, helped in some way by a VAR call for what looked to be an innocuous challenge. Referee, Felix Zwayer made his way to the pitchside monitor on 17 minutes – after consulting the video replay he pointed to the spot, Julian Weigl judged to have used his hand to block Breel Embolo’s shot.

For all the discussion around just what constitutes handball these days, the reviewed footage showed Weigl’s left arm was out – maybe for balance – but the ball did clearly strike it.

Daniel Caligiuri made no mistake from 11 meters, Schalke were back in a match that looked beyond them, fortunate or not – they had taken full advantage of their opportunity.

If the visitor’s equaliser had a stroke of fortune attached to it then their second goal 10 minutes later certainly did not. Salif Sane embarrassed the Dortmund defence by powering home his header from Caligiuri’s corner.

Exposed in the Allianz Arena a few weeks ago, Dortmund once again showed their weakness from set pieces. As the half time whistle sounded, Schalke had the lead after 22% possession and just two shots on target.

For all their possession, Dortmund’s problem had been breaking down a resolute Schalke defence. The visitor’s backline and midfield shape had thwarted Die Schwarzgelben’s efforts to create anything of note after the 10th minute.

Schalke knew what they had to do – after overturning the scoreline they needed to remain disciplined in shape, if not play. The yellow card count began to rack up as Hubb Steven’s side looked to frustrate their hosts with fouls – breaking up the Dortmund rhythm.

Out of nowhere, Dortmund’s day suddenly got worse. Marco Reus issued a straight red card for his challenge on Suat Serdar. The Borussia captain could have no complaints, his tackle from behind raked down Sedar’s Achilles.

Caligiuri whipped the resulting freekick into the net, 3-1 and a player advantage – Schalke now looked destined for their first win in the Westfalenstadion for seven years.

The hosts needed to remain calm, they didn’t – five minutes after Reus’ dismissal – four minutes after the hour mark – Dortmund were reduced to nine men. Marius Wolf made the exact same mistake as Reus – on the same player.

The fixture then became a nasty one, as players from both sides flew into tackles – as if they wanted to get sent off. Weston McKennie was lucky just to receive a yellow on 72 minutes.

Axel Witsel gave the home side hope on 85 minutes as he reduced the deficit to one goal, but Embolo broke yellow and black hearts as he hit a Schalke fourth just 70 seconds later.

Borussia Dortmund vs Schalke 04  – Man of the Match – Daniel Caligiuri 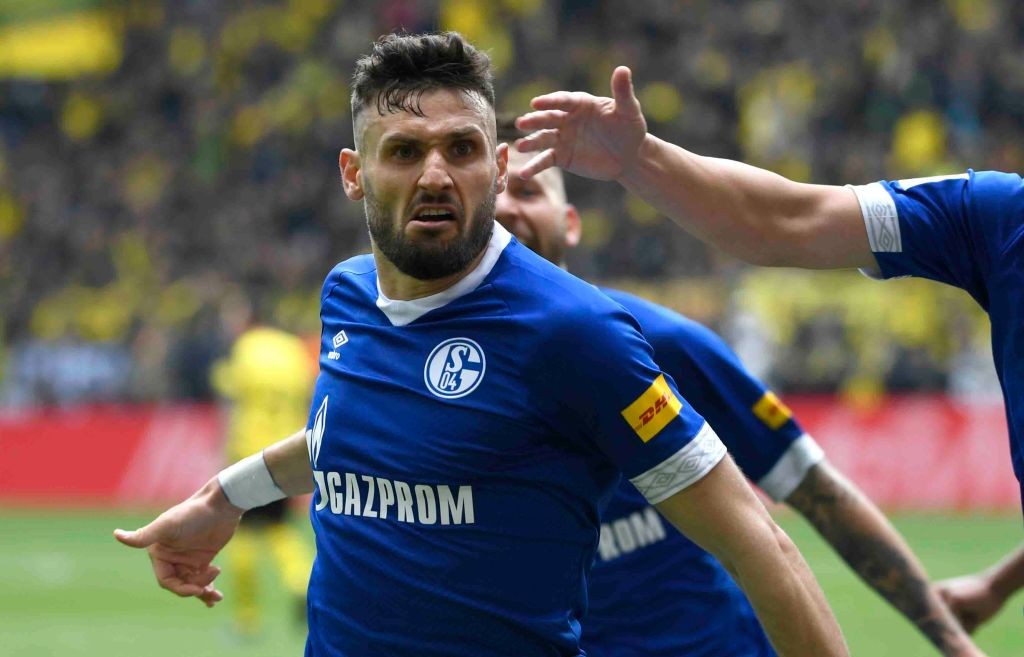 With two goals and an assist, there was only one real candidate for man of the match in the 175th Revierderby. The 31-year-old has now been directly involved in 6 goals (3 goals, 3 assists) in the last four meetings between the two sides.

On a day that almost certainly secured Schalke’s place in the Bundesliga, they can thank their midfielder for being the engine of a wonderful performance that will live long in the memory of those from Gelsenkirchen.

Is that it, has this disastrous performance all but allowed Bayern Munich to lift their seventh straight Bundesliga title? You would expect so – at the time when Dortmund needed to be at their very best they performed to their very worst.

Ill-discipline was matched by an inability to create any real opportunities of worth for 75 minutes. For the first time in 10 years, Dortmund leaked 3 goals from set pieces – not the display required of champions.

A fourth goal was just the visitor’s icing on the cake and will have been celebrated as wildly in München as it was in the blue corner of Signal-Iduna Park.